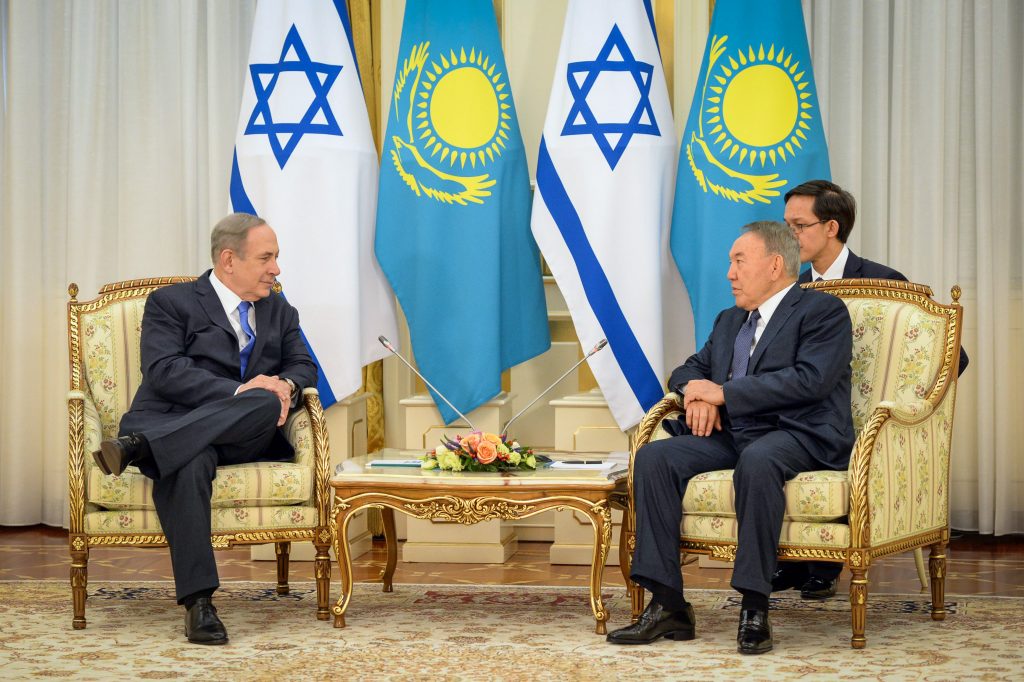 The path to a seat for Israel on the United Nations Security Council could run through Kazakhstan, a Muslim central Asian country with a history of opposing Israel in U.N. voting.

As Israeli Prime Minister Binyamin Netanyahu told a press conference in in the Kazakh capital of Astana on Wednesday, “We helped you get accepted as a member of the Security Council and now we are asking you to help us be a member of the Council as well.”

Israel faces competition from Germany and Belgium for a two-year seat on the Council starting in 2019, and Netanyahu hopes that Kazakhstan will reciprocate for Israeli support for its turn, which begins in January.
Israel is the only country in the Mideast – and one of 67 countries in the U.N., many of whom are small island states – that has never sat on the Security Council, despite its frequent deliberations concerning Israel and the Palestinians.
“I must tell you that I said that my hope is, and I say this to all our friends, that the great partnership that we are building here will also be reflected in international forums like the U.N.,” Netanyahu said.

If so, it would represent a turnabout in the country’s policy toward Israel, which until recently has voted against it in the U.N.

Ties between the two countries have been growing. The Sunni Muslim country with a secular regime is rich in mineral resources, and supplies Israel with about 20 percent of its oil, worth an estimated $700 million a year.

President Nursultan Nazarbayev said at the press conference that he has asked for Israel’s help in training its special forces in counter-terror operations and he hopes for more cooperation with Israel in agriculture and technology, all common themes in Netanyahu’s travels abroad in Africa and elsewhere in recent months.

When asked by Nazarbayev if he wished to convey a message to Iranian President Hassan Rouhani, set for a visit to Kazakhstan next week, Netanyahu said: “Don’t threaten us, we are not a rabbit, we are a tiger. If you threaten us you endanger yourself.”
Earlier on Wednesday, Iranian Supreme Leader Ayatollah Ali Khamenei predicted that Israel will not exist 25 years from now.

When he was asked by his host if he sincerely believed that Iran really wants to destroy Israel, Netanyahu answered, “Yes, I do believe it.”

While in Astana on Wednesday, Netanyahu visited the Great Synagogue, where he attended an event together with members of the local Jewish community.