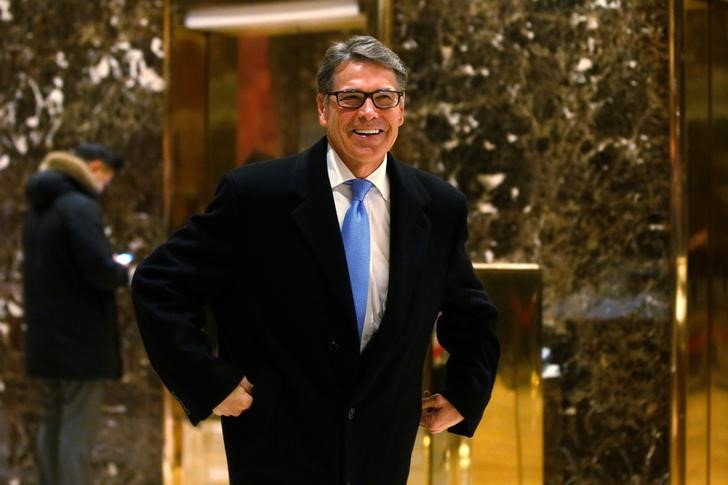 Former Texas Gov. Rick Perry is President-elect Donald Trump’s choice to lead the Energy Department, according a source close to the president-elect. The former Republican campaign rivals met for about 90 minutes Monday.

Energy is the department that Perry vowed to eliminate during the 2012 campaign but couldn’t remember in his infamous “oops” moment — a memory lapse during a 2011 GOP debate that hobbled his presidential ambitions. It’s unclear whether his mission in Trump’s administration would include disbanding the department.

Perry is expected to face scrutiny over his ties to the energy industry. When he left office, he joined the corporate boards of two companies run by Dallas billionaire Kelcy Warren. And in his long Texas political career, he drew significant campaign donations from energy executives.

On Monday afternoon, Perry strode past reporters and photographers at Trump Tower, boarding an elevator without making eye contact. He returned to the lobby about 90 minutes later and bumped into retired Army Gen. Michael Flynn, Trump’s pick for national security adviser, waiting for an elevator back upstairs. They chatted briefly. Perry flashed a thumbs-up to a passer-by.

Perry had his first interview at Trump Tower on Nov. 21, stoking rumors that Trump might find a spot in his administration for a man who, during the GOP primaries, called him a “cancer on conservatism.” Perry threw his support to Sen. Ted Cruz, a fellow Texan, as the field narrowed, but eventually came around and served as an enthusiastic campaign surrogate for Trump.

On his first trek to Trump Tower, last month, speculation raged that Trump was eyeing him for a number of cabinet spots, including Defense, Agriculture and Veterans Affairs. Perry was state agriculture commissioner before he became lieutenant governor, and he’s an Air Force veteran. Trump aides said afterward that they had discussed homeland and border security and immigration policy, along with military issues and the fight against ISIS.

Much of the Energy Department’s efforts in recent years have been focused on nuclear energy and handling and disposal of fissile material.