The Dow finished at an all-time high for the seventh consecutive trading day. The biggest gain went to IBM, while Apple and Exxon Mobil also finished near the top.

Energy companies rose for the ninth day out of the last 10 as investors anticipated steadier oil prices and larger profits. Technology companies also jumped. They had mostly lagged the market during its post-election rally, but have moved higher in the last few days.

J.J. Kinahan, TD Ameritrade’s chief strategist, said stocks have surged since the presidential election because after a long campaign, investors have a better idea which policies the country will adopt.

“The biggest questions hanging over us are gone,” he said. 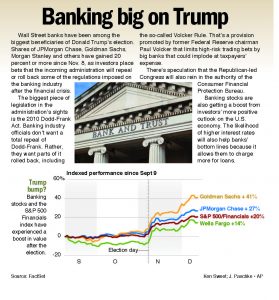 OPEC countries agreed on Nov. 30 to trim oil production next year, and over the weekend a group of 11 other nations also agreed to make cuts. Those reductions are intended to prop up the price of oil following a two-year slump. U.S. crude is up 17 percent since the OPEC deal was announced, which has taken it to its highest price in almost a year and a half, and the S&P 500 energy index is up 10 percent.

Technology companies jumped as a group of tech executives, including the CEOs of Apple and Microsoft, prepare to meet with President-elect Donald Trump on Wednesday. Kinahan said investors in technology companies may be looking forward to tax changes that will encourage them to bring more cash back to the U.S. and invest it in their businesses or return it to shareholders.

Some companies that have performed very well over the last five weeks lost ground. Basic materials and industrial companies traded slightly lower. Banks, which have soared since the election, rose less than the rest of the market.

Larger companies did much better than smaller ones. The Russell 2000 index of small company stocks, which has soared since the election, was essentially flat. 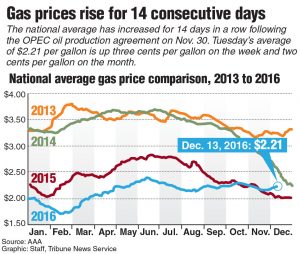 \Japanese brewer Asahi Group said it will pay $7.8 billion to buy five beer brands in Eastern Europe from Anheuser-Busch InBev, the maker of Budweiser. The brands include Pilsner Urquell. In October AB InBev bought rival SABMiller, and during those negotiations Asahi bought a group of Western European brands including Peroni and Grolsch. AB InBev picked up $1.36, or 1.3 percent, to $105.05.

Investors expect the Federal Reserve to raise interest rates when it ends a policy meeting Wednesday. The central bank last raised interest rates a year ago. It’s kept rates very low since the 2008 financial crisis, but its leaders have suggested the U.S. economy is improving enough that it is time to start gradually raising rates. Low interest rates have helped drive stock prices higher, but they punish savers who look for income from bank accounts and bonds.

U.S. government bond prices rose slightly. The yield on the 10-year Treasury note dipped to 2.47 percent from 2.48 percent, its highest level since June 2015.

The FTSE MIB in Italy jumped 2.5 percent and UniCredit, the largest Italian lender, soared 16 percent after it said it will unload $18.8 billion in soured loans, raise billions in cash, and cut thousands more jobs.