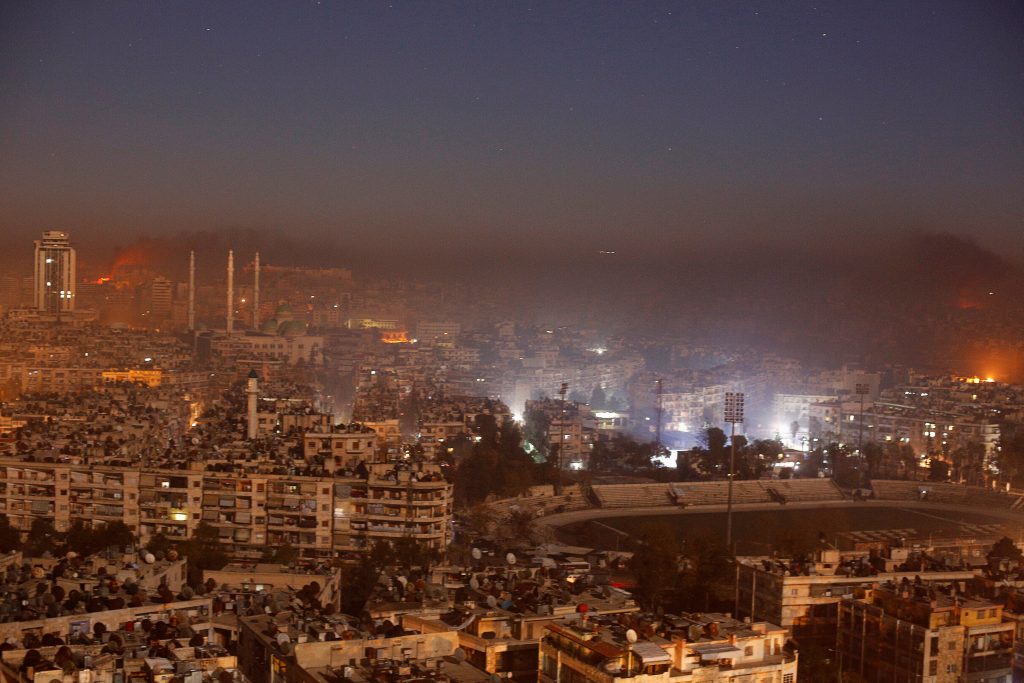 The Syrian army and its allies are in the “final stages” of recapturing Aleppo after a sudden advance that has pushed rebels to the brink of collapse in a shrinking enclave, a Syrian general said on Monday.

A Reuters journalist in the government-held zone said the bombardment of rebel areas of the city had continued non-stop overnight, and a civilian trapped there described the situation as resembling “doomsday.”

“The battle in eastern Aleppo should end quickly. They (rebels) don’t have much time. They either have to surrender or die,” Lieutenant General Zaid al-Saleh, head of the government’s Aleppo security committee, told reporters in the recaptured Sheikh Saeed district of the city.

Rebels withdrew from all districts on the east side of the Aleppo river after losing Sheikh Saeed in the south of their pocket in overnight fighting, the Syrian Observatory for Human Rights said.

It meant their rapidly diminishing enclave had halved in only a few hours and Observatory director Rami Abdulrahman described the battle for Aleppo as having reached its end.

Syrian President Bashar al-Assad, backed by Russia, is now close to taking back full control of Aleppo, which was Syria’s most populous city before the war and would be his greatest prize so far after nearly six years of conflict.

The Russian Defense Ministry said that since the start of the Aleppo battle, more than 2,200 terrorists had surrendered and 100,000 civilians had left areas of the city that were controlled by militants.

“People run from one shelling to another to escape death and just to save their souls … It’s doomsday in Aleppo, yes, doomsday in Aleppo,” said Abu Amer Iqab, a former government employee in the Sukkari district in the heart of the rebel enclave.

State media footage from Saliheen, one of the districts that had just fallen to the army, showed mounds of rubble and half-collapsed buildings, with bodies still lying on the ground and a few bewildered civilians carrying children or suitcases.

While Aleppo’s fall would deal a stunning blow to rebels trying to remove Assad from power, he would still be far from restoring control across Syria. Swathes of the country remain in rebel hands, and on Sunday Islamic State retook Palmyra.

Tens of thousands of civilians remain in rebel-held areas, hemmed in by ever-changing front lines, pounded by airstrikes and shelling, and without basic supplies, according to the Observatory, a British-based monitoring group.

Rebel groups in Aleppo received a U.S.-Russian proposal on Sunday for a withdrawal of fighters and civilians from the city’s opposition areas, but Moscow said no agreement had been reached yet in talks in Geneva to end the crisis peacefully.

The rebel official blamed Russia for the lack of progress in talks, saying it had no incentive to compromise while its ally Assad was gaining ground. “The Russians are being evasive. They are looking at the military situation. Now they are advancing,” he said.

The Syrian army is backed by Russian warplanes and Shiite militias supported by Iran. The mostly Sunni rebels include groups backed by the United States, Turkey and Gulf monarchies as well as hardline jihadists who are not supported by the West.

A correspondent for Syria’s official SANA news agency said the army had taken control of Sheikh Saeed, and more than 3,500 people had left at dawn.

A Syrian official told Reuters, “We managed to take full control of the Sheikh Saeed district. This area is very important because it facilitates access to al-Amariya and allows us to secure a greater part of the Aleppo-Ramousah road.” The road is the main entry point to the city from the south.

The loss of Palmyra, an ancient desert city whose recapture from the Islamic State terror group in March was heralded by Damascus and Moscow as vindicating Russia’s entry into the war, is an embarrassing setback to Assad.

The Observatory reported that the jihadist group carried out eight executions of Syrian soldiers and allied militiamen in Palmyra on Monday while warplanes bombarded their positions around the city.

Another four people, including two children, were shot dead while the terrorists cleared the city, it said.

The Observatory said at least 34 people had died in air raids on an Islamic State-held village north of Palmyra, and that local officials said poison gas had been used. Islamic State accused Russia of the attack. Both Russia and Syria’s military deny using chemical weapons.

The Russian Defense Ministry said on Monday that 728 rebels had laid down their weapons over the previous 24 hours and relocated to western Aleppo. It said 13,346 civilians left rebel-controlled districts of Aleppo over the same period.

The Observatory said that four weeks into the army offensive at least 415 civilians, including 47 children, had been killed in rebel-held parts of the city.

Hundreds had been injured by Russian and Syrian airstrikes and shelling by government forces and its allies on the besieged eastern part of the city.

The Observatory said 364 rebel fighters had been killed in the eastern sector. It said rebel shelling of government-held west Aleppo had killed 130 civilians, including 40 children. Dozens had been injured.