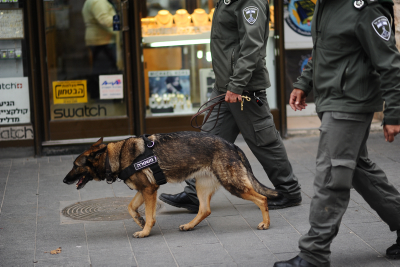 Border Guards and police early Monday uncovered a large warehouse where weapons and contraband were being stored. It’s not known if the weapons were to be used by terror groups or criminal groups, but security officials said that there was a strong possibility that they would be used for both. The items were found due to the efforts of search dogs, who uncovered them in an unlikely place.

The weapons and other items were found in the Ramat Chovav area outside Be’er Sheva. The buildings where the items were found were illegally constructed. Some of the drugs and weapons were discovered under a concrete platform, that was solidly placed down on a floor and did not appear to provide any access. The items were found by special weapon- and drug-sniffing dogs. Two individuals of the Bedouin Arab community, one in his 20s and one in his 40s, were arrested in connection with the case.