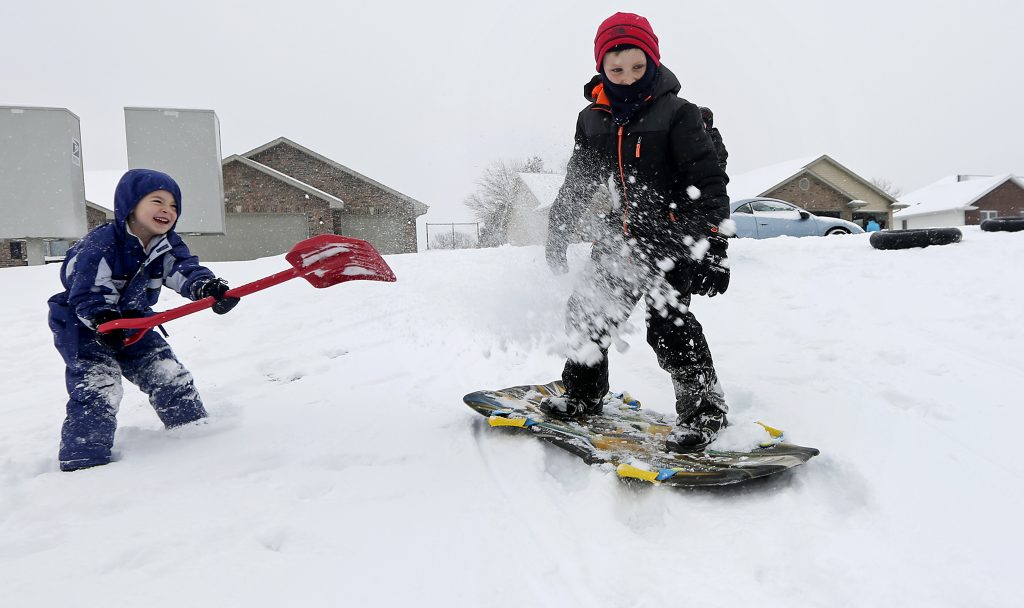 Rain, freezing rain and snow made for a messy commute and closed hundreds of schools Monday as a winter storm pushed eastward.

The National Weather Service issued winter storm warnings and winter weather advisories for parts of the Great Lakes and the Northeast. Authorities said there were numerous crashes on the Maine Turnpike, and a crash on a local road in Gorham, Maine, resulted in one death and four others being hospitalized.

Snow fell throughout northern New England, with speeds reduced on snow-packed roads and numerous school openings canceled or delayed. Into early Monday, the storm had dumped more than a half-foot on several states in the Midwest and Great Lakes regions, causing dangerous travel conditions.

The National Weather Service forecast snow across Vermont, New Hampshire and Maine with up to a foot of snow headed for parts of southern Vermont. Several inches were on the ground in parts of the region by Monday morning. Some rain was expected to mix with the snow in southern New Hampshire.

Parts of Portland had received about 4 inches of snow, and parts of northern Maine were expected to get up to nine inches. But that wasn’t enough to close down the Portland Fish Exchange, a Portland auction house that was prepping for the arrival of dayboat scallops later Monday.

“We’ve got a crew in here doing snow removal and repairs and whatnot,” said auction house general manager Bert Jongerden. “It’s pretty rare that we happen to close here. This is just a little bit of nuisance snow, really.”

Pats Peak Ski Area in Henniker, New Hampshire, had received 6 to 8 inches of snow by midmorning, and spokeswoman Lori Rowell said the ski area that opened Saturday with about half its trails available saw an increase in children who didn’t have school on Monday due to the weather.

“We love it,” Rowell said. “There are lots of kids there that took advantage of that opportunity.”

Hundreds of Michigan schools closed Monday as the state dug out from more than 10 inches of snow that fell over the weekend.

In southeastern Michigan, schools are closed Monday in Detroit and surrounding Wayne County, as well as counties including Macomb, Oakland, Washtenaw and Monroe. Wayne State University in Detroit is closed. And schools are shut in St. Clair and Lapeer counties.

The National Weather Service reports more than 10 inches fell in Lake Orion and Flat Rock. Parts of Macomb County got more than 9 inches.

Snow generally cleared out of the Chicago area on Sunday night, though there was snow falling Monday morning in some other parts of Illinois. The storms left Chicago-area freeways with patches of snow and ice, making travel more difficult. The area received more than 6 inches of snow as of Sunday night.

The Ohio River Valley and Mid-Atlantic regions were expected to receive a mix of snow, freezing rain and rain through the day on Monday.

“For the rest of the day the best advice is just to stay off the road if you can, and otherwise go slow and give yourself more time to reach your destination,” National Weather Service meteorologist Mark Steinwedel said. “If you don’t have to drive or go somewhere, stay home.”

Temperatures 15 to 30 degrees below average will follow the cold rain and snow in the coming days through much of the Midwest and East.