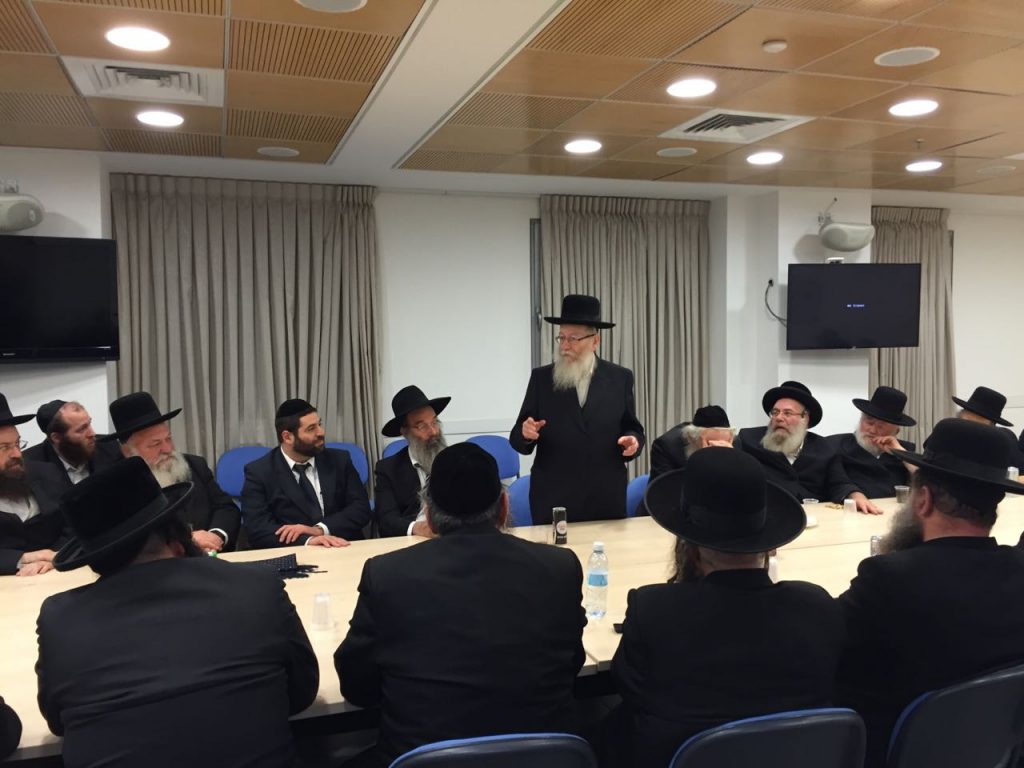 An emergency meeting was held by representatives of a number of communities to address an unprecedented and reprehensible incident that occurred this past Shabbos when secular elements entered a shul in Arad during davening and tried to disturb the mispallelim.

At the meeting, held at the initiative of Health Minister Rabbi Yaakov Litzman, a broad public protest was issued and various measures that will be taken were discussed, in an effort to ensure that such an incident will not happen again. “It is inconceivable that something that would not be done to Jews in enemy states, such as Iran, should be done to Jews here in Eretz Yisrael,” the speakers noted.

Rabbi Litzman, the meeting’s first speaker, said that there is a harsh trend of “establishment racism” in the city of Arad, initiated and sanctioned by the mayor. However, he noted, he had no intention of turning this into a political matter, even though the mayor is from the Yesh Atid party, which has fought the chareidim with all its might. Rather, Rabbi Litzman said, he will only discuss the desecration of the shul this past Shabbos by anti-religious public activists in the city and their abettors, who were brought to the scene to generate provocations and to prevent Jews from davening.

“Violation of a shul, with the stated intent of disturbing Yidden who are davening, is a red line and we need to raise a hue and cry,” he said. “We cannot condone this and therefore we have gathered here in an effort to arrange protests all over the country, under the auspices of Gedolei Yisrael, whose guidance we will seek.”

Bnei Brak’s deputy mayor, Rabbi Avraham Rubinstein, said that the public needs to be aware of what happened in Arad. The consequences of this incident are far reaching and the Jewish world cannot just let it pass quietly. “We will unite and do everything we can for the residents of the city, who traveled to an eretz lo zeruah. We must help them, and the entire chareidi sector. If we don’t do everything we can to prevent this, it will start in Arad and then continue to Herzliya and Raanana and everywhere else.”

Bnei Brak Mayor Rabbi Chanoch Zeibert said that everyone needs to unite with a joint purpose to prevent this event from turning into a trend. Focusing on the public dismay at the desecration of the shul is important because when a shul is desecrated and the mispallelim are prevented from davening — intentionally — it makes every Jewish heart recoil.

Deputy mayor of Yerushalayim Rabbi Yosef Deutsch said that “we see mayors who want to distance us in housing. We are hearing of this in Kiryat Gat and other places. What is happening in Arad will happen in other places if we do not fulfill our obligations and deal with this immediately, in a clear, sharp fashion.”

The deputy mayor of Bnei Brak Rabbi Menachem Shapiro emphasized that this would not have happened if the mayor had not been constantly working against the religious sector, which has led literally to incitement. There are people who are pained to have the chareidim in their city and they are responsible for the provocations and the incitement, he said. They need to be held directly responsible for what is happening. There is no community that will not feel solidarity with this protest — and we will bring the issue to Gedolei Yisrael for their decision.

City Councilor Rabbi Avraham Betzalel, representing Shas in Yerushalayim, noted that provocation in a shul is terrible and cannot be allowed to pass. This is a struggle that not only the chareidim will understand and defend; it is something the whole public can relate to.

Arad City Council member Rabbi Moshe Kavas shared with the participants some of the difficulties and harassment that the community in his city has suffered for years. Now, the mayor has gone even further with incitement to his activists, and the results are clear.

Deputy mayor of Modiin Illit Rabbi Tuvia Freund said that the incident is reminiscent of different times and difficult eras. It has happened before that all of chareidi Jewry was in shock because of the violation of a shul. That’s how it has been throughout the generations: a shul is violated. It is the most sacred thing to the soul; it cannot be condoned.

Yerushalayim City Councilor Rabbi Eliezer Rauchberger said that the general public will be able to relate to the protest because it is a moral violation, and the right messages need to be sent and steps need to be taken to make the rules of the struggle, and its justification, clear to all.

Yerushalayim City Councilor Rabbi Shlomo Rosenstein said that the protest steps will be taken in cooperation with the entire public, as there is no one who can remain placid in the face of what has happened. This is a struggle against us that will not stop — if we will not react properly and professionally.

The secretary of the Rabbinical Committee for Shabbos, Rabbi Yitzchak Goldknopf, expressed pain at the low level the perpetrators have sunk to. Jewry will be able to lead a clear and firm protest to prevent such things from happening again.

In conclusion, it was decided to form a task force to formulate the protest in complete cooperation with Gedolei Yisrael, who will guide them. The team will include Rabbi Yaakov Litzman, Rabbi Chanoch Zeibert, Rabbi Yosef Deutsch, Rabbi Menachem Shapiro and Rabbi Chaim Biton.