Israel Bennett: Amona Will Remain on the Hilltop
Israel 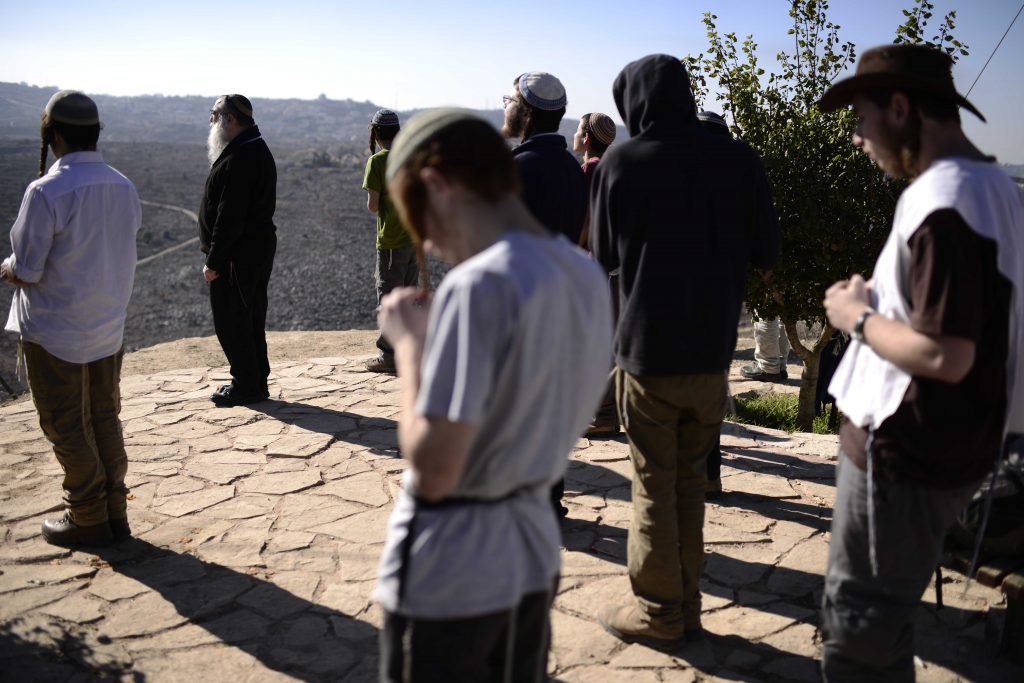 Education Minister and Jewish Home Chairman Naftali Bennett said Monday that a place on the Amona hilltop had been secured for residents of the houses that the High Court has ordered demolished. While there had been some question as to whether the parcels of land the residents were to be moved to were actually state land, or whether Arabs would claim the parcels and damage the plan to move the residents, Bennett said that after great efforts he had worked out the arrangement with Prime Minister Binyamin Netanyahu and State Attorney Avichai Mandelblit.

The state is supposed to demolish homes at Amona by order of the High Court by December 25, and the government has been desperately searching for a way to remove the residents without generating painful scenes of Jewish soldiers and police carrying off tearful and angry children and teenagers — scenes reminiscent of the 2006 Amona evacuation.

Under the plan developed by Bennett, Netanyahu and Mandelblit, the residents will move to parcels on the Amona hilltop that are currently being administered by the state under the Absentee Property Law. The evacuated residents will stay in those caravans for several months, until new homes in Shiloh that are to be built for them are ready. According to Israel Radio, the area on the hilltop to be allocated to the residents consists of several large parcels, a total of 25 dunams of land.

In 2006, the state forcibly evacuated residents from Amona. Then, police and officials of the Civil Administration evacuated and razed nine buildings, facing down 4,000 Israeli protestors in a traumatic operation that saw dozens of people, including three MKs, injured. Leading the country at that time was Ehud Olmert, who was acting Prime Minister after Ariel Sharon had a massive stroke in January. Both Sharon and Olmert, leaders of the Kadima party, had already shown their willingness to forcibly remove Jews from their homes a year earlier during the disengagement from Gaza and northern Samaria — and were bitterly criticized for both moves by Binyamin Netanyahu, the current prime minister. Netanyahu, needless to say, has been very anxious to avoid a repeat of those scenes during his administration, but residents have said they will not make it easy for them.

Amona residents said they had not yet seen the plan, but Bennett responded by saying that he would meet with residents and present them with full details later on Monday night. He added that he would meet with Rabbis, community leaders and activists to try and convince them to accept the deal. Last week, Amona residents said in a statement that they “will not bow to the will of the far left to destroy a flourishing settlement, to evict 200 children from their homes, and to call it ‘a good deal,’” as Prime Minister Binyamin Netanyahu and Jewish Home Chairman Naftali Bennett have termed the transfer of residents to the adjacent parcels of land. “True leadership is tested at the moment of truth, and for hundreds of thousands of people, Amona is the true test and symbol of the struggle for the Land of Israel. He who surrenders on Amona surrenders on Ofra, Beit El, Chevron, and the future of Jewish settlement in Yehudah and Shomron altogether.”

Meanwhile, the Settlements Arrangement Law, which its sponsors say will prevent further legal imbroglios in outposts like Amona, is undergoing preparation for its second and third reading, after passing its first reading last week. A report on Army Radio said that the bill will provide a maximum compensation of 125 percent of the value of the land Arabs are claiming. Under the law, Arabs who claim that Jewish homes are built on land they own — as is the case in Amona — will submit to an arbitration process that would provide them with compensation in land or money. The law will remove the responsibility for adjudicating these cases from the High Court.