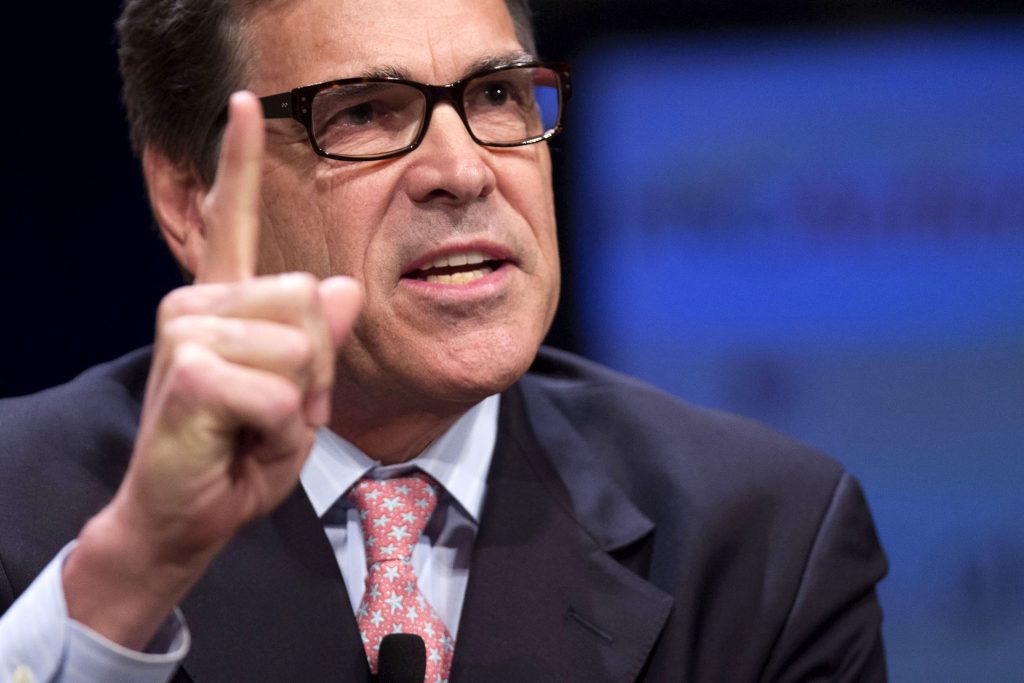 People familiar with the president-elect’s selection process said two Democratic senators from energy-producing states — Heidi Heitkamp of North Dakota and Joe Manchin of West Virginia — are also in the mix, along with Ray Washburne, a Dallas investor and former chairman of the Republican National Committee.

If Trump picks any of the four he will break with recent tradition of putting scientists at the top of the Energy Department. Among other things, the agency is responsible for policies on the safe handling of nuclear material.

Trump met with Perry and Washburne while attending the Army-Navy football game in Baltimore on Saturday. It was at least the second time he’d spoken to the two men for potential roles in the new administration. Trump met with Heitkamp at Trump Tower in New York on Dec. 2, and is scheduled to meet with Manchin in New York.

Jay Martin Cohen, a retired rear admiral of the U.S. Navy, is said to be Trump’s choice for undersecretary for Nuclear Security, the people said.

Two leading scientists have run the energy department during the Obama administration: Ernest Moniz, the incumbent, is a nuclear physicist who previously headed an energy initiative at the Massachusetts Institute of Technology. His predecessor was self-professed nerd Steven Chu, a Nobel laureate who directed the Lawrence Berkeley National Lab and was a professor of physics and molecular and cellular biology.

Perry, in a 2011 Republican primary debate, famously forgot that the Energy Department was one of the three federal government agencies he wanted to eliminate. The other two were the Commerce and Education Departments. The gaffe may have cost him a shot at the party’s 2012 nomination.

Texas’s longest-serving governor was indicted in 2014 for abuse of power and coercion after threatening to veto funds for a Travis County office that investigates corruption unless the district attorney, who had pleaded guilty to driving while intoxicated, resigned.

He serves on the board of Energy Transfer Partners LP, the company whose pipeline project has drawn opposition in North Dakota and has become a rallying cry from environmentalists. While the Obama administration has stalled the project, Trump has said federal approvals for energy infrastructure need to come quicker.

Trump has promised to unleash domestic oil, gas and coal production, largely by rescinding “job-killing” rules and environmental regulations, without detailing specific plans for the Energy Department and its nuclear-heavy policy portfolio.

A questionnaire circulated by Trump transition advisers within the Energy Department signals future scrutiny of the national labs and programs that the Obama administration has used to advance clean energy.

Trump’s advisers are exploring ways to restart a long-stalled plan to stash radioactive waste from the nation’s nuclear power plants at Nevada’s Yucca Mountain. They also are evaluating whether Energy Department policy can be used to help keep aging nuclear plants online longer.

Political considerations also may be a factor. Heitkamp faces a tough fight for re-election in two years as a Democrat in a Republican-leaning state that is at the epicenter of the Bakken shale energy-producing region. If a Republican is elected to succeed her in a special election, Heitkamp’s appointment would rob the narrowly divided Senate of a Democrat.

Heitkamp, 61, sits on the Senate Agriculture Committee and has been discussed for the post of agriculture secretary as well. A person familiar with the transition process said Trump and his advisers had been impressed with the first-term senator during her interview at Trump Tower this month.

If Manchin, 69, were picked, his Senate seat would be decided by Democratic governor Earl Ray Tomblin. According to the National Conference of State Legislatures, West Virginia is one of 36 states where the governor makes an appointment to fill a U.S. Senate vacancy, and the appointee serves until the next regularly scheduled statewide general election.

Manchin’s coal interests aren’t necessarily a natural fit for the Energy Department, which plays a limited role in the use of coal. The biggest intersection in recent years has come through programs meant to accelerate the technology that promises to “clean up” coal, by paring the traditional air pollution that comes from burning it as well as capturing the carbon dioxide emissions tied to its use for power.

The Energy Department’s portfolio is nuclear-rich; it oversees the national nuclear weapons complex and also is tasked with advocating nonproliferation and promoting nuclear security worldwide. Moniz played a high-profile role negotiating the nuclear deal with Iran.