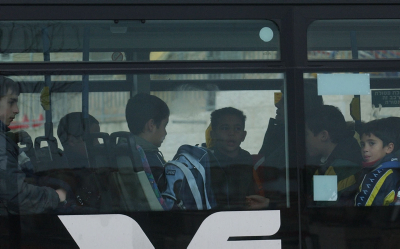 The Knesset Economics Committee has approved new rules presented by the Transport Ministry that will require all school buses and transport vans to install a device that will sweep the vehicle to ensure that no child has been forgotten before the driver leaves the vehicle. The device costs between NIS 500 and NIS 1,500, and tests have shown it to be very effective.

At a Committee meeting discussing the rules, Moshe Weizmann, director of the Ministry’s vehicle division, said the devices would be installed in 17,000 vehicles, with the program going into effect April 1, 2017. MK Rabbi Uri Maklev (United Torah Judaism), who heads the Knesset Science and Technology Committee, said that tests he had seen had proven the systems to be very effective.

However, several MKs and experts who attended the meeting pointed out that the main problem of “forgetfulness,” in which children were left in vehicles for hours in the blazing sun – some of them, R”l, dying – was not in school buses, but in private vehicles. According to Galit Gilad of the Beterem organization, there were 80 incidents in which children were forgotten in vehicles in 2015 – all of them, save for one, in private vehicles. Committee chairman MK Eitan Cabel said that he intends to deal with that issue in the coming year.

However, according to Weizmann, there are no systems today that are effective in private vehicles, but that the Ministry hoped to develop one with private companies. A tender for such devices will be issued soon, he said, with the government promising to buy a certain number of the devices, for distribution to the driving public.