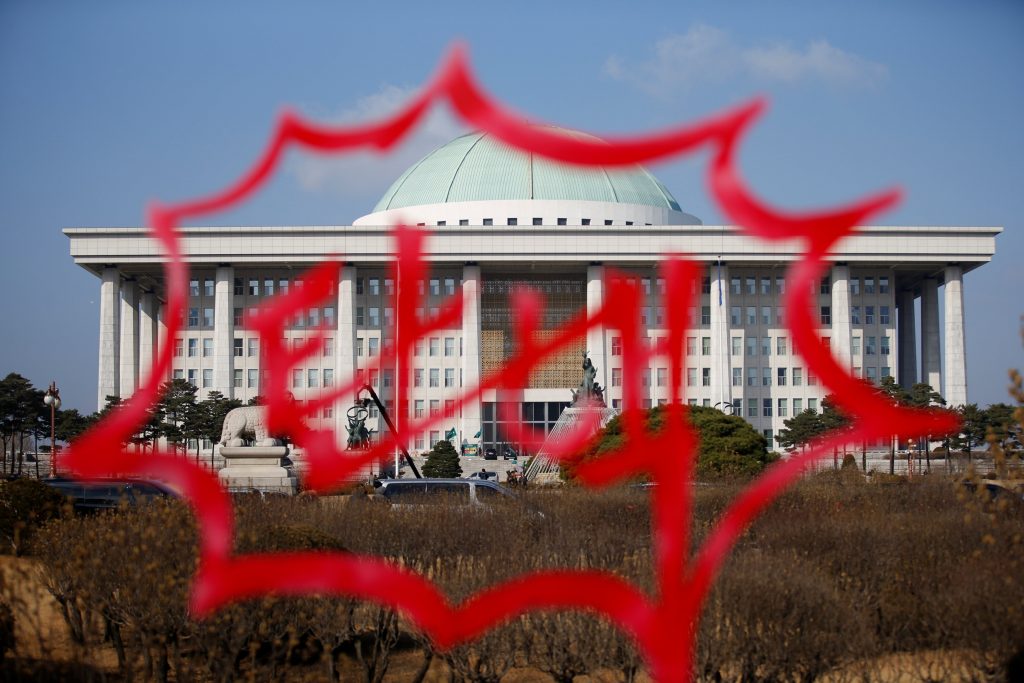 South Korean lawmakers on Friday voted overwhelmingly to impeach President Park Geun-hye over an influence-peddling scandal, setting the stage for her to become the country’s first elected leader to be pushed from office in disgrace.

Members of parliament voted by secret ballot with 234 in favor and 56 opposed, meaning dozens of members of Park’s own conservative Saenuri Party backed the motion to remove her. At least 200 members of the 300-seat chamber needed to vote for the motion for it to pass.

Seven votes were disqualified, two members abstained and one member did not participate, the parliament speaker said.

The Constitutional Court must decide whether to uphold the motion, a process that could take up to 180 days. Park’s duties were immediately assumed by Prime Minister Hwang Kyo-ahn on an interim basis.

Park, 64, is accused of colluding with a friend and a former aide, both of whom have been indicted by prosecutors, to pressure big businesses to donate to two foundations set up to back her policy initiatives.

Park, who is serving a single five-year term that was set to end in February 2018, has denied wrongdoing but apologized for carelessness in her ties with her friend, Choi Soon-sil.

Park has been under heavy pressure to quit but this week said she would await the court’s ruling on the impeachment vote.

Mass rallies have been held in the capital, Seoul, every Saturday for the past six weeks to press her to quit. Opinion polls show overwhelming public support for her impeachment.

Parliament was closed to the public on Friday on the orders of the speaker.

Hours before the vote, anti-Park activists scuffled with police as they tried to drive two tractors up to parliament’s main gate, where more than a 1,000 protesters were gathered. Police subsequently shut down traffic on a 10-lane highway in front of the parliament’s grounds and blockaded a bridge leading to the area.

The daughter of a military ruler who led the country for 18 years before being assassinated by his disgruntled spy chief in 1979, Park would lose presidential immunity if she left office early, and could be prosecuted for abuse of power and bribery, among other charges.

A poll released on Friday showed her approval rating at 5 percent, a slight improvement from a record low 4 percent.

The survey by Gallup Korea – which is not affiliated with U.S.-based Gallup, Inc. – showed 81 percent of respondents supported impeachment.

If the motion passes, the Constitutional Court will determine whether parliament followed due process and whether there are sufficient grounds for impeachment, a process that will involve arguments from the two sides in public hearings.

Prime Minister Hwang, who post is largely ceremonial, will assume interim presidential powers while the court deliberates. Hwang takes the helm at a time of heightened tension with North Korea.

South Korea’s economic outlook is also worsening, in part because of the internal political uncertainty, as well as worry about the impact of President-elect Donald Trump’s policies on trade and foreign affairs.

The 9-member Constitutional Court is considered conservative in its makeup but some of its former judges have said the case against Park is strong and was likely to be approved.

In 2004 parliament impeached then-president Roh Moo-hyun, suspending his powers for 63 days while the court reviewed the decision, which it overturned. The prime minister at the time, Goh Kun, said in a 2013 memoir that he had decided to stay “low key” while he held the reins of power.

“Even if his duty was suspended, President Roh was staying at the Blue House residence. There was no need to create unnecessary tension,” Goh wrote.