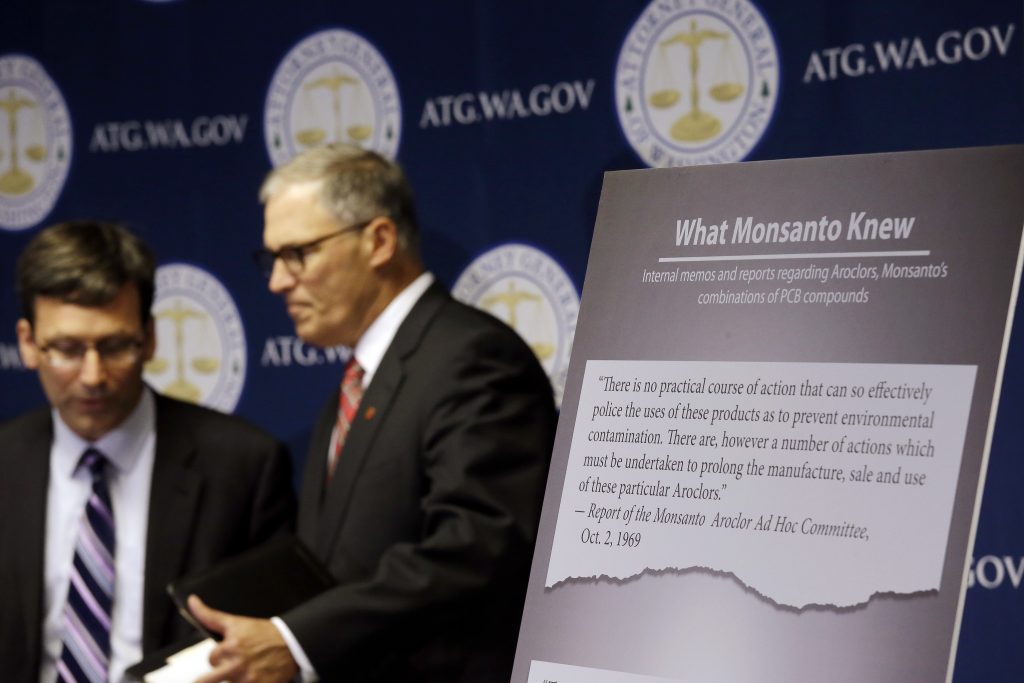 Washington on Thursday became the first U.S. state to sue the agrochemical giant Monsanto over pervasive pollution from PCBs, the toxic industrial chemicals that have accumulated in plants, fish and people around the globe for decades.

Democratic Gov. Jay Inslee and Attorney General Bob Ferguson announced the lawsuit at a news conference in downtown Seattle, saying they expect to win hundreds of millions or even billions of dollars from the company.

“It is time to hold the sole U.S. manufacturer of PCBs accountable for the significant harm they have caused to our state,” Ferguson said, noting that the chemicals continue to imperil the health of protected salmon and orcas despite the tens of millions of dollars Washington has spent to clean up the pollution. “Monsanto produced PCBs for decades while hiding what they knew about the toxic chemicals’ harm to human health and the environment.”

PCBs, or polychlorinated biphenyls, were used in many industrial and commercial applications, including in paint, coolants, sealants and hydraulic fluids. Monsanto, based in St. Louis, produced them from 1935 until Congress banned them in 1979.

According to the U.S. Environmental Protection Agency, PCBs have been shown cause a variety of health problems, including cancer in animals as well as effects on the immune and nervous systems.

Monsanto did not immediately return an email or phone message seeking comment Thursday. In response to a similar lawsuit filed last year by the city of Spokane, Washington, Monsanto said a previous incarnation of the company produced the PCBs, which it said “served an important fire protection and safety purpose.”

“PCBs sold at the time were a lawful and useful product that was then incorporated by third parties into other useful products,” Charla Lord, a company spokeswoman, wrote. “If improper disposal or other improper uses created the necessity for clean-up costs, then these other third parties would bear responsibility for these costs.”

Ferguson, a Democrat, pointed to internal Monsanto documents that show the company long knew about the danger the chemicals posed. In 1937, an internal memo said testing on animals showed “systemic toxic effects” from prolonged exposure by inhaling PCB fumes or ingestion. In 1969, a company committee on PCBs noted, “There is too much customer/market need and selfishly too much Monsanto profit to go out.”

“There is little probability that any action that can be taken will prevent the growing incrimination of specific polychlorinated biphenyls … as nearly global environmental contaminants leading to contamination of human food (particularly fish), the killing of some marine species (shrimp), and the possible extinction of several species of fish eating birds,” a committee memo said.

Nevertheless, Monsanto told officials around the country the contrary. In a letter to New Jersey’s Department of Conservation that year, Monsanto wrote, “Based on available data, manufacturing and use experience, we do not believe PCBs to be seriously toxic.”

Ferguson said that infuriated him. He noted that his great-grandparents settled along Washington’s Skagit River in the late 19th century. The Skagit was one of more than 100 water bodies in the state listed in the lawsuit as being polluted with PCBs.

“That river, the Skagit River, which my family depended on to a great degree in the 19th century as they homesteaded here, is now contaminated by PCBs, as are the fish,” he said. “That makes me mad.”

Ferguson said his office had been in touch with counterparts in other states, but it remained unclear if other states would follow Washington’s lead in suing the company.

Washington’s lawsuit seeks damages on several grounds, including product liability for what it described as Monsanto’s failure to warn about the danger of PCBs; negligence; and even trespass, for injuring the state’s natural resources.