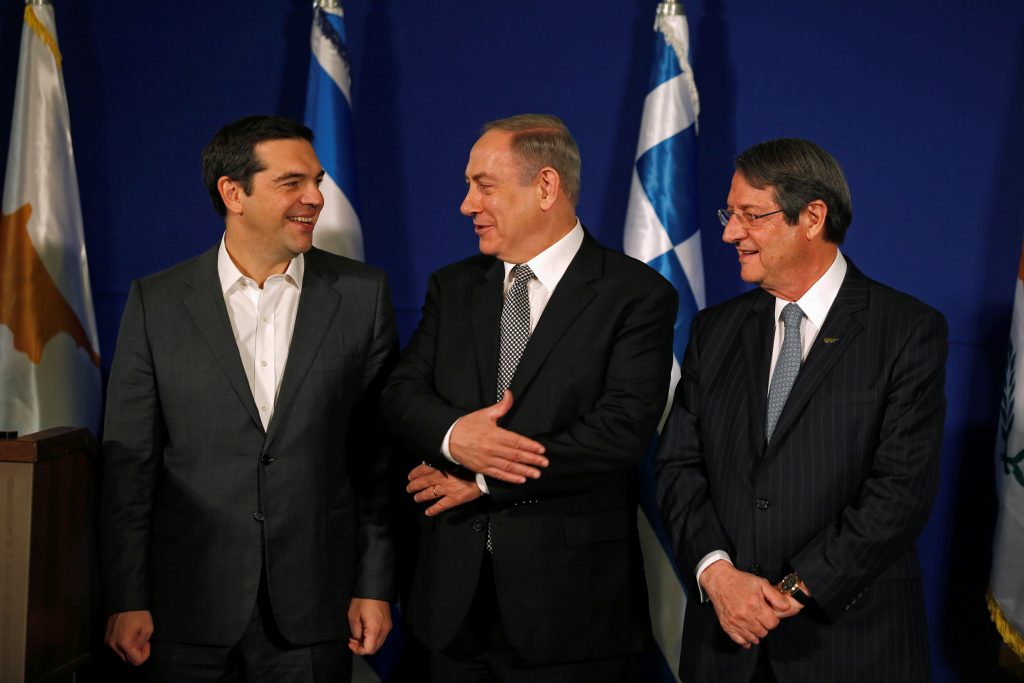 Prime Minister Binyamin Netanyahu, the president of Cyprus Nicos Anastasiades and Greek Prime Minister Alexis Tsipras met in Yerushalayim for their second summit. The first one took place in Nicosia in January of this year. The prime minister also had a private meeting with each of the leaders.

The second trilateral meeting reflects the close and tightening ties between the countries. Hamodia’s correspondent notes that the relations between the three countries are strategically important for strengthening the stability of a framework of countries with mutual interests in the region. A trilateral agreement was signed to advance technology and research and development for joint products. The next summit will take place in Thessaloniki next year.

“This is a meeting of genuine friendship. There are shared values between us. We are three democracies in the Eastern Mediterranean. We’ve come to the conclusion quite a few years ago that we have so much to gain by cooperating with each other and we’re doing that, point of fact, including with the new agreement we signed today,” Netanyahu said at the beginning of the meeting.

“A few days ago we had the help of firefighters from Cyprus and from Greece. The Greek firefighters put out fires of Haifa. It should be understood that this was invaluable help from both of you, deeply appreciated and we respond. We reciprocate. When you had recent fires in Cyprus we sent our planes. This is a concrete example of how this cooperation actually saves lives. But it can go well beyond that.

“We’ve just discussed the formation of a regional emergency force, multinational force, which will be not merely coordinated in times of crisis, but will actually have a joint command center, will involve not only our three countries but more countries that we’ll bring in, plan the construction, plan the buildup of these forces for firefighting, earthquakes, floods, search and rescue. This is I think an important idea and I’m glad that we have an agreement to move it forward and I think it will take our cooperation in this area to higher levels.

“We are dealing also with matters of economy, with research and development, energy – that’s a very big topic. We have gas fields, we have joint interests, we know want to explore the development of these gas fields and the provision of the gas to European markets. This is something that occupies our time and our attention. I hope we can move forward on it.

“We have tourists, a lot of tourists. We have more Israeli tourists going to Greece and Cyprus than we have the other way, but of course we have expectations for the future.

“But we welcome every form of cooperation between us. I think it’s developing in a great pace, and these summits afford us the opportunity to create more areas of cooperation for the benefit of all our peoples.

At the trilateral energy meeting between Israel, Cyprus and Greece, National Infrastructures, Energy and Water Minister Dr. Yuval Steinitz agreed with his counterparts that the three countries’ energy ministers would meet with the EU Energy Commissioner in order to advance the construction of the gas pipeline between Israel, Cyprus, Greece and eventually, Italy.