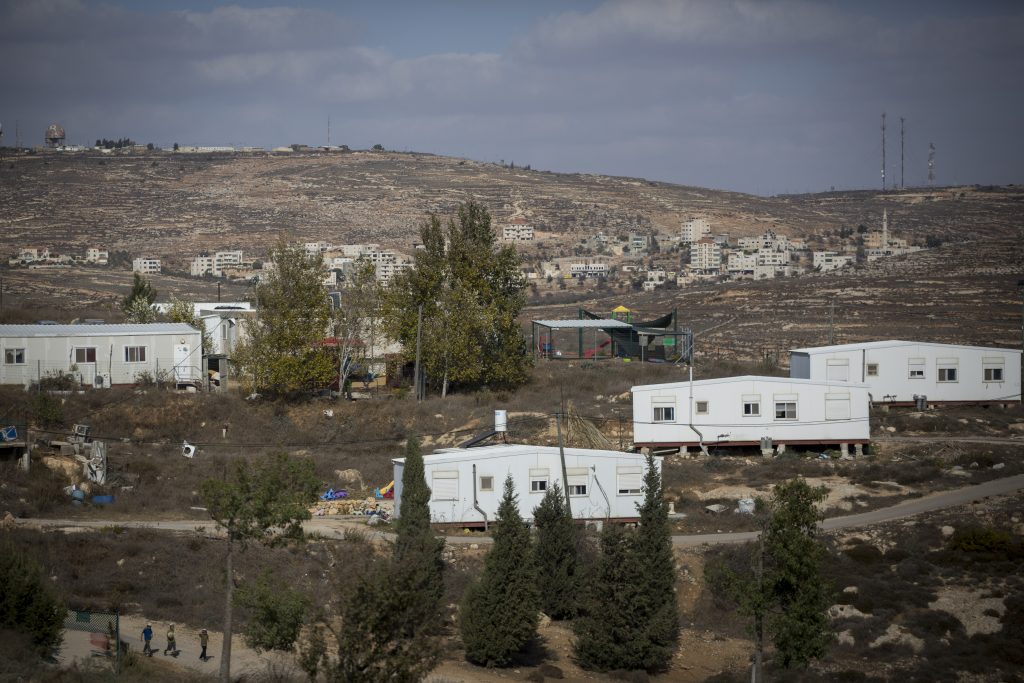 Residents of Amona on Thursday night issued an emergency call for supporters to gather at the hilltop community in order to prevent the forced evacuation of residents of homes the High Court has ordered to be demolished. Media reports Thursday said that hundreds of IDF soldiers were conducting drills in preparation for the forced evacuation of Amona residents. According to the residents, that evacuation is set to take place Motzoei Shabbos. They urged supporters to gather at Amona already on Thursday night, in order to bolster their numbers and make the evacuation more difficult, if not impossible.

The residents of the houses that the court has ordered torn down because they are built on land claimed by Arabs won’t have far to move. Caravans are to be set up on an adjacent plot of land on the Amona hilltop that is currently being administered by the state under the Absentee Property Law. Leftist groups have threatened to file petitions on behalf of Arabs who claim to own that land as well, but currently there are no official challenges to the state’s administration of the property in court. The evacuated residents will stay in those caravans for several months, until new homes that are to be built for them in Shiloh are ready.

Residents are banking on the reluctance of the current rightwing government to see a repeat of the situation in February 2006, when the state also forcibly evacuated residents from Amona. Then, police and officials of the Civil Administration evacuated and razed nine buildings, facing down 4,000 Israeli protestors in a traumatic operation that saw dozens of people, including three MKs, injured. Leading the country at that time was Ehud Olmert, who was the acting prime minister after Ariel Sharon had a massive stroke in January. Both Sharon and Olmert, leaders of the Kadima party, had already shown their willingness to forcibly remove Jews from their homes a year earlier during the disengagement from Gaza and northern Samaria — and were bitterly criticized for both moves by Binyamin Netanyahu, the current prime minister.

Netanyahu, needless to say, has been very anxious to avoid a repeat of those scenes during his administration, but residents have said they will not make it easy. In a statement, Amona residents said, “We will not bow to the will of the far left to destroy a flourishing settlement, to evict 200 children from their homes, and to call it ‘a good deal,’” as Prime Minister Binyamin Netanyahu and Jewish Home Chairman Naftali Bennett have termed the transfer of residents to the adjacent parcels of land. “True leadership is tested at the moment of truth, and for hundreds of thousands of people, Amona is the true test and symbol of the struggle for the Land of Israel. He who surrenders on Amona surrenders on Ofra, Beit El, Chevron, and the future of Jewish settlement in Yehudah and Shomron altogether.”

Police have already issued 200 orders to rightwing activists, forbidding their entry into the Amona area. Residents and activists said it was likely that the IDF would declare the area a closed military zone as early as Friday. The government is anxious to carry out the evacuation as soon as possible in order to prevent a mass gathering of opponents of the evacuation, as occurred in 2006. A major reason for the evacuation to take place over the weekend, residents said, was that declaring the area a closed military zone would wreak havoc with the lives of residents of Ofra, Shiloh, and the towns in the area of Amona, who would be unable to go to work if the evacuation was on a weekday.

Earlier Thursday, Zohar Dvir, deputy chief of the Israel Police, said that police were prepared for the evacuation. “We will be there because we need to be there, and we will do our work with sensitivity, but with determination as well,” he said at a graduation ceremony for a class of officers. “If more determination is necessary, then we will be more determined to carry out our mission.” Sources in the Israel Police said that Commander Roni Alschech has already approved a comprehensive program outlining the role of police in the evacuation.

Police have increased their patrols outside the home of High Court Chief Justice Miriam Naor, Channel Two reported Thursday. The extra protection comes after several protests were held outside Naor’s house in recent days by opponents of the Amona evacuation. Police stressed that no threats had been received against the life of Naor or anyone else, but that they preferred to err on the side of caution.