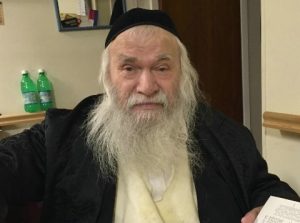 The Bobover kehillah is mourning the petirah of Reb Moshe Chanoch Grunfeld, z”l, who served as gabbai to three generations of Bobover Rebbes. Shortly after Harav Shlomo Halberstam, zy”a, assumed leadership of Bobov, he selected Reb Moshe Chanoch as one of his trusted assistants. For decades Reb Moshe Chanoch sat night after night writing kvitlach for the myriads of petitioners who came to seek advice and brachos from the tzaddik, continuing his role for the Rebbe’s son, Harav Naphtali Tzvi, zy”a, as well as for, ybl”c, the present Rebbe, shlita. He was 84 years old.

Reb Moshe Chanoch was born in Fuma, Italy, where his parents, Reb Shalom, Hy”d, and Sippa Leah, a”h, had fled from their native Galicia during the First World War. There, they became part of the kehillah of refugees who had settled there.

The family eventually relocated to Budapest, where he and his mother managed to survive the horrors of the Holocaust. Sadly, his father perished in a Nazi labor camp.

Shortly after Reb Moshe Chanoch’s arrival in America, he rekindled the family’s connection to the Bobover court and became a close attendant of the Rebbe.

For several years after the war he was part of a group known as Meorerei Yeshanim, which was involved in reprinting sefarim that were unavailable in America at the time. With a lifelong love of sifrei kodesh, his work in publishing sefarim continued for decades, making many old works more accessible and bringing important new pieces to the public.

Despite the demands of the sefarim store and his role as gabbai, Reb Moshe Chanoch spent the free time available to him engrossed in Torah, and was a talmid chacham of stature.

The Grunfeld home was renowned for its open doors and tremendous hachnasas orchim. Whether an indigent visitor on a fund-raising trip or a highly respected guest, they all received the same royal treatment from Reb Moshe Chanoch and, ybl”c, his wife.

The levayah was held on Tuesday afternoon at the Bobover beis medrash in Boro Park.

Reb Moshe Chanoch is survived by his wife, Mrs. Hindel Grunfeld; son, Reb Sholom Yosef; as well as by grandchildren and great-grandchildren.

This article appeared in print on page 34 of the December 7th, 2016 edition of Hamodia.