Stocks posted slight gains on Tuesday, sending the Dow Jones industrial average to another record, helped by shares of telecommunications companies such as Verizon, Sprint and AT&T.

Small companies and bank stocks also rose as investors continue to speculate that U.S. economic growth will pick up under the incoming Trump administration.

Telecommunications stocks were among the biggest gainers, helped by a myriad of company-specific news. Dow member Verizon climbed 61 cents, or 1 percent, to $50.36 and AT&T rose 72 cents, or 2 percent, to $39.35. Overall, the telecom sector of the S&P 500 rose 1.5 percent.

Separately, Sprint and T-Mobile gained after President-elect Donald Trump said that Japanese company Softbank, which owns the majority of Sprint, was going to invest $50 billion in the U.S. to create 50,000 jobs over the next four years. T-Mobile shares rose on speculation that it could be acquired in a deregulatory Trump White House, possibly by SoftBank.

Bank stocks also continued to perform well, as they have since the election. The financial services sector of the S&P 500 closed up 1 percent, far more than the broader market. The Russell 2000 index, which is made up of mostly smaller companies, rose 1.1 percent to a new record as well. 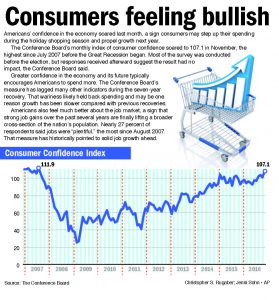 Boeing’s stock dropped briefly after President-elect Trump said he believed the U.S. government should cancel an anticipated order for new Air Force One planes, claiming the project is too expensive. The Air Force has not contracted out the new Air Force One planes, however Boeing does have a $170 million viability contract with the Air Force to determine the capabilities of the next version of Air Force One. Boeing had been down as much as 1 percent earlier in the day, only to close mostly unchanged at $152.24.

A rally in oil prices petered out after four days of gains driven by OPEC’s deal to cut production next year. Benchmark U.S. crude closed down 86 cents to $50.93 in New York. Brent crude, the international standard, shed $1.01 to $53.93 a barrel in London. While oil prices were solidly lower, energy companies were trading mostly flat to only slightly lower.

In other company-specific news, Chipotle Mexican Grill dropped $29.90, or 7.5 percent, to $366.37 after the company’s CEO said he was “nervous” about hitting full-year forecasts and that the company’s turnaround is going slower than expected. Chipotle has struggled since an E. coli outbreak last year.

In Europe, Italy’s stock market jumped 4.2 percent, a day after slipping in the wake of the failure of a constitutional referendum that forced the resignation of that country’s premier. France’s CAC 40 added 1.3 percent, Britain’s FTSE 100 was up 0.5 percent and Germany’s DAX rose 0.8 percent.