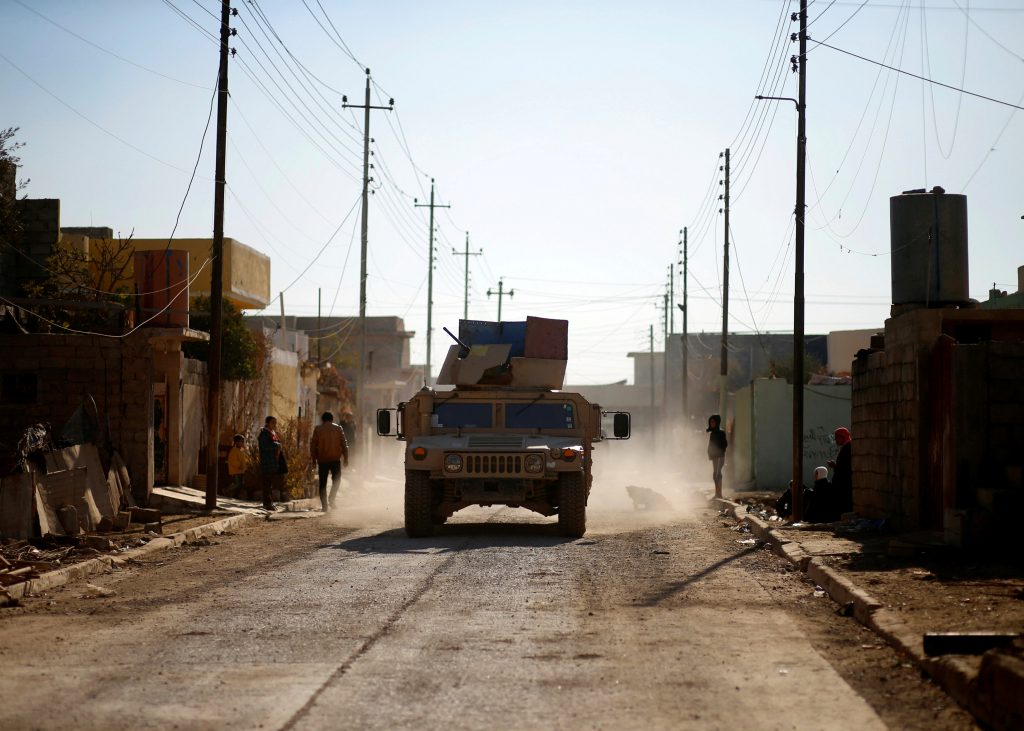 After weeks of static front lines in southeast Mosul, the Iraqi army rolled past barricades of dirt and rubble into a neighborhood held by the Islamic State terrorist group Tuesday. Iraqi military officials say their forces have advanced more than two kilometers and taken the hospital building in the al-Salam neighborhood, but by evening Iraqi forces had only secured a few hundred meters of advances and clashes were ongoing.

The push was launched just after 6 a.m. Tuesday morning with a heavy barrage of airstrikes that sent dark clouds of smoke into the sky over the modest residential neighborhood.

Coalition and Iraqi air support for the advance appeared heavier than previous operations inside southeastern Mosul. Coalition forces could be seen two-and-a-half miles from the front providing logistical support. Iraqi troops also reported that fewer IS car bombs attacked the convoy than in previous assaults. After one such car bomb attack, at least two military vehicles carrying the wounded could be seen speeding back from the front.

Thick plumes of smoke billowed from the site of the hospital building into the evening sky Tuesday after the commander of a joint operations center that oversees the Mosul campaign, Lt. Gen. Abdul-Amir Yarellah, pronounced the site retaken by the Army’s 9th Division in a statement.

“The hospital was a Daesh base,” said Iraqi army Lt. Ahmed Abu Fadl, using the Arabic acronym for IS. “They were treating their wounded there,” he added, explaining that he hoped retaking the building would hurt the terrorists’ ability to launch organized counterattacks.

Units from Iraq’s 9th Division slowly moved across the main road marking the front line in southeast Mosul in large heavily armored personnel carriers. As the convoy wound through narrow streets on Mosul’s edge, small children waved and shouted from the tops of garden walls. But as the soldiers pushed deeper into the city, only a handful of families peered out at them from garden gates. Inside one neighborhood declared liberated weeks ago, sniper rounds sent advancing troops ducking for cover.

From the rooftop of Fathii Muhammad Yousef’s two story house he pointed to a minaret where an IS sniper was perched, firing on the frontline below.

“Starting before dawn we heard more than 20 airstrikes,” said Yousef, who took cover from the clashes with his family of 10 in their home just a block from the front. For the past month Iraqi forces have clashed with IS fighters on the streets just outside Yousef’s home. Mortars and tank rounds have left the walls of his home scarred and his windows broken. Over the past month, four of his neighbors have been wounded by gunfire and shrapnel.

Yousef said he’s hoping Iraqi forces will manage to push past his neighborhood so his family will be able to regain access to food and clean water. Over the past week he ran out of water and is now running low on food. “All we have now is well water, it’s not clean enough to drink, but what else can we do?” he said, explaining the water is making some of his youngest children sick.

Iraqi forces, backed by the U.S.-led international coalition, launched a campaign in October to retake Mosul, the country’s second largest city and the last major IS urban bastion in Iraq. While Iraqi forces on the city’s eastern front have made some of the largest gains, fronts to the city’s south and southeast have barely moved for weeks, as Iraqi troops have struggled to mobilize adequate hold forces and reinforce their defensive lines.

In an audio recording published online, the newly-appointed spokesman of IS, Abu al-Hassan al-Muhajir, urged the fighters in Mosul and the Syrian city of Raqqa to keep up the fight and not to retreat. In his nearly 30-minute speech, al-Muhajir called on Muslims and “Caliphate soldiers” to strike inside Turkey and against its diplomatic missions as well as launching attacks in other parts of the world.

It was not clear when the recording was produced; it was distributed by the terrorist group’s al-Furqan media arm late Monday night. Al-Muhajir replaced Abu Mohammed al-Adnani, who was killed in an airstrike in August.

IS captured Mosul in the summer of 2014 as part of a blitz that placed nearly a third of Iraq under their control, along large swaths of neighboring Syria. Iraqi troops, federal police and allied Shiite and Sunni militias have over the past year pushed IS terrorists from most of the vast Sunni province of Anbar, west of Baghdad, and areas to the north and east of the Iraqi capital.