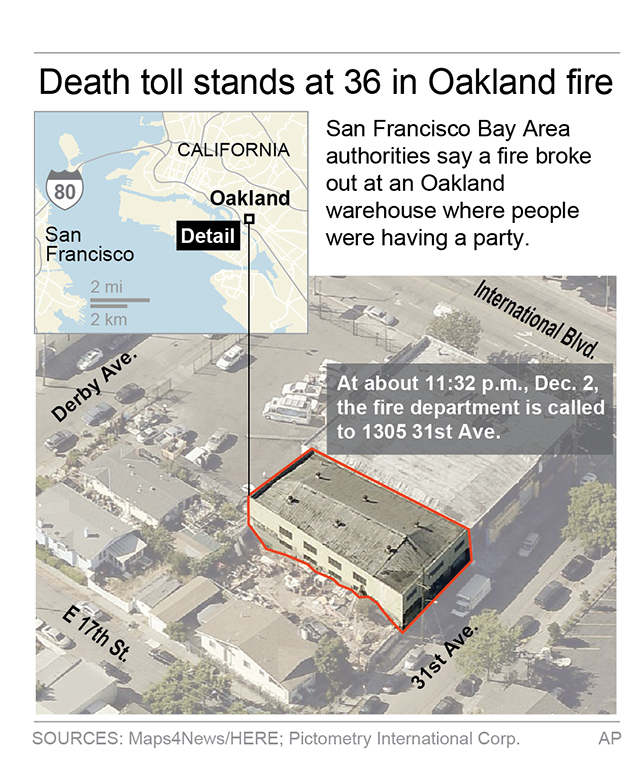 City and state officials fielded years of complaints about dangerous conditions, illegal substances, neglected children, trash, thefts and squabbles at the illegally converted warehouse where 36 people were killed in a weekend fire, with inspectors knocking on the door as recently as two weeks before the blaze.

With all the attention from police, child welfare authorities, building inspectors and others, some of those who saw what was going on at the underground artists’ colony say they figured time and again that authorities would shut it all down.

But they never did.

“It makes me so sad that all this has been there this whole long time,” said neighbor Phyllis Waukazoo. “This was an accident waiting to happen that could have been prevented.”

Mayor Libby Schaaf deflected questions about whether more aggressive action by authorities could have prevented the tragedy at the cluttered, ramshackle building known as the Ghost Ship.

The cause of the fire is still under investigation, and prosecutors said they are looking into the possibility of criminal charges.

On Tuesday, sheriff’s Deputy Tya Modeste said the families of 26 of the victims had been notified. She said that an additional nine bodies have been tentatively identified and that officials have been unable to identify one victim.

Record searches and interviews by The Associated Press indicate that the couple who leased the warehouse and turned it into living spaces and artists’ studios, Derick Ion Almena and Micah Allison, were already under scrutiny by several agencies.

Some of those agencies had been told or could have seen for themselves that the family of five and their dozens of artist tenants were living in a warehouse that had no permit to operate as a living space and allegedly had no proper kitchen, electricity, adequate fire exits or solid stairs.

Almena, 46, is on probation for receiving stolen property, an Airstream trailer he was accused of stealing and stashing at the warehouse. The terms of his probation allowed authorities to enter his home without a warrant, records show.

Child welfare workers had taken away the couple’s three children in mid-2015 but returned them by this past summer, despite the illegal conditions at the warehouse and the children being hungry, infested with lice and frequently truant, Micah Allison’s father and other acquaintances said.

In returning the children, the authorities set certain conditions, including that the youngsters be out of the warehouse during the many events held there, according to those who knew the couple.

On the night of the fire, Allison and the three children had checked into an Oakland hotel, according to Almena. All of them survived.

Most recently, Oakland city inspectors received complaints on Nov. 13 about the warehouse being remodeled into residences and on Nov. 14 about an “illegal interior building structure,” city records showed Tuesday.

City officials sent a violation notice for the first complaint and opened an investigation for the second one.

Darin Ranelletti, interim city building chief, told reporters an inspector went to the location on Nov. 17 to follow up on the complaint. But the inspector was unable to enter the building or talk to occupants, and left, Ranelletti said. City officials would not give further details.

Under state and city law, commercial buildings must receive annual fire inspections. Sheriff’s Sgt. Ray Kelly refused to say whether fire officials had visited the warehouse before the blaze.

Zac Unger, vice president of the Oakland firefighters union, said the city has about one-third of the fire inspectors of other cities of comparable size.

“It’s a systematic underinvestment in the fire department and a roll of the dice, hoping they’ll get away with it,” he said.