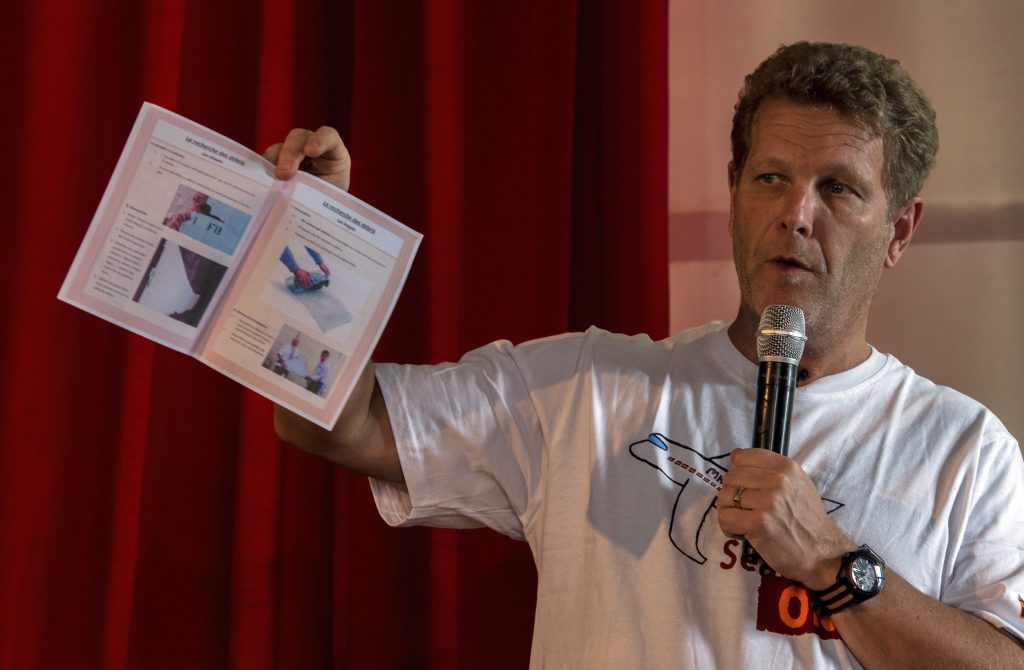 Anyone who finds a piece of debris from a Malaysia Airlines plane that is believed to have crashed in the southern Indian Ocean in 2014 could receive a financial reward, relatives of those who were on the plane said Monday in Madagascar.

A group of relatives who traveled to the island nation off the southeast coast of Africa made the offer in hopes that residents will scour some coastal areas of Madagascar, where possible parts of Flight MH370 washed ashore.

Meanwhile, a Malaysian official investigating the disappearance of the Boeing 777 was in Madagascar’s capital, Antananarivo, to pick up debris that has already been found and will be analyzed to see if it came from the aircraft.

“The more debris we find, the easier it will be to find where the crash happened,” said Ghislain Wattrelos, a Frenchman who lost his wife and two of his three children when the plane deviated from its flight path from Malaysia to Beijing and vanished on March 8, 2014.

Malaysia, Australia and China are close to completing a deep-sea sonar search, so far unsuccessful, of 46,000 square miles off Australia’s southwest coast in the Indian Ocean. They say they will suspend operations if there is no new evidence that could help pinpoint the crash site. Relatives of the missing believe the search should continue.

Wattrelos, as well as two people who lost their mothers on the flight — Grace Nathan of Malaysia and Jiang Hui of China — spoke at a news conference in Antananarivo. They did not specify how much money might be given to someone who finds a confirmed piece of Flight MH370, saying it depends on the significance of the debris and the limited resources of the families.

“Everything is funded by us,” said Wattrelos, a business executive.

That includes the cost of flights, accommodation and other expenses that the relatives are spending on a weeklong trip to Madagascar, which will include travel to coastal areas where plane debris may have washed up after drifting across the ocean.

There, they plan to hand out leaflets asking people to look for possible plane parts, described as often gray, with an interior, honeycomb design. Anyone who finds an item should note the time and place of discovery, take photographs and wrap the item in plastic and hand it to the nearest airport or police station, according to the leaflets.

The families say there are three major areas in Madagascar where Flight MH370 debris could have washed up: Isle Sainte-Marie, Antongil Bay and Nosy Be, a big tourist destination. They also want people in Tanzania and Mozambique to be on the lookout. A piece found in Tanzania has been confirmed as part of the plane, while a couple of pieces found in Mozambique have been described as almost certainly coming from the plane.

Confirmation that the plane crashed came last year when a wing part washed ashore on Reunion Island in the western Indian Ocean, east of Madagascar.

Nathan, the Malaysian who lost her mother, said families asked officials in vain for months to launch a search for debris around Africa, and finally decided to look themselves. She speculated that their trip to Madagascar may have pushed Malaysian investigators to also travel there to pick up debris this week.

“Our initiative to come here has somehow put some pressure on them,” Nathan said. “At least one good thing has already come out of our journey.”