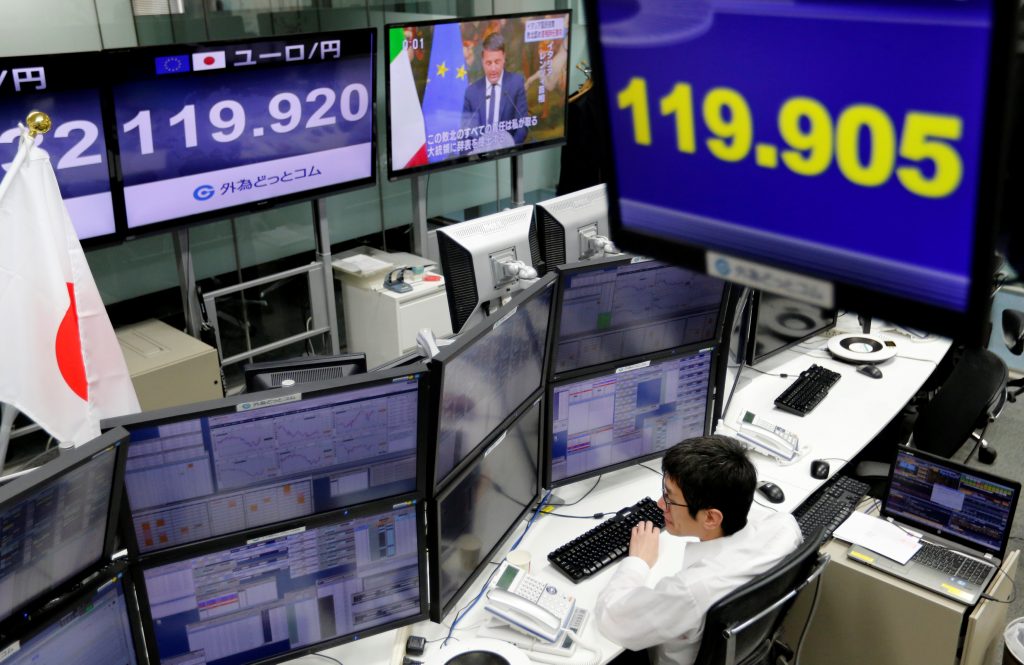 The euro fell to a 20-month low on Monday and investors fled riskier assets after Italian Prime Minister Matteo Renzi said he would resign following a stinging defeat on constitutional reform that could destabilize the country’s shaky banking system.

European stock markets are also set for a weak start, with Italy underperforming as investors brace for turbulence and political crisis in the euro zone’s heavily indebted third-largest economy.

Financial spreadbetter IG Markets expects the EuroSTOXX 50 to open down 0.6 percent, and Germany’s DAX and Britain’s FTSE to start the day 0.4 percent lower.

Renzi’s failure deals a body blow to a EU already reeling under antiestablishment anger that led to the shock exit of the U.K. from the club in June.

“For Italy, establishing stable governance and a plan to guide the nation is of critical importance given the fragility of the economy, challenging policies and the liquidity problems in the banking system.”

The drop to its session low was the sharpest since June and opened the way to a retest of the March 2015 trough around $1.0457.

Analysts at RBCCM argued that, based on what happened in 2012 at the height of the Greek crisis, the risk of a euro-zone crisis could see the euro trade as low as $0.8000.

“It may sound extreme, but if a second euro-zone crisis were to hit, with the U.S. dollar at a much stronger starting point, EUR/USD could arguably trade lower still,” they wrote.

The dollar was supported by expectations of a U.S. rate increase this month and more to come next year. The dollar index, which tracks the greenback against a basket of six global peers, jumped 0.6 percent to 101.37.

MSCI’s broadest index of Asia-Pacific shares outside Japan eased 0.6 percent, while E-mini futures for the S&P 500 narrowed losses to 0.3 percent.

Even as the long-awaited opening of a scheme to connect the Shenzhen and Hong Kong stock markets went live on Monday, China’s blue-chip index slumped the most in six months after the nation’s top securities regulator warned against “barbaric” share acquisitions, although small caps remained firm.

The link between China’s booming Shenzhen stock market and neighboring Hong Kong allows foreign investors access for the first time to some of the fastest-growing technology companies in the world’s second-biggest economy.

Back in Europe, dealers said Italian bonds were set to come under pressure as top-rated U.S. Treasuries and German bonds gained.

Investors and European politicians fear the ‘No’ camp’s victory in Italy could cause political instability and renewed turmoil for the nation’s banking sector, which has been hit by concerns over its huge exposure to bad loans built up during years of economic downturn.

“Forming a stable government in Italy may be difficult, the resuscitation of [ailing lender] Monte Dei Pashci may be impacted, there is some potential that this may create an opening for a secessionist political party,” said Angus Gluskie, managing director of White Funds Management in Sydney.

The prime minister’s resignation represents a fresh blow to the European Union, which is struggling to overcome a raft of crises, and was eager for Renzi to continue his reform push.

Markets had earlier taken some encouragement when Austria’s far-right presidential candidate was soundly defeated by a pro-European contender, confounding forecasts of a tight election.

The European Central Bank meets Thursday amid much speculation that it will announce a six-month extension of its asset buying program and widen the type of bonds it can purchase.

“There has been some speculation that the ECB would step and front load purchases of Italian bonds if markets became unsettled by a ‘No’ result, so perhaps it is the thoughts of a central bank liquidity sugar pill driving things again,” said ANZ economist Jo Masters.

In the last trading session before the referendum, the Italian benchmark posted a 0.2 percent decline.

The pan-European STOXX 50 closed down 0.4 percent.

While the U.S. November payroll report on Friday was firm enough to cement expectations of a rate hike by the Federal Reserve this month, a surprise pullback in wages helped bonds pare a little of their recent losses.

In commodity markets, oil ran into risk aversion and some profit-taking after recording its best week in at least five years following OPEC’s decision to cut crude output.

Markets are now focused on the implementation and impact of OPEC’s first output cuts since 2008, to be joined by Russia and possibly other non-OPEC producers.