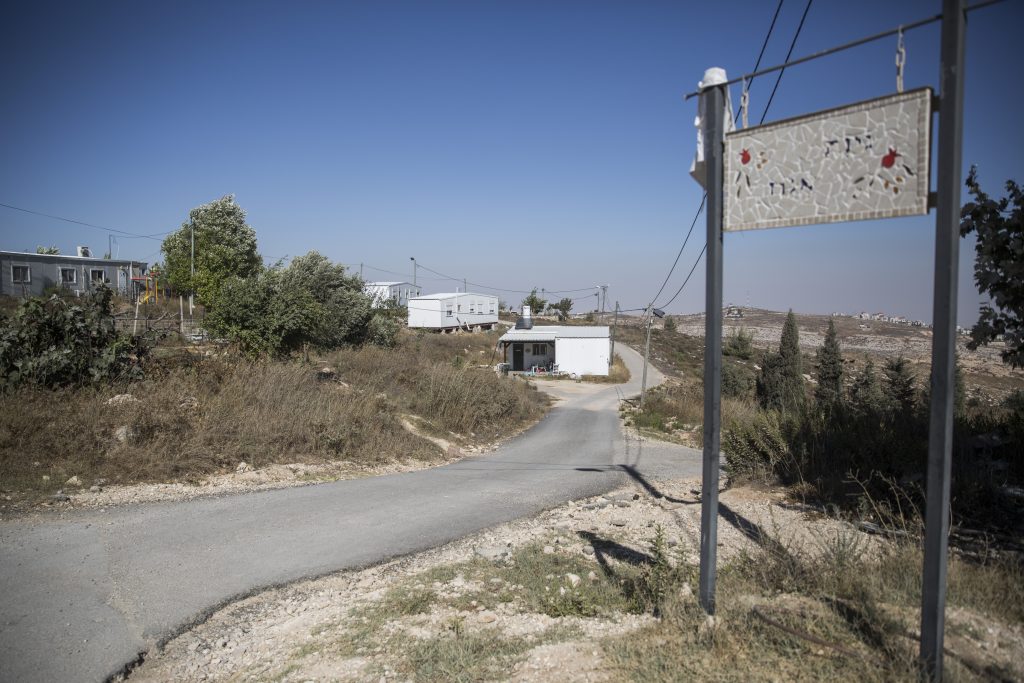 Residents and supporters of Amona said Monday that they will not go quietly, despite the “understandings” between Prime Minister Binyamin Netanyahu and Jewish Home leader Naftali Bennett. After talks Sunday night, sources close to the talks said that Netanyahu had agreed to support a version of the Settlement Arrangements Law that would provide a legal solution for Jewish homeowners who live on land claimed by Arabs – but would not provide that solution for Amona.

Instead, the residents of Amona would move from their current homes to a parcel of land adjacent to where they now live under the Absentee Property Law, in which the government takes over administration of parcels of land whose owners are not interested in or capable of taking legal action to prevent use of their assets. The residents would live there for several months, until new homes in a neighborhood of Shilo are ready for them.

To prepare for the move, Netanyahu said Sunday night that he would ask the High Court to postpone the demolition of the Amona homes for 30 days. Speaking Monday, Likud MK David Bitan said that he believed the court would agree to this, despite the denial of previous requests for postponements. “Now we are coming with a solution, so there is no reason for them not to approve this postponement,” he told Army Radio.

But it did not appear that the plan would go as smoothly as Netanyahu and Bennett hoped. Angry residents said Monday that they would not cooperate. “The public is not stupid,” the Amona Residents Committee said in a statement. “We will not bow to the will of the far left to destroy a flourishing settlement, to evict 200 children from their homes, and to call it ‘a good deal,’” as Netanyahu and Bennett have termed it. “True leadership is tested at the moment of truth, and for hundreds of thousands of people Amona is the true test and symbol of the struggle for the Land of Israel. He who surrenders on Amona surrenders on Ofra, Beit El, Chevron and the future of Jewish settlement in Yehudah and Shomron altogether.

“Those who shake in fear from false political threats will be unable to stand strong in the face of true threats,” the statement said, in a clear reference to their disappointment in Bennett, who had previously said that he would take the fight for Amona all the way to new elections, if needed. “We reiterate: The destruction of Amona will not take place peacefully. Those responsible for this will bear that responsibility in the future. Thousands will come to defend our homes.”

Homes in Amona are set to be demolished in three weeks, by order of the High Court, which has accepted claims by Arabs that they own the land on which the homes stand. Incited by left-wing Israeli groups, the Arabs have refused all offers of compensation in order to allow the residents to remain. In response, Jewish Home and Likud MKs have authored the Settlement Arrangements Law, which would replace the process where such claims are adjudicated by the High Court with a special arbitration process that would, among other things, advocate land swaps that would replace the land claimed by Palestinians with state land of an equal or greater value that is not in dispute. The law is designed to prevent the demolition of homes at outposts and settlements that were built in good faith, but later were discovered to be built on private land.

While that aspect of the law has wide support in the coalition, one section of it – the section that relates to Amona – is in dispute, with Finance Minister Moshe Kachlon and other Kulanu MKs opposing it. That section seeks to grandfather the law, effectively outmaneuvering the High Court’s order to demolish the homes in dispute at Amona – and Kachlon has said that he will not support a law that seeks to uproot a High Court decision. For that reason, the coalition had been set in a rare move to present two versions of the bill, one with the grandfather clause, and another without – thus ensuring passage of at least one version.

The vote on those bills has been postponed three times, as Netanyahu sought to avoid a showdown between Jewish Home, Kulanu, and the High Court. After Sunday’s talks, sources close to Netanyahu said that the government would now support the “non-Amona” version of the law – which will institute the arbitration process in future claims by Arabs of land on which homes are built, but will not help Amona.

Speaking on Army Radio Monday, Justice Minister Ayelet Shaked admitted that Amona was to be the “sacrificial lamb” which, in its destruction, had ensured a bright future for Jewish settlement in Yehudah and Shomron. “This is a historic law. The residents of Amona are paying a heavy price, but it will not be for naught. The price they pay will allow us to ensure the arrangement of other communities in Yehudah and Shomron.” She urged residents to leave their homes peacefully and accept the arrangements agreed upon by Netanyahu and Bennett.

Right-wing attorney Itamar Ben Gvir took exception to Shaked’s position. “Bennett should have demanded that the Arrangements Law include Amona. This is the moral and just thing to do.” Amona residents, he said, “must resist. Amona should have been the test that either caused the government to fall, or to survive for many years to come. Amona is a symbol, not just buildings, but people and a symbol of Jewish bravery and resistance.”

On Sunday, police said they arrested several youths who had distributed leaflets at the Tapuach Junction calling for a mass march on Amona, and for IDF troops and police to refuse orders to evacuate Amona. The Amona saga goes back to 2006, when the High Court ruled that the outpost located in the Binyamin region was built on land claimed by Palestinian families. In February of that year, police and officials of the Civil Administration evacuated and razed nine buildings, facing down 4,000 Israeli protesters in a traumatic operation that saw dozens of people, including three MKs, injured. Netanyahu has been very anxious to avoid a repeat of those scenes during his administration.