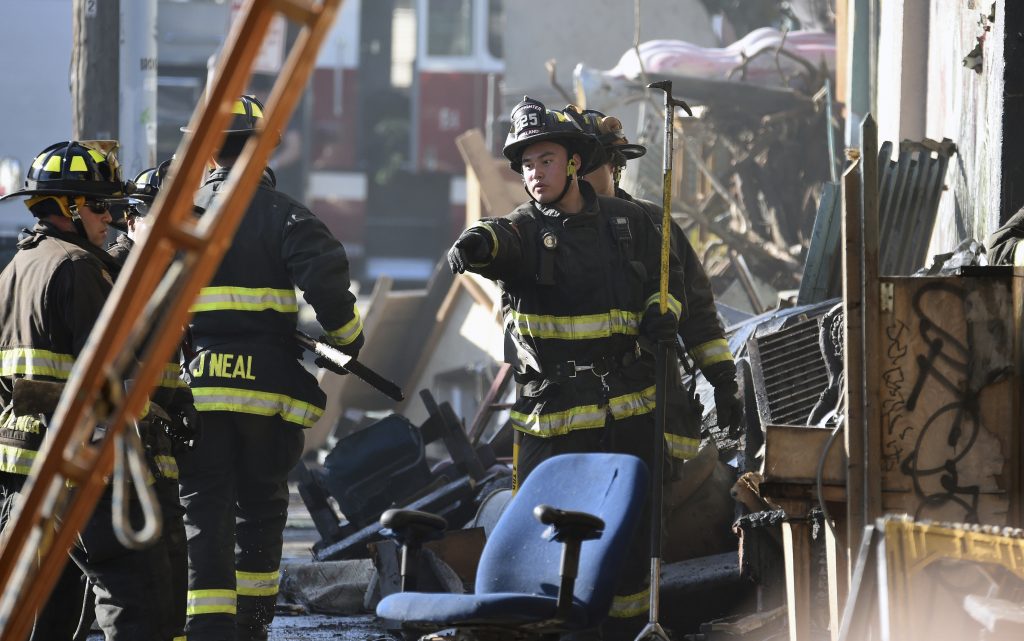 The death toll in a late-night party fire at a converted Oakland warehouse rose to 30 on Sunday, as firefighters dug slowly through the charred remnants of the building in their search for what they expect will be more victims.

Kelly says crews are starting to get deeper into the building and that as they advance they expect to find more victims.

Authorities also say DNA will be needed to identify bodies. Officials have asked families of those feared dead to preserve any DNA evidence they may have, including hair or tooth brushes.

“This will be a long and arduous process, but we want to make sure we are respecting the victims and their families and firefighter safety,” Dayton said, adding that the process is “heartbreaking.”

Alameda County Sheriff’s Sgt. Ray Kelly said Sunday only about 20 percent of the building has been searched. Kelly said officials have notified the families of three of the dead.

The search for bodies is expected to continue at least 48 hours.

Fire ripped through the cluttered structure Friday in the building known as the “Ghost Ship.” The site was an artist workspace that doubled as an illegal dwelling for a rotating cast of a dozen or more residents, those who lived there or visited often said.

Former residents said it was also a death trap with few exits, a rickety makeshift staircase, piles of driftwood and a labyrinth of electrical cords. The ground floor had five recreational vehicles and other nooks used as living spaces that were rented out to tenants, while the upstairs had space for concerts like the deadly party that drew up to 100 people Friday night. The water and electricity were stolen from neighbors and often didn’t work.

“If you were not familiar with the building and the way that it was, if you were going there for a party, you wouldn’t be aware of the maze that you have to go through to get out,” said Danielle Boudreaux, a former friend of the couple who ran the warehouse.

Boudreaux identified the operators of the collective as Derick Ion Almena and Micah Allison. She said she had a falling-out with Almena when she persuaded Allison’s parents and sister about a year ago that the warehouse was a dangerous place for the couple’s three children to live.

The couple charged tenants enough to cover the warehouse rent and used proceeds from parties to pay their own living expenses, Boudreaux said.

On Saturday, the artist retreat had turned into a scene of horrors, the 4,000-square-foot structure to rubble. The building’s roof had collapsed into the second floor, which in places fell to the bottom floor. Firefighters had to temporarily stop their search and rescue operations Saturday when they became too dangerous, taking time to shore up the structure, Oakland deputy fire chief Mark Hoffmann said.

Oakland officials said they had opened an investigation just last month into the warehouse after repeated complaints from neighbors who said trash was piling up and people were illegally living in the building, which was zoned as a warehouse.

Darin Ranelletti, of the Oakland Planning Department, said the city opened an investigation Nov. 13 and an investigator went to the premises on Nov. 17 but could not get inside. The city has not confirmed people were living inside.

Shelley Mack said she lived there about two years ago, staying four or five months. She said she wasn’t told the residence was illegal until after she moved in, when she was instructed to tell visitors it was a 24-hour workspace for artists.

When outsiders or inspectors planned to visit, residents would scurry to hide clothes and bedding, Mack said.

“It’s like a horror house. Just horrors in there,” she said, referring to things such as no electricity, running water and freezing temperatures.

Alastair Boone, 22, a University of California, Berkeley student, arrived at the party with five friends around 11 p.m. and had just received a tour of the property and stepped outside before the fire broke out.

“In a couple of minutes there were flames coming out of the windows and black smoke was just billowing out of the house,” she said.

A man identified as Derick Ion posted a message on social media early Saturday, saying “Everything I worked so hard for is gone. Blessed that my children and Micah were at a hotel safe and sound.” He drew rebukes online from others who said he was warned the building was unsafe.

Almena did not immediately respond to emails sent to addresses affiliated with him. Phone numbers either rang continually or were disconnected. Authorities declined to talk about the manager when asked by reporters Saturday, saying they were focused on recovering the bodies and consoling the families.

Online records listed the building’s owner as Nar Siu Chor. The Associated Press could not locate a telephone number for her Saturday and efforts to reach her at other Oakland addresses associated with her were not successful.

A website for the warehouse showed pictures of a Bohemian, loft-like interior made of wood and cluttered with rugs, old sofas and a garage sale-like collection of pianos, paintings, turntables, statues and other items. Advertisements touted various electronic music parties.

It’s unclear what sparked the fire, but officials said the clutter served as a tinderbox and there were no sprinklers inside.

Monica Kat, a paralegal, feared four of her friends were dead.

“We were all checking in looking for them and they’re still not accounted for and I can only think the worst at this point,” she said.