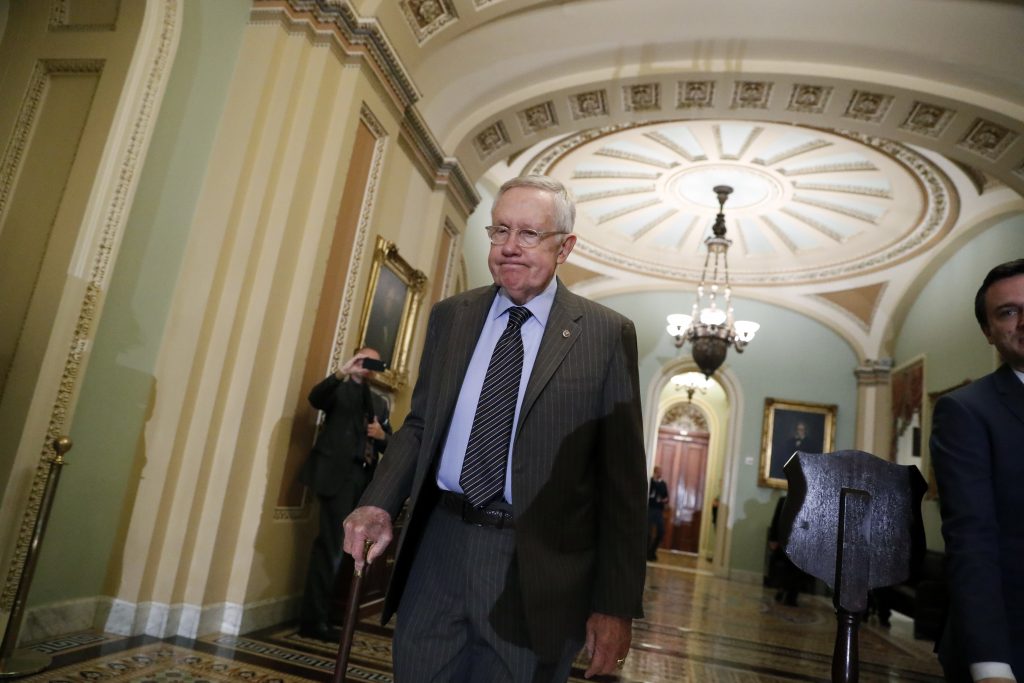 Hillary Clinton and Vice President Joe Biden will headline a star-studded send-off for Senate Minority Leader Harry M. Reid on Thursday as the Nevada Democrat ends his historic 30-year run in the chamber.

With Congress aiming to end the legislative session this week, Reid’s last big day in office will conclude at a gala in the Kennedy Caucus Room at the Russell Senate Office Building, according to senior advisers. Behind the scenes, Reid is dispensing parting wisdom to his caucus, with his most senior political adviser giving an address to Democrats about how Reid delivered Nevada for Clinton and won every key congressional race.

The tribute will include speeches from Clinton and Biden as well as two senators who have figured prominently in Reid’s 12 years as Democratic leader: Majority Leader Mitch McConnell, R-Ky., Reid’s longtime sparring partner in one of the Capitol’s most legendary up-and-down relationships, and Charles E. Schumer, the Jewish Democrat from Brooklyn with a larger-than-life personality who became best friends with the soft-spoken Mormon from the tiny mining town of Searchlight, Nevada.

The event will also include the unveiling of Reid’s portrait, which will hang in the Capitol corridors near the Senate chamber. It’s an unusually quick turnaround for a portrait unveiling, something that usually takes place several years after a leader retires.

Earlier Thursday, Reid will deliver his final floor speech, one of the most anticipated farewell addresses in some time. Tied for third-longest-serving Senate leader, Reid has been very successful and very controversial.

His work with House Minority Leader Nancy Pelosi, D-Calif., who was speaker for four of Reid’s years as majority leader, delivered and then protected key portions of President Barack Obama’s agenda. Pelosi will also speak at Reid’s party next week.

Yet Reid’s means in achieving some of his goals often infuriated the other side. When Reid prepared to end filibusters on most presidential appointments, McConnell delivered a scathing critique, concluding by saying history might remember Reid as “the worst leader here ever.”

His penchant for delivering insults made his daily speeches must-watch events. In the months leading up to Clinton’s presidential race against Donald Trump, Reid called Trump a “racist” who was an overweight “spoiled brat” with a terrible business track record. In the aftermath of Trump’s victory, Reid has ratcheted up his rhetoric toward the president-elect.

Those speeches infuriated Republicans, and it will be interesting to see how many Republicans attend his farewell speech and the party later Thursday.

In private, Reid is using his last days to try to provide a guidepost for Democrats to turn around their fortunes.

In a closed-door huddle Thursday, Senate Democrats heard from Rebecca Lambe, Reid’s longtime senior political adviser based in Las Vegas. Unlike so many other states on Election Day, Nevada went big for Democrats.

Clinton won the key swing state in part because of a large turnout by Hispanic voters, and Catherine Cortez Masto (D) won the highly contested race to succeed Reid. In addition, House Democrats picked up two seats previously held by Republicans — while across the other 49 states Democrats netted just four additional House seats.

Democratic aides described the room as “rapt” when Lambe went through the long history of how she built the Nevada Democratic Party into what is now simply called “the Harry Reid machine.”

Senators, situated at small tables throughout the Lyndon B. Johnson Room just off the chamber floor, turned their chairs around to listen to Lambe’s story. That courtesy is not always afforded to outside speakers at the regular Thursday luncheon.

“Look, there’s no secret sauce,” Lambe told the caucus, according to one attendee.

She focused Democrats on building up their respective state party organizations, by raising money for state committees and working with them to continually register voters. When Reid became Democratic leader, after Nevada delivered its votes to George W. Bush in the 2004 elections, Republicans held a slight voter-registration edge over Democrats in the state.

By the time the 2008 primary season ended, Nevada Democrats held an edge of roughly 100,000 voters over Republicans — and by the end of the 2016 season, Democrats had re-established a similar margin.

In 2018, 25 Senate Democrats are up for re-election to just eight Republicans, and 10 of those Democrats come from states that Trump just won — including a handful in deep-red states that gave Trump a margin ranging from 19 percent to 42 percent. Those senators paid the closest attention to Lambe’s presentation and asked the most questions, aides said.

She encouraged Democrats to never overlook even small pockets of votes. During the 2016 race, Cortez Masto was languishing, particularly among Nevada’s growing Asian and Pacific Islander populations. The campaign oversaw a deep dive into that community, discovered that women’s issues were of particular concern, and then tailored messages specifically on those issues to that community — and helped turn out a big margin.

His last days in the Senate are likely to mark the end of Reid’s prominent time in Washington. He has no plans to become a lobbyist, nor will he open a political center attached to a university. He’s attended just one state dinner and one White House picnic (only as favors to children) in 30 years in the Senate and four years in the House.

“I don’t do social stuff,” he said in a mid-October interview.

That will change, for just one day, this week.