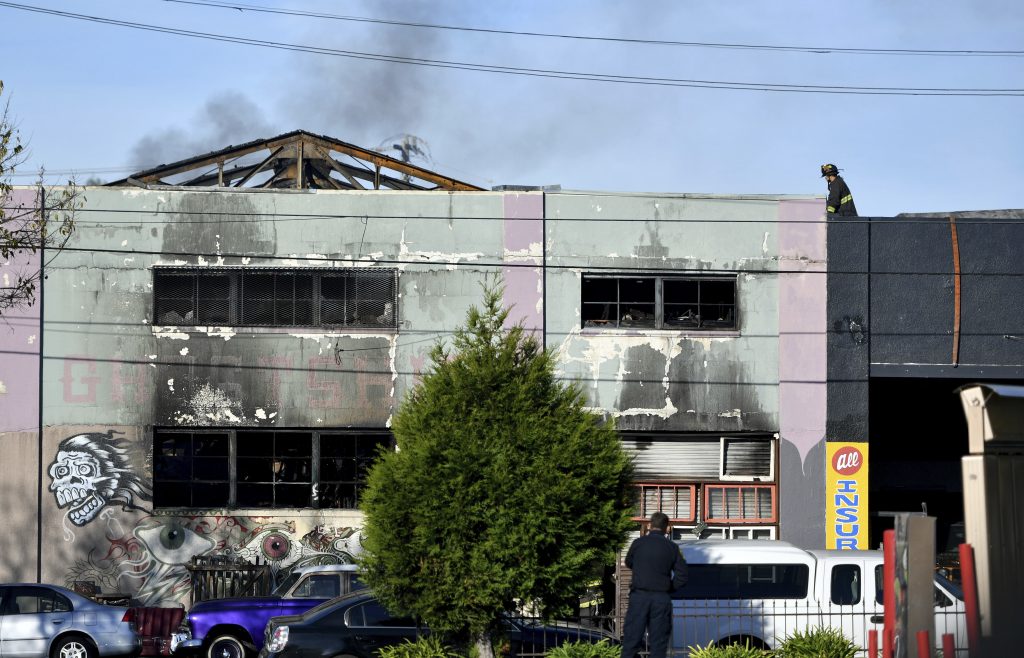 Fire tore through an Oakland warehouse converted into artist studios during an event Friday night, killing at least nine people, and officials said Saturday that the death toll could rise as high as 40.

Officials said people either escaped from the cluttered building or died inside, where the only way down from the second story was via a stairwell constructed entirely of wooden pallets.

“It appears that either you got out or you got trapped inside,” said Alameda County Sheriff’s Office spokesman Sgt. Ray Kelly.

Firefighters used chain saws and axes Saturday to cut through the debris of the cluttered building in a gritty neighborhood of the San Francisco Bay Area city, where the fire broke out about 11:30 p.m. Friday.

Oakland fire chief Teresa Deloche-Reed said at least another 25 people were unaccounted for in what authorities were calling the most deadly building fire in the city in recent memory. The victims were believed to be young people in their 20s, Kelly said. He said as many as 40 may have perished and that the coroner is preparing for a “mass casualty event” that could include victims from other countries.

It was not immediately clear what started the fire, but there did not appear to be sprinklers in the building, Deloche-Reed said. She said 50 to 100 people were believed to have been at the party when the fire started and that clutter “made it difficult for people to escape.”

“There is still a large portion of the building that still needs to be searched,” she said. “There is large timber and debris that will need to be removed and it’s going to have to be removed in a slow and methodical way.”

The fire caused the building’s roof to collapse and investigators were having trouble entering parts of the warehouse to search for any remaining bodies because the structure was deemed unsafe, Deloche-Reed said.