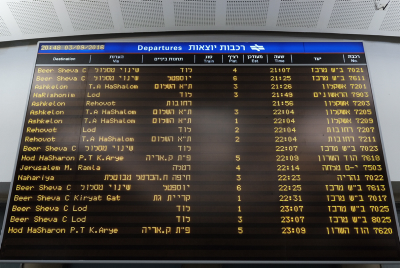 One hundred thousand Israeli residents of western Shomron could soon find their commute to Tel Aviv cut in half, as Transport Minister Yisrael Katz gave the go-ahead for in-depth planning of a new rail line between Lod and Hadera, part of which will cross the green line and serve residents of western Shomron who live near the green line such as Alfei Menashe, Elkana and Beit Aryeh, as well as others who live within a 10-15 minute drive from those towns.

The government has long considered building a train station to serve these residents, but has hesitated due to the political implications. This week, however, Katz gave the go-ahead for planning and for the acquisition of permits, etc. Construction on the line could begin at the end of 2018, with the entire project, which will spread from Lod in the south to near Afula in the north costing NIS 4 billion.

Katz also recently approved an expansion of the Jerusalem Light Rail to Maale Adumim, Givat Ze’ev and Adam, all located outside the 1948 armistice lines, in areas liberated by Israel in the 1967 Six Day War. There is also a master plan to expand Israel Railways service beyond Yerushalayim, to Maale Adumim and Gush Etzion.

Commenting on the new developments, Katz said that “we are connecting all of Israel via trains, and we are happy that the Shomron will be part of this.” Residents of Shomron, along with those of the suburbs of Yerushalayim, “are daily stuck in enormous traffic jams. They deserve to receive transportation services like everyone else. We obviously do not accept the argument that the artificial ‘green line’ should be a border over which public transportation never venture.”