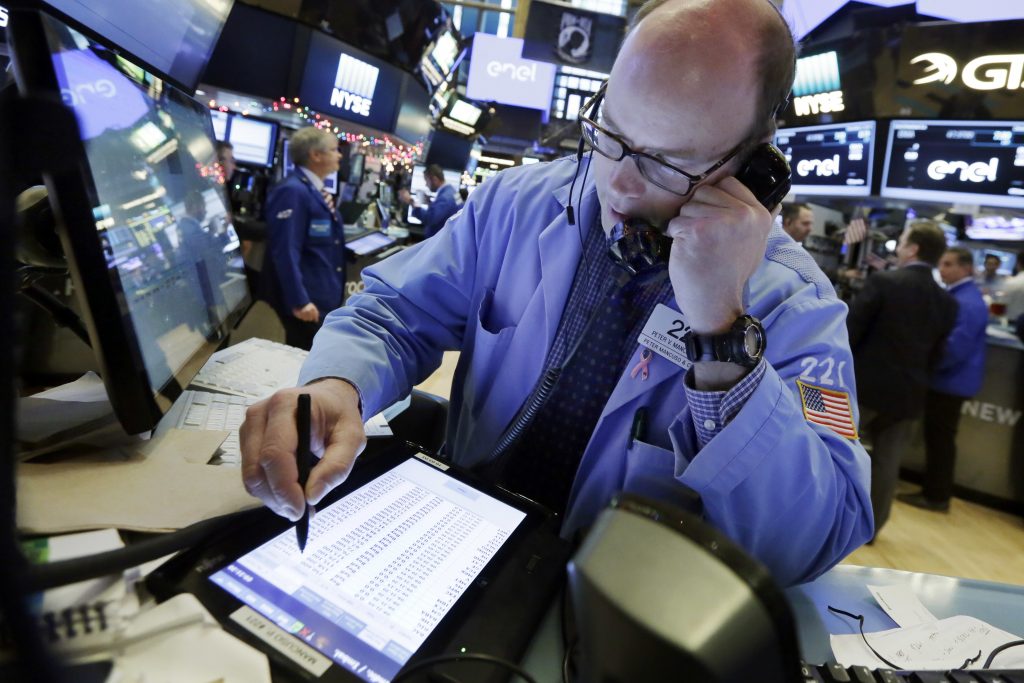 Stocks are mostly higher Friday thanks to gains for companies that pay large dividends. Real-estate and phone companies are rising. Banks are slipping after a huge rally over the last few weeks. Bond prices rose after a string of steep declines, sending yields lower. The Dow Jones Industrial Average, which closed at a record high a day ago, is down slightly.

US JOBS DATA: U.S. employers added 178,000 jobs in November, as hiring remained steady. However, fewer people looked for work and hourly wages slipped. The results cemented market expectations that the Federal Reserve will raise interest rates later this month. A very weak jobs report would have been the last thing that might have stopped the Fed from raising rates.

BONDS: Bond prices, which have been falling sharply since the presidential election, rose in early trading. The yield on the 10-year Treasury note fell to 2.38 percent from 2.45 percent. That helped utility and real-estate companies, which are often compared to bonds because of their big dividend payments. When bond yields fall, those stocks become more appealing to investors seeking income. Public Storage rose $4.22, or 2 percent, to $212.08, and Exelon rose $1.09, or 3.4 percent, to $33.26.

BOWING OUT: Starbucks shares slid $1.50, or 2.6 percent, to $57.01 after the company said Howard Schultz will step down as CEO in April. He will remain chairman of the company, and Starbucks said he will focus on new ideas like high-end shops. President and Chief Operating Officer Kevin Johnson will become CEO. Schultz gave up the CEO title in 2000, and investors feel Starbucks struggled until he become CEO again in 2008.

MISFIRE: Firearms maker Smith & Wesson gave up $2.27, or 9.4 percent, to $21.72 after its quarterly guidance disappointed investors.

ENERGY: Benchmark U.S. crude added 33 cents to $51.39 a barrel in New York. Brent crude, the standard for pricing international oils, picked up 29 cents to $54.23 a barrel in London. Oil prices jumped 13 percent over the last two days after OPEC countries agreed to trim their production of the fuel.