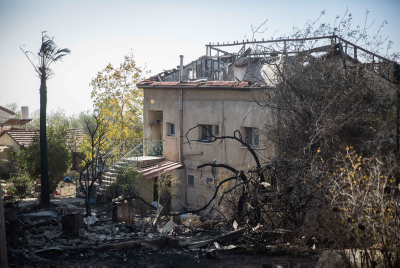 Thursday’s major rainstorms were not sufficient to remove all marks of last week’s wave of wildfires – and for residents of Beit Meir in the Yerushalayim Hills, the rain has not helped them. Residents were forced to brave the cold and wet weather Thursday to seek shelter elsewhere after they were ordered to leave their homes for the second time in a week – after safety officials detected extremely high levels of asbestos in the air.

Asbestos has been proven to be a factor in the development of cancer, and burned asbestos leaves particles floating in the air, which can be breathed in by victims – causing a potentially fatal situation. Rather than take a chance, health officials have evacuated the entire village, hoping to clean up the mess and reduce asbestos contamination back to a reasonable level.

Irate residents complained to Israel Radio that they were shocked that they had been permitted to return to their homes at all. At the time of the fires in Beit Meir, officials said that they were concerned over structures that had burned down that contained asbestos. As the problem was known even then, the residents said that the government had put their health in jeopardy by allowing them to return at all. The Environment Ministry did not comment on the story.