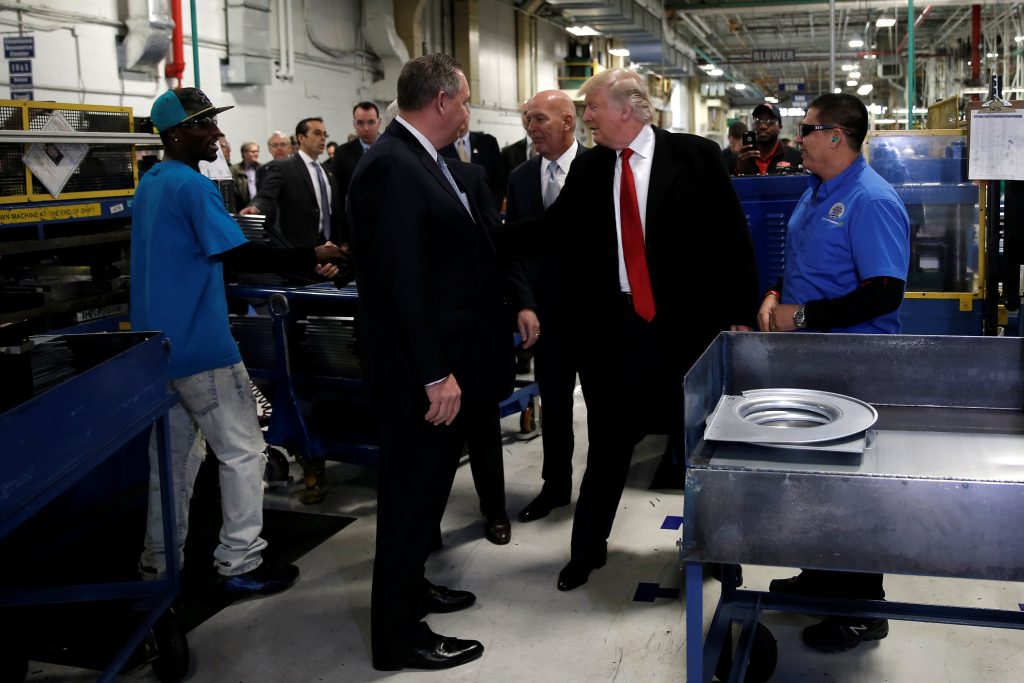 President-elect Donald Trump arrived at a Carrier plant here Thursday afternoon, celebrating his role in keeping up to 1,000 manufacturing jobs in the United States before mobilizing supporters at one of his signature campaign-style rallies.

Trump walked the floor of the air-conditioning and heating systems maker, giving a thumbs up to employees, some of whom snapped pictures of the president-elect with their cellphones.

He came here to trumpet a deal under which Carrier will not move the jobs from Indiana to Mexico. The Indiana-based manufacturing company had announced plans to transfer 1,400 positions to Mexico, but reversed course after Trump and Vice President-elect Mike Pence intervened.

The company said it would receive a $7 million package of state incentives to keep the factory here. The company said the package would extend over several years and was contingent on employment, job retention and capital investment.

When asked by reporters about the deal, Trump, as he walked through the factory, said: “I think it’s great.”

In an unusual move for an incoming president, Trump later was to rally supporters in Cincinnati at the same sports arena where he drew huge crowds during his campaign. The rally, which Pence also attending, is one in a series of similar expected events in battleground states in the coming weeks.

Trump aides on Thursday continued to promote his role in keeping the Carrier jobs in Indiana, calling it a prime example of his campaign pledge to rebuild American manufacturing.

“This is a big win for the incoming administration and an even bigger win for the people of Indiana. Even bigger than that is the message this is sending to American workers around the country,’’ Jason Miller, a senior Trump communications adviser, said on a conference call with reporters.

Carrier, in a statement Wednesday, said that saving the jobs “is possible because the incoming Trump-Pence administration has emphasized to us its commitment to support the business community and create an improved, more competitive U.S. business climate.’’

Trump’s deal came under fire Thursday as just another corporate subsidy by Vermont Sen. Bernie Sanders (I-Vt.), who ran for the Democratic nomination. In an opinion piece published by The Washington Post, Sanders accused Trump of reversing course on a pledge to punish companies that outsource manufacturing jobs. Instead, Sanders said, Trump is rewarding them.

House Speaker Paul Ryan (R-Wis.) however, defended the deal at a Thursday news conference. “I think it’s pretty … good that people are keeping their jobs in Indiana instead of going to Mexico,” Ryan said.

Carrier had previously said it planned to keep about 1,000 of the factory’s workers in the state, though the company is moving forward with plans to shift production to Mexico from another Indiana facility that employs about 700 people.