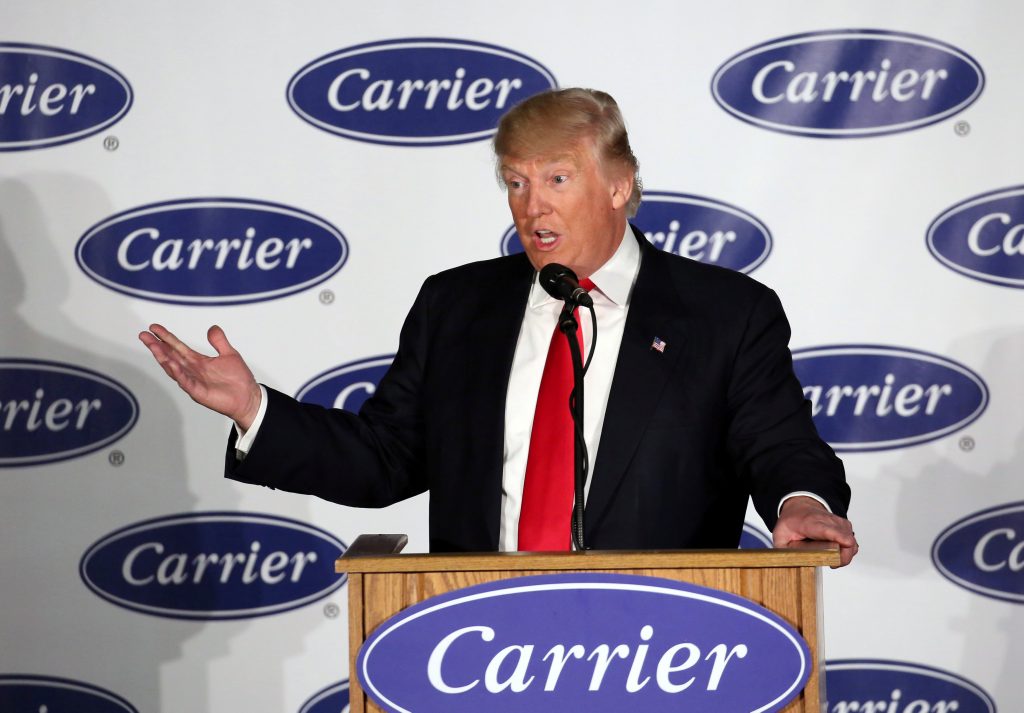 President-elect Donald Trump on Thursday warned that the government would punish companies seeking to move operations overseas with “consequences,” setting the stage for an unusual level of intervention by the White House into private enterprise.

Trump’s remarks came as he triumphantly celebrated a decision by the heating and air conditioning company Carrier to reverse its plans to close a furnace plant here and move to Mexico, helping keep 1,100 jobs in Indianapolis. About that many Carrier positions at that plant and another facility in the area will still be cut, however.

Under the terms of the agreement, which still have not been finalized, Carrier would receive a $7 million tax incentive package from the state of Indiana in exchange for making a $16 million investment in the facility – though Trump said Thursday that amount would probably be higher.

In remarks delivered inside the Carrier facility, the president-elect said more companies will decide to stay in the United States because his administration will lower corporate taxes and reduce regulations. But he also warned that businesses that decide to go abroad will pay a price through a border tax on imported goods.

“Companies are not going to leave the United States any more without consequences,” Trump declared Thursday. “Not gonna happen. It’s not gonna happen.”

Timothy Bartik, an economist at the nonpartisan W.E. Upjohn Institute for Employment Research in Kalamazoo, Michigan, said that vague threats from the president-elect could stymie corporate investment as firms seek to avoid any decisions that could draw the ire of the White House.

“What are these consequences? Who’s in charge of them?” Bartik asked.

“One of the worst things for corporate investment is uncertainty,” he added. “You would hope that the government would not add to the uncertainty.”

In Indianapolis, where Carrier has been a staple of the business community since the 1950s, the deal was celebrated.

“Our union at every level, including our local union leadership, fought to keep that plant open,” said Leo Gerard, international president of the United Steelworkers, which represents the factory’s workers.

Though it did not endorse Trump, Gerard said the union supports crucial aspects of the president-elect’s agenda, including preservation of manufacturing jobs, scrapping free-trade deals and spending on infrastructure.

“If this step is any indication of what’s to come, we look forward to working with him,” Gerard said.

Jennifer Volheim, a bartender at Sully’s Bar and Grill, down the street from the factory, said she was “heartbroken” when it was on track to shut down. But, she said, she voted for Trump and knew he would make a difference.

In fact, by Trump’s own telling on Thursday, he had no plans to intervene in the Carrier case until he watched an evening news segment featuring a worker who expressed confidence that the president-elect would save the Indianapolis plant. He said his campaign vow to save the plant was “a euphemism” for other companies.

Regardless, Trump – known for his tendency to react to TV news reports – said he immediately picked up the phone and called Gregory Hayes, the chief executive of Carrier’s parent company, United Technologies.

“I said, ‘Greg, you gotta help us out here. You gotta do something,’ ” Trump recalled Thursday.

Standing in front of a wall blanketed with Carrier’s blue-and-white logo, Trump lavished praise on the company for its decision, promising that the sales of its air-conditioning units would soar “because of the goodwill you have engendered.”

Experts said no modern president has intervened on behalf of an individual company. While Obama stepped in to rescue car manufacturers after the 2008 financial crisis and President John F. Kennedy intervened to prevent steel producers from increasing prices, these actions affected entire industries – not decisions at a specific plant, Bartik said.

Jeff Windau, an analyst at the investment firm Edward Jones in St. Louis, said that Trump may not have the “bandwidth” to keep up this kind of deal-making once in the Oval Office.

“Having a current president-elect focus on a specific company and a specific location – it’s a pretty micro view of the world,” he said.

But Trump said Thursday that he planned to personally call other companies contemplating moving operations out of the country, even, as he said, if critics felt such outreach was not “presidential.”

“I think it’s very presidential. And if it’s not presidential, that’s OK because I actually like doing it,” Trump said. “But we’re going to have a lot of phone calls made to companies when they say they’re leaving this country, because they’re not going to leave this country.”

Trump’s aggressive stance toward outsourcing comes despite the fact that his family companies profit from low-wage laborers around the globe who produce Trump-branded merchandise. His daughter Ivanka has her own separate brand of jewelry, shoes and clothing, much of which is produced in China.

Abigail Klem, president of Ivanka Trump’s company, said in a statement that the brand has “consistently expressed that we share industry [leaders’] interest in bringing more manufacturing opportunities to the U.S. and are looking forward to being a part of the conversation.” A representative for the Trump Organization did not respond to requests for comment.

United Technologies’s sales to the government have dropped in recent years, from $6.3 billion in 2013 to $5.6 billion last year, making up about 10 percent of its total revenue.

Defense analysts said that Trump could not legally steer any contracts to United Technologies or punish them through the Pentagon’s highly regulated acquisition system. The Federal Acquisition Regulations are thousands of pages long and run through an often stifling bureaucracy that determines requirements, puts out requests for proposals from industry, then embarks on a lengthy selection process that can take months, if not years.

Mackenzie Eaglen, a defense analyst at the American Enterprise Institute, said that the acquisition system can’t be used as a bargaining chip: “The short answer is no, and it would be highly illegal. Period.”