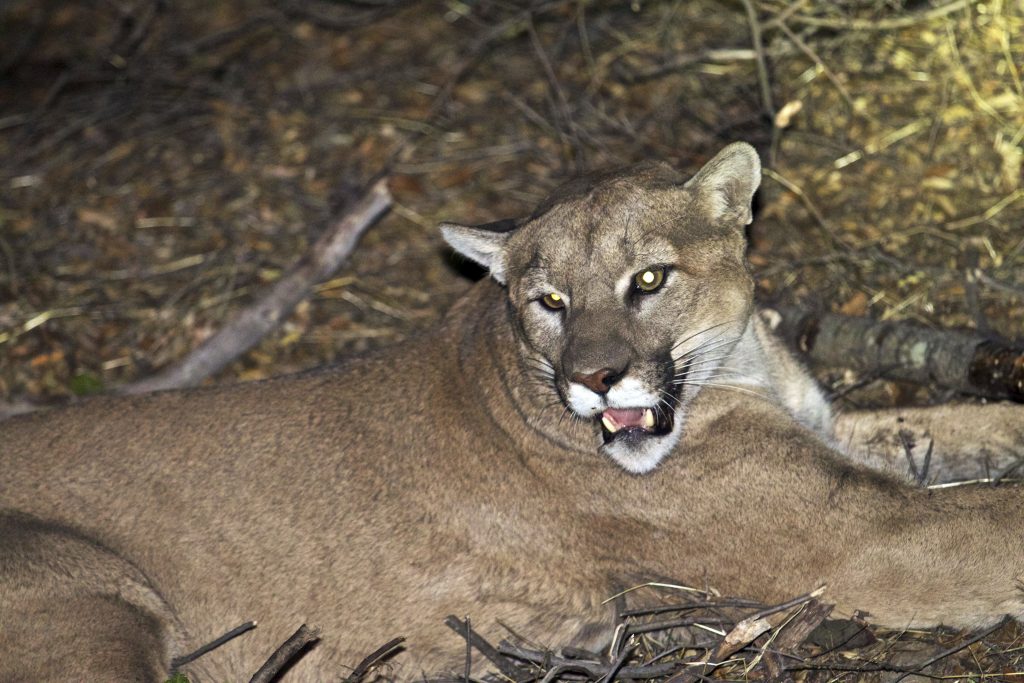 Minutes from the ocean views of Malibu mansions, a rancher has obtained a rare permit to shoot and kill a mountain lion that has been killing livestock in the area, angering animal lovers, park rangers working to protect the species and nearby Los Angeles urbanites who’ve developed an affinity for the big cats that roam their backyards.

Malibu ranch owner Victoria Vaughn-Perling obtained the 10-day permit Monday from the California Department of Fish and Wildlife after finding 10 of her alpacas dead over the weekend. A mountain lion in the area known as P-45 is believed responsible for killing the docile, llama-like animals.

News of the permit set off a social media firestorm. Hundreds of people have inundated wildlife officials with complaints, and what was supposed to be a workshop Wednesday night for residents to learn how to protect their livestock was all but hijacked by animal activists who shouted their anger over the possibility that P-45 could be killed.

“It’s sickening that this animal is going to be executed,” one person wrote on the social media page of the Santa Monica Mountains National Recreation Area. Another wrote: “So they’re going to kill a lion for being a lion. Ridiculous and shameful.”

Vaughn-Perling, who had planned to attend the community meeting before she became afraid of getting death threats, told The Associated Press she has tried various strategies to protect her alpacas from P-45 following previous attacks, including adding motion lights and electrified fencing.

“It seems to enjoy the slaughter,” she said. “This animal will attack a child or a bicyclist or a hiker because it’s so comfortable with the slaughter.”

Seth Riley, a wildlife ecologist for the National Park Service, said neither P-45 nor the 52 other mountain lions studied by the agency in the region since 2002 have ever attacked a human and there’s no evidence that they would.

He added that the cat’s killing of 10 alpacas in one night without feeding isn’t aberrant behavior.

“An animal gets into an enclosed space with a bunch of vulnerable prey animals that aren’t that smart or good at escape and they keep going after them until they aren’t moving around anymore,” Riley said.

P-45 is just one of three males during the entire 14 years the animals have been studied in the region and it’s important to the species that he stay, Riley said.

He and animal-rights advocates say livestock can be kept safe if they’re in a roofed enclosure and that there’s no need to interfere with P-45’s behavior.

Vaughn-Perling said she installed a roof on her alpaca enclosure after last weekend’s attack and that she’d prefer to have P-45 relocated rather than killed.

Her attorney, Reid Breitman, told residents and activists at Wednesday’s community meeting that Vaughn-Perling has asked the Department of Fish and Wildlife to change her permit to allow P-45 to be safely captured and relocated to an animal sanctuary.

That generated boos from the crowd, with some yelling that putting a wild animal in captivity still isn’t fair.

Jordan Traverso, a spokeswoman for the fish and wildlife department, said California state law doesn’t allow for the permit to be altered and that it’s “a permit to kill a lion which is otherwise protected under state law.”

She added that the department has reached out to Vaughn-Perling and is evaluating options.

“None of the options are very good for the animal,” she said. “Captivity is not a very good option for a wild animal, nor is relocation. We’re in a difficult space.”

Riley rejected the idea of moving P-45 to other wild land.

“There’s not some lion Shangri-La where we can put the lions,” he said. “From our perspective it’s a pretty simple solution: If you have livestock in natural areas, you need to protect them from the wildlife.”

Wendell Phillips, a neighbor of Vaughn-Perling’s, said he obtained his own permit to kill P-45 in March after some of his alpacas were attacked and that he shot at the cat back then and grazed it.

He said P-45 is believed to have killed more than 50 animals in the area in the last year and that the issue became personal for many when one woman’s longtime service animal, a miniature horse named Marco Polo, was killed last month.

“People have to unfortunately come before animals and the call I’m afraid to get is, ‘My kid’s missing’ or, ‘My wife’s been attacked,’ ” Phillips said. “Nobody wants that call.”

Phillips said he’s also in favor of having P-45 moved, “but I keep getting told by various agencies, ‘That’s against our policy.’”