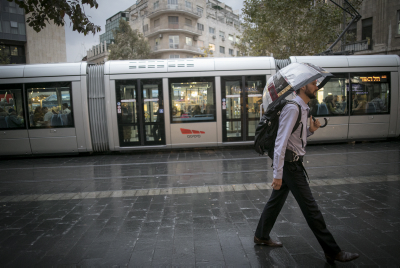 Like day and night – or more accurately, summer and winter – the weather in Israel is set to change dramatically between Tuesday night and Thursday morning. Where Tuesday saw balmy temperatures reminiscent of April or September, Thursday is likely to feel more like December or January – just days after hundreds of wildfires and arson-related events burned hundreds of homes and destroyed thousands of dunams of forest growth.

The aftermath of those fires have left a great deal of ash and dust behind, and the Israel Electric Corporation said that the debris could negatively affect power distribution if demand rises in the wake of the cold weather expected through the weekend. With that, the IEC said that it had increased manpower and taken all possible preparations. However, the heavy winds of the past week – and the heavy winds expected to accompany Israel’s first major winter storm – could knock power lines down after they were weakened by the easterly winds that last week facilitated the spread of the fires.

Heavy rain is expected by Wednesday night in the north and northern coastal areas, spreading by Thursday morning to the center and later to the south of the country. The heavy rains will continue through Friday, giving the country a good soaking and dousing what remains of the smoldering embers of the fires. Temperatures will drop, and snow will fall in the Chermon. Where fires were a problem in Haifa and northern communities last week, this week’s problem is likely to be flooding, as drainage systems are still backed up from the debris that has piled up over the summer.

Magen David Adom called on drivers to be extremely careful, as the roads are likely to be oily. MDA also recommended tying down loose items outside homes, to prevent them from flying away in the wind.