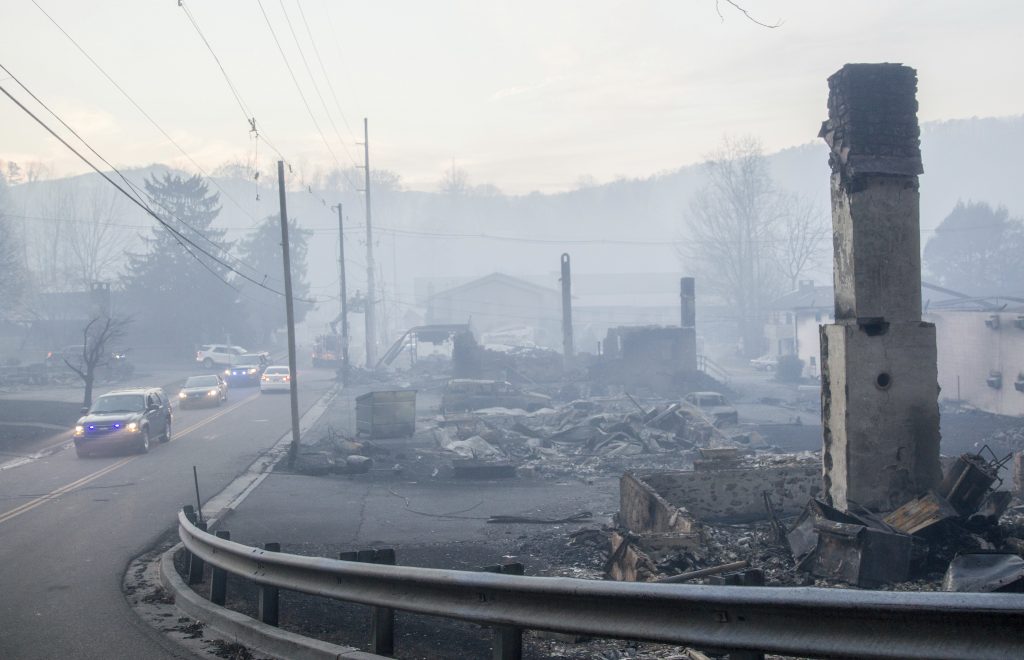 Thunderstorms dumped much-needed rain on eastern Tennessee overnight as thousands of people waited anxiously for news about their homes after wildfires tore through this resort community, killing at least seven people.

A mandatory evacuation order remained in place for Gatlinburg, as firefighters monitored a few remaining hot spots in the area near the Great Smoky Mountains, and officials gave no timetable for when people may be allowed back into the city.

There were severe thunderstorm warnings for the area, ahead of a line of storms moving across the Southeast. Those storms had already spawned possible tornadoes in parts of Alabama and Tennessee, killing five people and injuring more than a dozen. Officials in the Gatlinburg area were worried about mudslides, rock slides and high winds knocking trees onto power lines, perhaps creating new fires similar to the deadly ones that sparked Monday night.

Tod Hyslop, a meteorologist with the National Weather Service, said the region had received about an inch of rain and the forecast called for thunderstorms to pick up in the afternoon and taper off by early evening.

“The rain is going to help with the suppression of some of the active fires. The rain may help prevent some of the further brushfires. But I also want to say that unless that rain penetrates deep enough into that duff, into that leaf clutter, then those hotspots can still arise,” Gatlinburg Fire Chief Greg Miller said.

At the Rocky Top Sports World complex on the outskirts of town, 30-year-old Wolf McLellan stumbled into the Red Cross shelter after a day of wandering the streets. He was forced to evacuate the hotel where he was staying. He grabbed his guitar, two computers and his social security card and tried to flee with his dog, Kylie.

“She was too scared to move with the smoke and sirens and she just stood there. I didn’t want to drag her. I couldn’t drag her,” he said. “I figured the humane thing to do would be to just cut her loose.”

Tracy Mayberry lives in a house next door to a motel where the body of one of the victims was found Wednesday. He said a tree fell on his house and when he went outside to investigate, “the flames were right in my backyard.” He put his wife and 12-year-old into the car and left. He doesn’t know if his house is still standing.

“Everything we own is in the house. I mean, we got the clothes on my back and maybe one more outfit,” he said. “It’s been devastating, I’ll say that. It’s been crazy. All you can do is keep breathing, keep your head up and keep going.”

Officials in nearby Pigeon Forge lifted their evacuation order, but it’s not clear when Gatlinburg residents can go home and when visitors there can go back to their accommodations, according to the Tennessee Emergency Management Agency. In all, more than 14,000 residents and tourists were forced to evacuate the tourist city in the mountain.

“Safety is the main concern. And as of right now, it is unsafe,” Gatlinburg Police Chief Randall Brackins said. “We just can’t do that until we make sure that it is a safe environment for them to travel in.”

The fire destroyed at least 150 buildings in the Gatlinburg area.

Much remained uncertain for a region that serves as the gateway into the Great Smoky Mountains, the country’s most visited national park. Search and rescue efforts continued in areas that have been unreachable because of downed power lines and trees.

A somber reality set in for Gatlinburg, a city of about 4,000 residents that draws more than 11 million visitors a year. But even Gatlinburg Mayor Mike Werner, who lost his home in the fire, remained steadfast that his city will recover.

“A lot of the families that don’t know where to go or what’s next – we want to give that positive message that everything, absolutely, is going to be OK,” he said.

Western North Carolina is also experiencing wildfires, but firefighting officials reported Wednesday that the rains are helping to contain the fires that began in recent weeks in Clay, Graham, McDowell and Macon counties.

A wind advisory is in effect in western areas of the state through Wednesday evening with likely gusts up to 45 mph. Authorities say rain and high humidity should prevent winds from spreading the fires, but trees weakened by fire and rain will be blown onto roadways and trails.