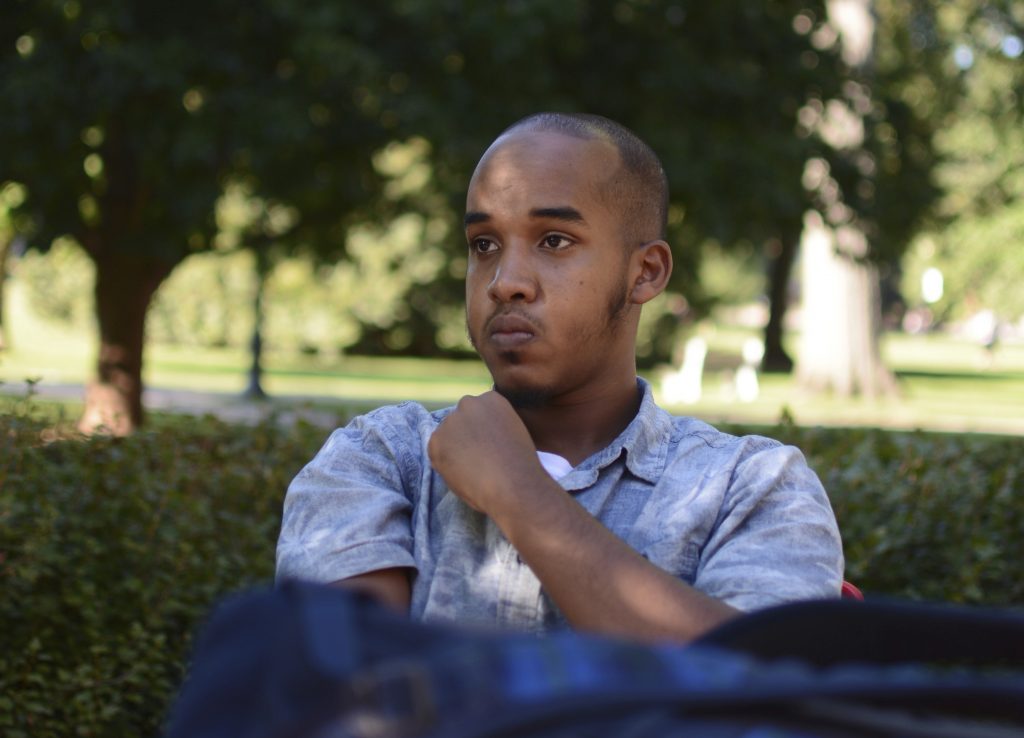 The Somali-born student who went on a car-and-knife rampage at Ohio State University railed on social media against U.S. interference in Muslim lands and warned, “If you want us Muslims to stop carrying lone wolf attacks, then make peace” with the Islamic State terrorist group, a law-enforcement official said Tuesday.

The posts from Abdul Razak Ali Artan’s account came to light after Monday’s violence, which left 11 people injured. Investigators are looking into whether it was a terrorist attack.

“America! Stop interfering with other countries, especially the Muslim Ummah. We are not weak. We are not weak, remember that,” he wrote, using the Arabic term for the world’s Muslim community.

The posts were recounted by a law-enforcement official who was briefed on the investigation but wasn’t authorized to discuss it publicly and therefore spoke to The Associated Press on condition of anonymity.

“Every single Muslim who disapproves of my actions is a sleeper cell, waiting for a signal. I am warning you Oh America!” Artan also wrote.

Dozens of FBI agents began searching Artan’s apartment for clues to what set off the rampage.

Artan drove a car up onto a sidewalk and plowed into a group of pedestrians shortly before 10 a.m. He then got out and began stabbing people with a butcher knife before he was shot to death by a campus police officer.

Most of the victims were hurt by the car, and two had been stabbed, officials said. One had a fractured skull. Three remained hospitalized Tuesday.

Engineering professor William Clark, who underwent surgery for deep cuts on his leg, recalled at a news conference Tuesday being hit by the car from behind and being thrown through the air.

“When the car hit me, I really didn’t know what to think,” he said, adding he next heard screams from students. “That’s when I figured out it was more than a car accident.”

On Tuesday, a self-described Islamic State news agency called Artan “a soldier of the Islamic State” who “carried out the operation in response to calls to target citizens of international coalition countries.”

The Islamic State has previously described other attackers around the world as its “soldiers” without specifically claiming to have orchestrated the acts of violence.

Artan was born in Somalia and was a legal permanent U.S. resident, according to a U.S. official who was not authorized to discuss the case and spoke on condition of anonymity.

A law enforcement official said Artan came to the United States in 2014 as the child of a refugee. He had been living in Pakistan from 2007 to 2014. It is not uncommon for refugees to go to a third-party country before being permanently resettled.

Upon arriving in the U.S., Artan was referred for a secondary Customs and Border Protection inspection, but nothing abnormal was found, according to a U.S. official who was briefed on the investigation but was not authorized to discuss it and spoke on condition of anonymity. A secondary inspection is often routine and based on someone’s travel history and length of stay in certain countries.

Artan started college that fall and graduated with honors from Columbus State Community College last May, earning an associate of arts degree. A video of his graduation ceremony shows him jumping and spinning on stage and smiling broadly, drawing laughs, cheers and smiles from graduates and faculty members.

Classes for the 60,000 students at Ohio State, where Artan began taking classes this fall, were canceled after the attack, but resumed Tuesday. The school planned a vigil for Tuesday night.

Students said they were nervous about returning and planned to take precautions such as not walking alone.

“It’s kind of nerve-wracking going back to class right after it,” said Kaitlin Conner, 18, of Cleveland, who said she had a midterm exam to take.

Ohio State’s student newspaper, The Lantern, ran an interview in August with Artan in which he criticized the media’s portrayal of Muslims and expressed concern about how he would be received on campus.

“I was kind of scared with everything going on in the media. I’m a Muslim, it’s not what media portrays me to be,” he told the newspaper. “If people look at me, a Muslim praying, I don’t know what they’re going to think, what’s going to happen. But I don’t blame them. It’s the media that put that picture in their heads.”

Rep. Adam Schiff of California, the top Democrat on the House Intelligence Committee, said the act bore the hallmarks of an attack carried out by someone who may have been self-radicalized.

In recent months, federal law enforcement officials have raised concerns about online terrorist propaganda that encourages car or knife attacks, which are easier to pull off than bombings. The Islamic State terror group has urged sympathizers online to carry out lone-wolf attacks in their home countries with whatever weapons are available.

Artan was not known to the FBI before Monday’s attack, according to a law enforcement official who was not authorized to discuss the investigation and spoke on condition of anonymity.

Neighbors said he was always polite and attended daily prayers at a mosque on the city’s west side.

Leaders of Muslim organizations and mosques in the Columbus area condemned the attacks while cautioning people against jumping to conclusions or blaming a religion or an ethnic group.

Surveillance photos showed Artan in the car by himself just before the attack, but investigators are looking into whether anyone else was involved, police said.