Israel Arson the Cause of at Least Nine Fires, Police Determine
Israel 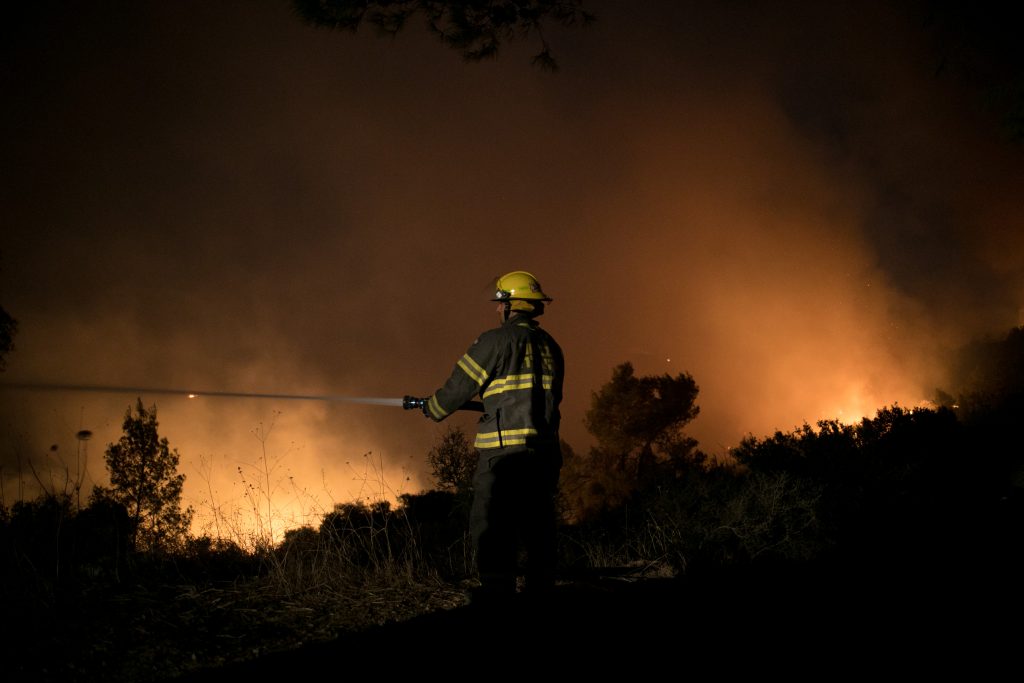 Although investigations are still pending in some cases, the Israel Police and Tax Authority on Tuesday released an initial list of the forest fires that were determined to have been set by arsonists. Included in the list of nine blazes are some of the biggest fires that took place last week, among them those in Zichron Yaakov, Dolev, Talmon, Haifa, Nirit, Neve Tzuf and Chalamish.

While some of the others that broke out in different parts of the country were wildfires that ignited due to negligence or other factors, the Authority and police said in a statement that there was still work to do. “Investigations have either not been completed or there was no damage to property in those fires, and some of them are still not completely doused. If evidence arises that would indicate that they were started by arsonists, the list will be updated.”

The upshot for residents of the places on the list is that they will receive compensation for their losses from the government. On Tuesday, hundreds of Tax Authority workers arrived in Haifa in order to begin the process of compensating victims. Among the workers are dozens of insurance adjusters, who will determine the level of loss to property and structures and apply for compensation from the government. On Sunday, Finance Minister Moshe Kachlon said that he had ordered officials “to evaluate all the damage to homes by Thursday the latest. The adjusters will quickly make their report, and we will transfer the funds due to each household within 24 hours.”

Thousands of people, including the tens of thousands who were evacuated from their homes in Haifa last Thursday as blazes spread throughout the city, are eligible for an initial payment of NIS 2,500 to cover their immediate costs. Those payments will be distributed on Tuesday and Wednesday, Kachlon said. To help victims get back on their feet, the finance minister promised over the weekend that the government would cover all direct expenses related to the fires, and that the government had allocated tens of millions of shekels for this purpose.

However, industry experts said, Kachlon’s reassurances may not be enough. The criteria for payments due victims from the government for terror attacks and from insurance companies are likely to differ; specific household items that were insured via riders to home policies taken out with the latter are unlikely to be paid for by the former, for example. The government will also use its own criteria in order to evaluate damage costs, as well as the market value of a home, and that, too, could differ considerably from the compensation a victim would get from an insurance company.

Speaking to Israel Radio, Ehud Hameiri, chairman of the Israeli Insurance Adjusters Association, said that victims will be much better off if the fires are not declared to be acts of terror. “The government insurance policy for payment of damage to household items is limited to NIS 100,000,” he said. “Anyone who was insured for more than that is going to lose out, because the insurance companies will not pay the difference.” While some would benefit – specifically poorer Israelis or those who did not have household protection policies – the areas where homes were damaged or destroyed were generally wealthier areas, where residents were likely to have policies.

In response, coalition chairman MK David Bitan (Likud) said that the government was working with insurance companies to ensure that all victims were fully compensated, regardless of how the police classify the fires.