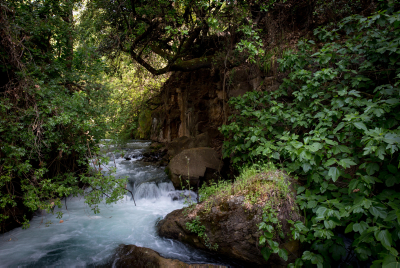 The lack of rain and extremely dry weather that facilitated the spread of major fires in Israel last week has also been an important factor in the rapid evaporation of streams in Israel’s north and in the hills, Environment Ministry officials said. While rain is predicted for later this week, there would need to be a month of major rainstorms to restore Israel’s water economy to a positive balance and make up for the water lost in the past months, experts said.

The flow of water in streams and rivers around the country is among the weakest ever recorded. Waterfalls and streams in northern Israel, including the Tel Dan and the Banias reserves, are missing a great deal of water, and the Kinneret is closing in on the “black line,” below which the lake is in danger of dying.

Rain is expected to arrive in Israel midweek in the form of a major winter storm. Winds will pick up again on Tuesday – but this time, the winds will bring in not dry air from the east, but cold and damp air from the west. It’s a prelude to the major storm developing in the eastern Mediterranean, propelled by winter weather systems in Europe, that forecasters and ordinary Israelis hope and pray will bring an end to the devastating dry spell the country has undergone, along with its tragic consequences. Rain is expected to begin Tuesday night or Wednesday, with Thursday stormy, and the weather clearing out only on Shabbos.

Daytime temperatures will remain relatively high for this time of year, but that too will change on Tuesday night into Wednesday, as cold air enters the region. Snow is expected on the Hermon and in the extreme north, while heavy rain and thunderstorms will hit the center and south of the country. The soaking should be sufficient to douse whatever remains of the fires that have been burning throughout the country over the past week, forecasters said.