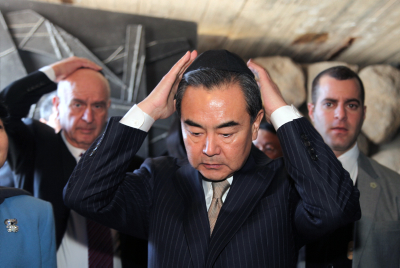 In a sign of the times, the Carta map company, Israel’s most prominent mapmaker, has come out with a Chinese-language version of a map of the Old City of Yerushalayim. The decision to release the map came after a sharp rise in requests for a Chinese translation, to serve the 50,000-some Chinese tourists who have visited Israel so far this year.

That number is expected to double in 2017, as business relations between China and Israel filter down to the rest of the population, which is seeking new venues for travel experiences. Relaxation of campaigns against religious belief by the Communist government has led to an increase in the number of religious groups who are interested in visiting Israel, and the growing middle class, which is more aware of Israel because of the increased levels of investment by Chinese groups in Israeli tech firms, are interested in visiting as well.

Carta is working on a translation of a map of Tel Aviv into Chinese too, as well as a Chinese-language map of the entire country, said Shai Hausman, the company’s CEO. “This is a sort of repeat of what happened in the 1980s when we translated our maps into Russian. Many people at the time did not understand why we would bother to do that, but just a short time afterward masses of Russian Jews began arriving in Israel. Now, too, many people have asked why bother – and now we hear that tourism from China is set to double in just the next year.”