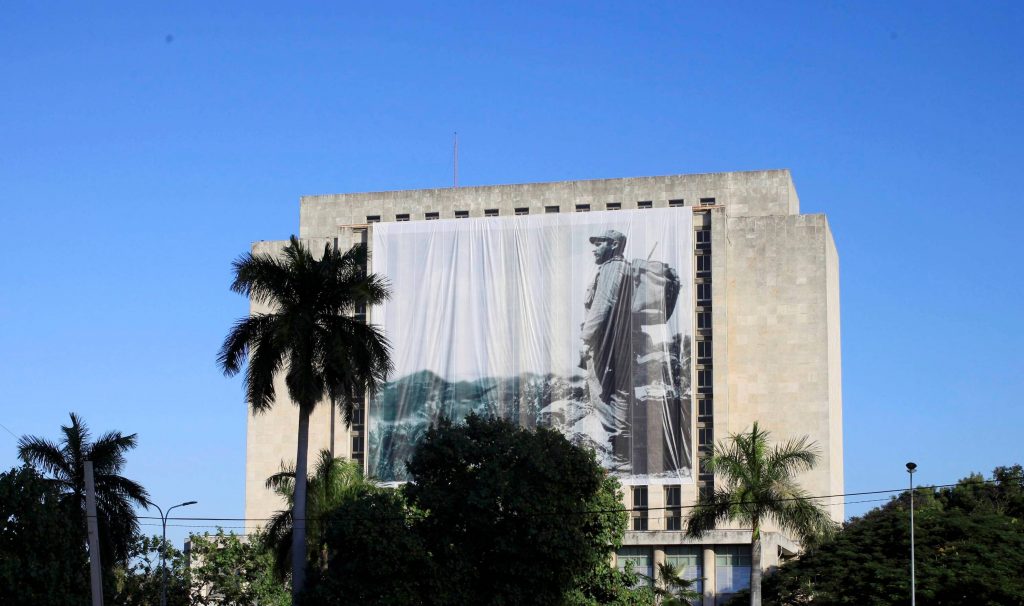 Thousands of Cubans, holding images of Fidel Castro, flowers and Cuban flags, began lining up early near Havana’s Plaza of the Revolution to pay their respects to the former ruler known on the island as “El Comandante.”

The procession in Havana is the start of weeklong services that will spread across Cuba, ending in Santiago de Cuba, where the revolution was launched.

The plaza, a massive concrete expanse where Cubans have gathered at key moments in the island’s history, will be open from 9 a.m. until 10 p.m. The tribute will continue Tuesday before Castro’s remains begin making a journey across the island Wednesday on a route that is the reverse of the one Cuban revolutionaries took in 1959 from eastern Cuba to Havana after the triumph of the revolution.

One of the first in line was Tania Jimenez, 53, a mathematician who arrived at 4 a.m. carrying a rose.

“Fidel is everything to us, the soul of this country who gave everything, all his life,” Jimenez told the Associated Press.

A nine-story image of a young Castro joined the towering images of fallen guerrillas overlooking the massive square where the government said that Cubans would “render homage and sign a solemn oath to carry out the concept of the revolutionary expressed by the revolutionary leader,” AP reported.

By early Monday, Cubans on the island began to filter onto the streets.

Flag-waving students broke into a mass chant of “I am Fidel,” Reuters reported.

Government-run newspapers were printed in black ink to mourn Fidel, instead of the usual red of the official Communist Party daily Granma, and the blue of Juventud Rebelde (Rebel Youth), the paper of the Communist youth.

“For me, it’s my mother first, my children, my father, then Fidel,” father-of-five Rafael Urbay, 60, told Reuters as he manned a government photo and printing store in downtown Havana, remembering his early years spent on a remote island off the mainland with no drinking water.

“We weren’t just poor. We were wretched,” he said. “Then came Fidel and the revolution. He gave me my humanity. I owe him everything.”

As condolences continued to flow into Cuba Sunday from around the world for the man who was both admired and reviled during his nearly half century at Cuba’s helm, workers prepared the plaza and unfurled a giant banner of Castro as a young revolutionary over the National Library building that overlooks the square.

Cuban media aired detailed instructions on the routes Cubans should use to access and enter the plaza and the Cuban armed forces said there will be simultaneous 21-gun salutes in both Havana and Santiago at 9 a.m. Monday and on Dec. 4 in homage to Castro.

The United States had not announced as of late Sunday whether a U.S. delegation will attend Castro’s funeral services, which are scheduled for Dec. 4 in Santiago.

But former House Speaker Newt Gingrich tweeted Sunday: “Under no circumstances should President Obama or VP Biden or Secstate Kerry go to Cuba for Castro’s funeral. He was a tyrant.”

In her message of condolence, Chilean President Michelle Bachelet called Castro “a leader for dignity and social justice in Cuba and Latin America,” and Canadian Prime Minister Justin Trudeau said Canadians “were united with the Cuban people in their mourning for the loss of an extraordinary leader” who was “a revolutionary and a legendary orator.”