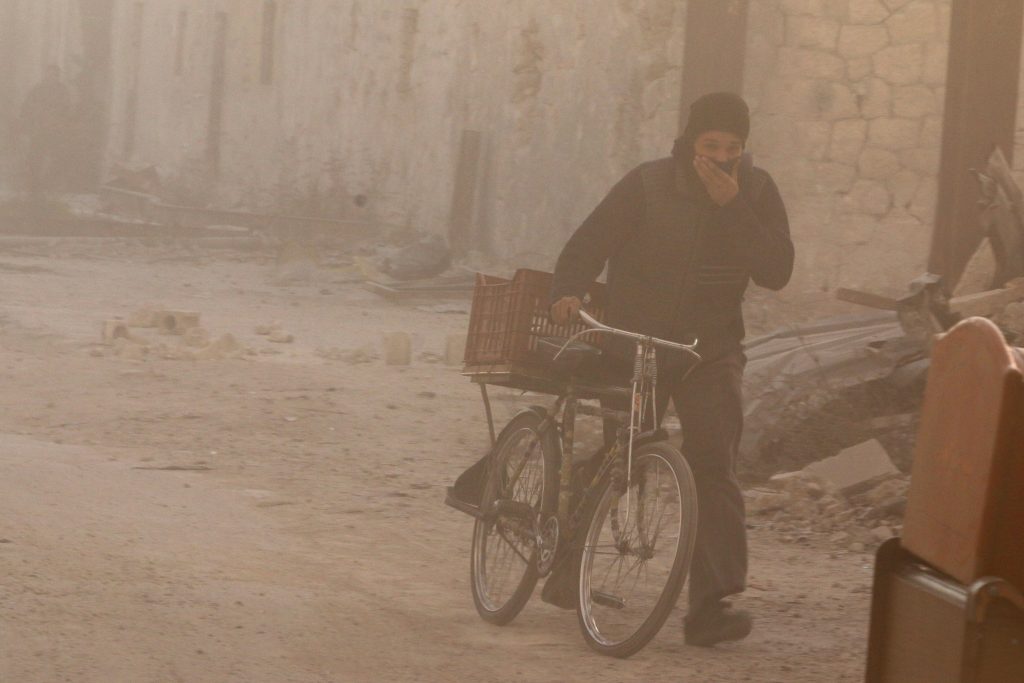 Syrian government forces advanced deep into eastern Aleppo on Sunday amid a swift collapse of rebel defenses inside the divided northern city, threatening to cleave the opposition’s enclave between its northern and southern parts.

The advance into the city’s Sakhour neighborhood brings the military within a half-mile of commanding a corridor in eastern Aleppo for the first time since rebels swept into the city in 2012, according to Syrian state media and an external monitoring group.

Residents in the east of the city expressed distress among opposition circles on social media and in messaging groups.

“The situation in besieged Aleppo (is) very, very bad, thousands of eastern residents are moving to the western side of the city,” said Khaled Khatib, a photographer for the Syrian Civil Defense search-and-rescue group.

“Aleppo is going to die,” he posted on Twitter.

Syrian state media broadcast a video Saturday showing a teary reunion between a soldier and his family after nearly five years apart, according to the report. It said the family had been trapped in Masaken Hanano.

The Lebanese Al-Manar TV channel reported from the neighborhood Sunday morning, showing workers and soldiers clearing debris against a backdrop of bombed-out buildings on both sides of a wide avenue. Al-Manar is operated by Hezbollah, the Lebanese terrorist group aligned with the Syrian government.

The Britain-based Syrian Observatory for Human Rights, which monitors the war through local contacts, also reported the advance. It said some 1,700 civilians had fled to areas under government control.

The government’s push, reportedly backed by thousands of Shiite militia fighters from Lebanon, Iraq, and Iran, and at times by the Russian air force, has laid waste to Aleppo’s eastern neighborhoods.

Aleppo used to be Syria’s largest city and commerce capital before its neighborhoods were devastated by the country’s more than five-year-long civil war.

An estimated quarter-million people are trapped in wretched conditions in the city’s rebel-held eastern districts since the government sealed its siege of the enclave in late August. Food supplies are running perilously low, the U.N. warned Thursday, and a relentless air assault by government forces has damaged or destroyed every hospital in the area.

The U.N.’s child agency warned Sunday that nearly 500,000 children were now living under siege in Syria, cut off from food and medical aid, mostly in areas under government control. That figure has doubled in less than a year.

Many are now spending their days underground, as hospitals, schools and homes remain vulnerable to aerial bombardment.

“Children are being killed and injured, too afraid to go to school or even play, surviving with little food and hardly any medicine,” said UNICEF Executive Director Anthony Lake. “This is no way to live — and too many are dying.”

Activists also reported Sunday tens of civilian casualties from a presumed government or Russian airstrike on a village outside Aleppo.

The Local Coordination Committees activist network in Syria reported 15 civilians killed in a Russian airstrike on the village of Anjara, controlled by the opposition in the western Aleppo countryside, and tens of others wounded. Activists usually identify planes by their silhouettes and home base.

The Britain-based Observatory said the strike was accompanied by raids on other opposition-held villages in the Aleppo countryside.

Meanwhile, Anadolu also reported Sunday that the Islamic State terrorist group had used chemical weapons against Turkish-backed Syrian opposition fighters in northern Syria, wounding 22. The report cited a statement by the chief of general staff’s office. The report could not be immediately verified independently.

Later Sunday, Turkey’s emergency relief directorate, which investigated the claim, said it found no trace of chemical warfare. The military was not available for further comment.