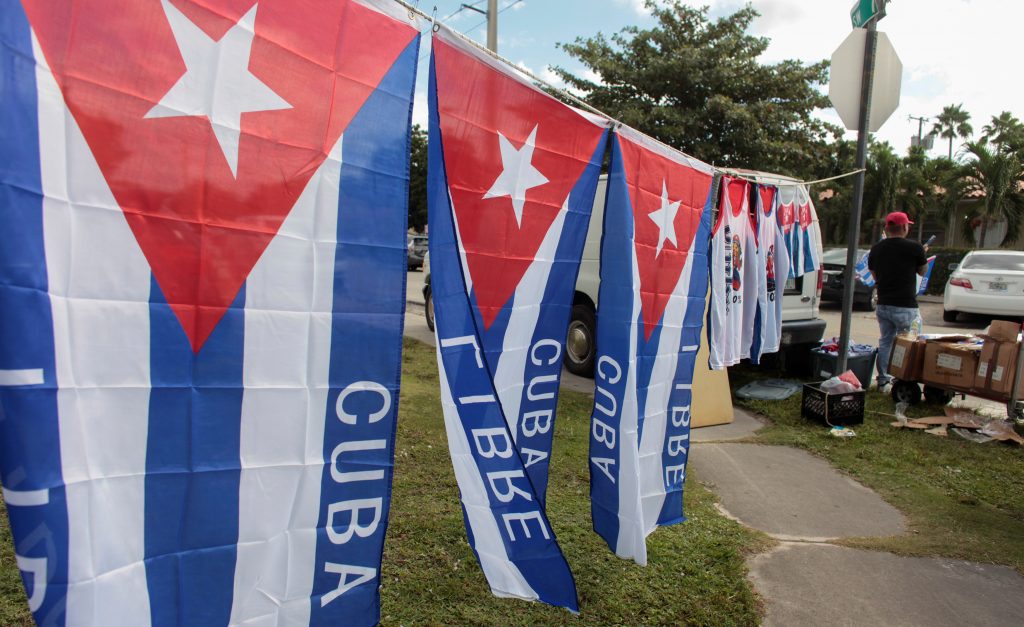 Fidel Castro died, and Cuban Miami did what it does in times of community celebration: It spilled onto the streets of Little Havana — and Hialeah, and Kendall — to honk horns, bang pans, and set off more than a few fireworks, saved for exactly the sort of unexpected special occasion that proved worthy of their detonation.

The scene across Miami-Dade County, the cradle of the Cuban exile community, was one of pure, raw emotion. This time, after decades of false alarms, Castro’s death was real.

“I wish my dad was here to see this,” 27-year-old Abraham Quintero cried just before 2 a.m. Saturday.

Wearing an “I love Hialeah” T-shirt, he stood on West 49th Street and Ludlam Road, where police quickly set up watch posts to make sure impromptu revelers stayed safe.

Passing cars honked incessantly. People waved huge Cuban flags. Parents carried their children and puppies. A few people appeared clad in pajamas and, in one case, flamingo slippers, jolted out of bed — and out of their homes — by the late-night news.

Shortly after midnight, Cuban leader Raúl Castro announced, his voice trembling, that his older brother had died at 10:29 p.m.

“Toward victory, always!” he said.

The streets in Havana, where a nine-day mourning period was announced, appeared to remain quiet. Not so in Miami, the city across the Florida Straits shaped by exiles who fled Fidel Castro’s 1959 revolution.

Calle Ocho remained closed to traffic, from Southwest 35th to 37th Avenues, to accommodate the elated crowds gathered at Versailles Cuban restaurant, the iconic exile hangout, to cheer and wave signs — no matter how unseemly it might be to revel in an old man’s death.

Some even yelled profanities about Castro.

Someone outside the restaurant brought a portable karaoke system, and the crowd sang Cuban Willy Chirino’s exile anthem, “Nuestro día ya viene llegando” (Our day is coming), as the scent of long-saved Cuban cigars burned at last.

People were still popping champagne bottles in the middle of the street after 4 a.m. — an eruption of jubilation that remained peaceful throughout the night and into Saturday morning.

“I don’t think we’ve made any arrests and don’t expect to have any violence due to this long awaited day,” said Miami Police Officer Rene Pimentel.

Pimentel, a Cuban-American whose family tried for 15 years to leave the island, said he awoke early Saturday to text messages alerting him of Castro’s death — news he was eager to share with his father, who moved the family out of Cuba on Sept. 29, 1975.

“It was a great feeling to wake my dad and tell him that the day so many of us had been waiting for was finally here,” he said. “Fifteen long years to get to this great country.”

Miami Mayor Tomás Regalado deployed himself to Versailles after midnight and was there when the sun came up, chatting up the crowds and conducting interviews in what has become the unofficial media staging ground for capturing Miami’s reaction to major Cuban news.

The Cuban-born mayor, whose father served 14 years in prison under Castro, said there was little use in trying to steer the celebration toward any sort of official venue or event.

“Everything has been spontaneous,” said Regalado, 69, who came to the United States in 1961 under the Pedro Pan program. “The only thing that the city has done is accommodate the people.”

“The written plans are no good because people do what they want,” he continued. “I’ve gotten calls from some organizations saying how they want to organize an event. But to tell people to go to a specific place, you can’t. People go where they want to go.”

A relative hard-liner on U.S.-Cuba relations — Regalado opposed putting a Cuban consulate in Miami but didn’t object to the idea of running Havana-bound ferries out of Port Miami — the mayor said the Cuban people should feel a sense of unity in the celebrations on Miami’s streets.

“I think what’s happening right now is a sign of solidarity with the people of Cuba,” he said.

As the crowd swelled to hundreds outside Versailles’ cafecito window in the predawn hours, a panoply of Latin American immigrants who have followed Cubans to Miami, including Venezuelans, Colombians and Puerto Ricans, turned out in a show of support.

The mood was festive, with periodic outbursts of anger at Raúl Castro.

“One down, now comes the other,” yelled Enrique Rodriguez, 58, to cheers.