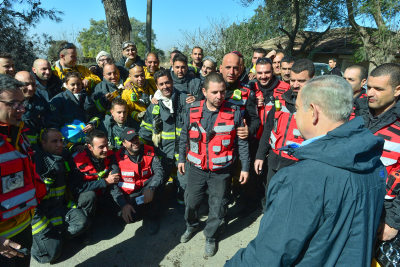 Nearly two dozens Arabs were in custody Motzoei Shabbos for their role in setting fires or inciting others to set fires over the past several days. Numerous suspects were taken into custody after being observed directly by security forces trying to set fires and running away. The IDF said that it had deployed several “technological innovations” in order to catch arsonists. Several of the suspects were arrested after they had set fires and returned to their villages.

Footage released by the IDF clearly shows numerous instances in which IDF aerial cameras recorded Arabs setting fires and running away. In one instance, footage showed a 44-year-old Arab resident of the village of Husan, near Beitar Illit, attempting to start a fire in Menachem Begin Park, a large forested area south of Yerushalayim. The Arab was detained and questioned, and police plan to seek an extension of his remand.

If the acts of arson are equivalent to acts of terror, the arsonists should be treated as terrorists, Public Security Minister Gilad Erdan said Motzoei Shabbos. “Most of the people we arrested were Arab residents of Yehudah and Shomron, with several Israeli Arabs,” Erdan told Channel Two. “We arrested 35 people, 23 of whom are still in custody. Several of them were arrested for incitement. This is a new kind of terror. The incitement that previously prompted young Arabs to stab people in Yerushalayim is now being used to incite people to take advantage of the weather and burn people’s homes. It is shocking to think how these human animals are trying to burn down whole towns and the people in them.”

Erdan said that the same punishments meted out to terrorist stabbers should be applied to terror arsonists. “We have proven tools to deal with these situations, such as demolition of houses. We need to demolish the houses of these terror arsonists.”

Meanwhile, Prime Minister Binyamin Netanyahu phoned Palestinian Authority chief Mahmoud Abbas on Motzoei Shabbos to thank him for sending assistance to battle the blazes that blanketed Israel this past week. Abbas sent several firefighters and fire trucks, most of which were used in Haifa. “The prime minister appreciates the fact that Jews and Arabs together opened their homes to help those who were hurt by the fires,” Netanyahu’s office said.