Israel State of Emergency in Haifa, as Tens of Thousands Leave Their Homes
Israel 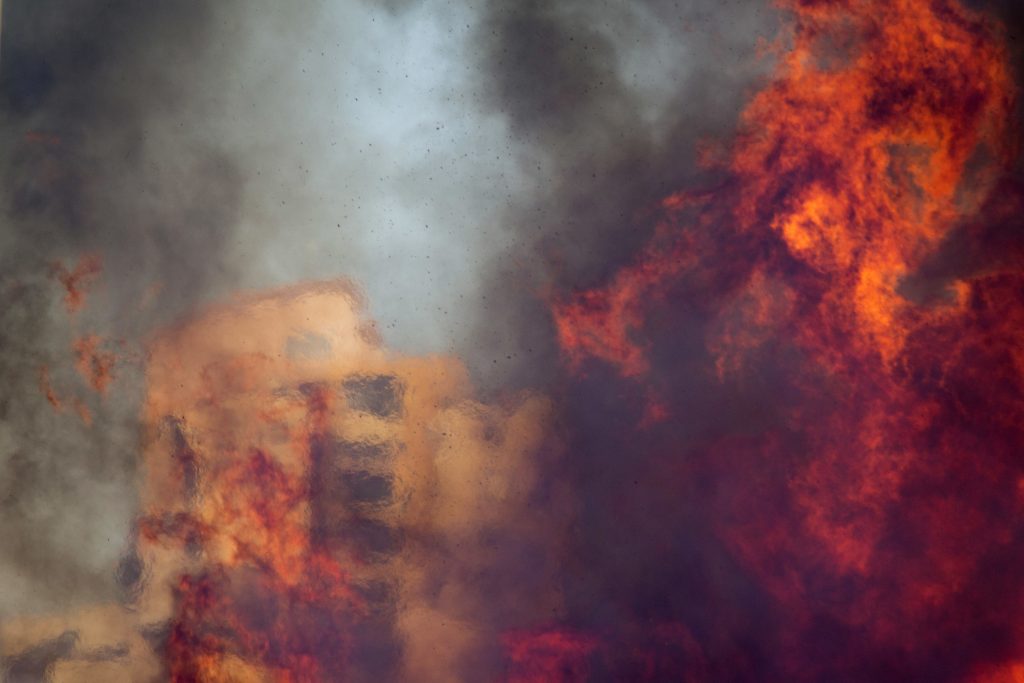 Haifa was under a state of emergency Thursday afternoon, with tens of thousands of residents evacuated from over a dozen neighborhoods in the city. At least six major blazes were burning across the city, with the biggest and most serious in mid-Mount Carmel. Flames had reached the tony Denya neighborhood at the top of the mountain, and was threatening to spread into the Carmel Forest.

Nearly 100 people were being treated for smoke inhalation and other fire-related issues at Rambam Hospital in the city. Fourteen planes were flying around the city, dropping flame-retardant foam on the flames in the hope of preventing them from spreading. Hundreds of firefighters have been drafted to help bring the fires under control, but officials said that that was likely a long way off. Haifa University and the Technion were evacuated, and officials were making preparations to evacuate two prisons. “The fires, especially in the Romema area, have the potential to bring about major damage, both to property and people, said Uri Chibutoro, a spokesperson for the Haifa fire department. “This is like a state of war.”

Residents who were ordered to leave their homes complained of traffic jams of up to two hours, as residents of numerous neighborhoods who use the same main thoroughfares attempted to leave at the same time. The fires were first reported at about 11 a.m.Thursday, with police ordering the evacuation of two neighborhoods. About an hour and a half later, another dozen neighborhoods were evacuated, as firefighting planes blanketed threatened neighborhoods with foam in order to prevent the spread of the flames.

Most of the fires were in residential areas, but one, next to the Shemen Beach in the lower city, threatened several industrial buildings. Dozens of firefighters earlier worked intensively to prevent the flames from reaching a major gasoline facility, out of fear that it would ignite and explode. Haifa Mayor Yona Yahav said that “this is unprecedented, the worst urban fire in Israel’s history. We decided to conduct a large scale evacuation based on lessons of the past, especially the Carmel Forest fire a decade ago.”

Meanwhile, anti-Arab sentiment was growing among many Israelis, who were angered at the “celebrations” of Arabs over the fires. Hamas, commenting on the blazes, praised them and called for Arabs to “go out and burn the Zionists.” The NRG news site reported dozens of social media posts in Arabic that expressed happiness over the fires. On one forum discussing the proposed law to prevent mosques from broadcasting their call to prayer in the early morning hours, one post said that the Israelis “tried to prevent the mosques from conducting prayers, now they are burning up.” Another post said that “this is our land, and Israel will continue to burn until we return free to it.” A social media tag in Arabic, “Israel is burning,” was trending on Thursday.

Speaking to Channel Two, United Arab List MK Ayman Oudeh demanded that the channel stop using the term “Fire Intifada” to describe the events of the last several days, as hundreds of fires were set throughout the country. Fire officials said that all six of the fires in the city were set by arsonists, and the Shabak has opened an investigation into the fires, which have been burning in different parts of the country since Tuesday.

Oudeh denied that Arabs were involved. “We value nature and especially the nature around Haifa, where we have lived for centuries,” he said. “I demand that you stop using this rhetoric to inflame the public.” Oudeh said that the evidence police and security forces had gathered regarding the intended setting of fires in many of the blazes was irrevelant. “We are talking about individuals, and you are talking about groups. I live on the Carmel, why would I set fire to my own home?” When asked if he would classify these acts of arson as terror, Oudeh said, “I don’t know.”

Meanwhile, fires had reached the center of the country as well. A major fire was raging near Kfar Vradim, outside Rishon Letzion, and fires broke out at the two train stations at Modi’in. Much of the Israel Railways system was shut down Thursday afternoon, although officials expressed hope that the system could be brought back online before the Thursday rush hour.

Chessed groups were marshaling resources to house and feed the tens of thousands who had been evacuated from Haifa. The city is home to many elderly people, some of whom do not have families, and many families of new immigrants were also without resources. Groups were busy collecting food and arranging for beds, as well as for places for the evacuees to stay, at least over Shabbos. Fire officials said it was unlikely that the flames would be brought under control in the coming hours, and even if that did happen, it would be at least a day or more before residents would be allowed to return to their homes.