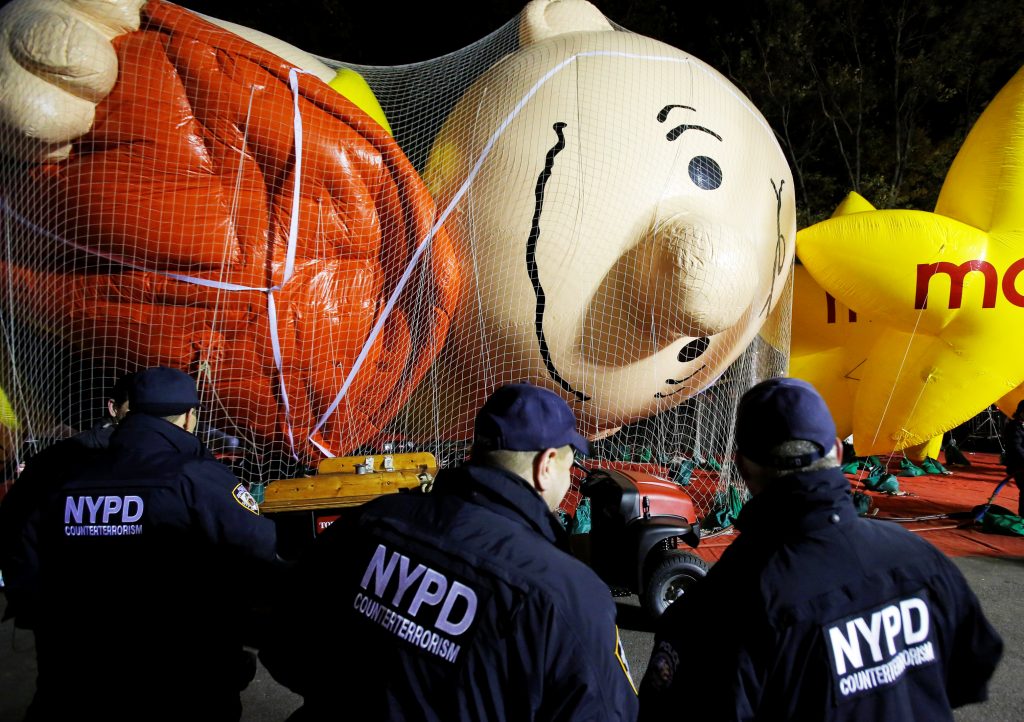 The NYPD will use sand-filled trucks, radiation detectors, bomb-sniffing dogs and heavily armed officers on Thursday to defend the annual Thanksgiving Day Parade, which the Islamic State terror group has encouraged its followers to attack.

Officials expect 3.5 million people to converge on the 2.5-mile parade route in Manhattan for the annual parade.

The 82 sand trucks from the Sanitation Department will be used to counter a threat by the Islamic State terror group, which has called the parade an “excellent target.” The group has encouraged readers of its online magazine Rumiyah to use motor vehicles to kill and injure people, similar to the way a Tunisian-born terrorist killed more than 80 people at a Bastille Day celebration in Nice, France.

The sand trucks weigh 16 tons and twice that when filled with sand, making them difficult to move even if rammed by large vehicles.

Islamic State, which controls swaths of Iraq and Syria and seeks to inspire attacks by others abroad, claimed responsibility for the July 14 attack in Nice.

“We are aware of some of the reports that have been out there, but I want to assure all New Yorkers there’s no credible and specific information of any specific threat directed toward this parade,” New York Mayor Bill de Blasio told a news conference on Wednesday.

Police have also used the sand trucks to protect nearby Trump Tower, the home and campaign headquarters of President-elect Donald Trump.

The parade, due to begin at 9 a.m., will start in Central Park and run down Sixth Avenue, one block from Fifth Avenue where Trump Tower is located, and end near the Macy’s department store on 34th Street.

“The NYPD is ready,” de Blasio said. Police have been preparing “literally since the end of last year’s parade,” he said.

This year police will ban vehicular traffic from crossing the parade route, unlike in past years when a few cross streets were open, requiring the trucks and 114 smaller blocker cars.