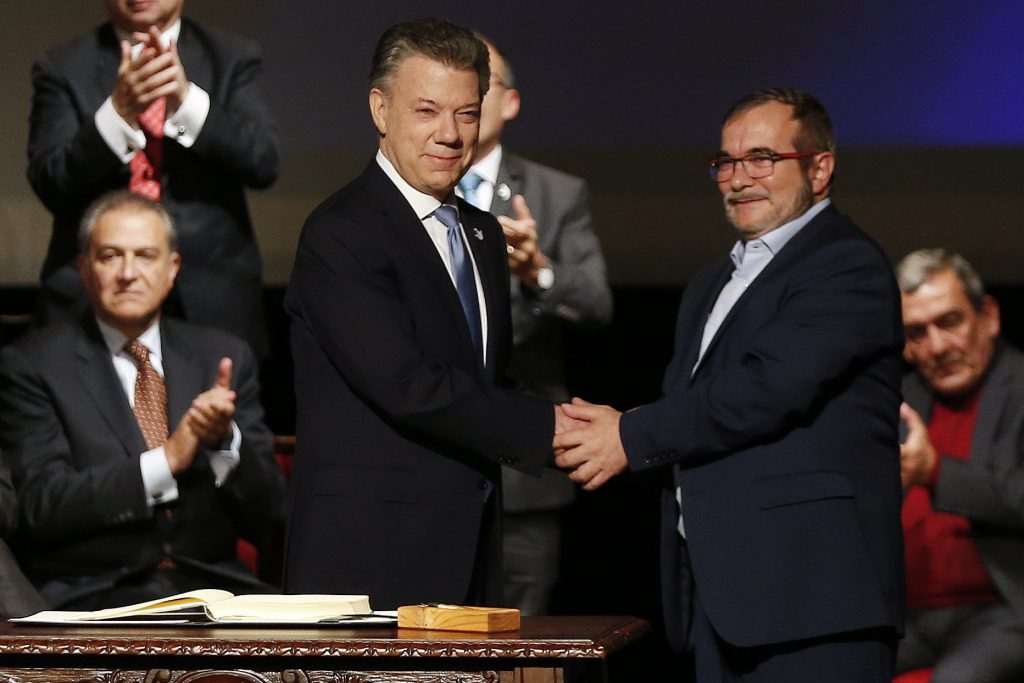 Colombian President Juan Manuel Santos signed a revised peace agreement with the country’s largest rebel movement on Thursday, making a second attempt within months to end a half century of hostilities.

Santos and Rodrigo Londono, leader of the Revolutionary Armed Forces of Colombia, signed the 310-page accord at Bogota’s historic Colon Theater — nearly two months after the original deal was surprisingly rejected in a referendum.

After signing with a pen crafted from the shell of an assault rifle bullet, they clasped hands to shouts of “Yes we could!”

Thursday’s hastily organized ceremony was a far more modest and somber event than the one in September, in the colonial city of Cartagena, where the two men signed an accord in front of an audience of foreign leaders and United Nations Secretary General Ban Ki-Moon, all of whom were dressed in white to symbolize peace.

Santos looked and sounded tired after a two-month political roller coaster that saw him rise from the humiliating defeat to win this year’s Nobel Peace Prize. This time the deal will be sent directly to Congress without a public referendum.

He tried to inject a dose of optimism about the hobbled accord whose outlook for implementation is shrouded in uncertainty.

“In 150 days — only 150 days — all of the FARC’s weapons will be in the hands of the United Nations,” he said during the only part of his speech that drew applause from the audience of a few hundred local politicians and officials.

FARC leader Londono used his address to call for a transitional government to ensure the accord is effectively implemented, a suggestion immediately denounced by the opposition as a veiled attempt to extend Santos’ tenure past elections in 2018, when he’ll be constitutionally banned from competing. The rebel leader also congratulated Donald Trump on his victory and called on the president-elect to continue strong U.S. support for Colombia on its path to peace.

“Our only weapons as Colombians should be our words,” said Londono, better known by his alias Timochenko, in a 15-minute speech. “We are putting a definitive end to war to confront in a civilized manner our contradictions.”

The new accord introduces some 50 changes intended to assuage critics led by still-powerful former President Alvaro Uribe. They range from a prohibition on foreign magistrates judging crimes by the FARC or government to a commitment from the insurgents to forfeit assets, some of them amassed through drug trafficking, to help compensate their victims.

But the FARC wouldn’t go along with the opposition’s strongest demands — jail sentences for rebel leaders who committed atrocities and stricter limits on their future participation in politics.

In an act of protest, members of Uribe’s political party are considering a boycott of next week’s scheduled debate in Congress on ratifying the agreement, accusing the legislature of disobeying the constitution. They’re also threatening to call for street protests to denounce what they say is a “blow against democracy.”

“The government preferred to impose itself in a way that divides Colombians instead of a national pact that would bring us together,” Uribe’s Democratic Center party said in a statement Wednesday.

The lack of broad support for the accord will make the already-steep challenge of implementing it even tougher.

Colombians overwhelmingly loathe the FARC for crimes such as kidnappings and drug-trafficking. Ensuring that the 8,000-plus fighters don’t wind up joining criminal gangs rampant throughout the country, or the much-smaller National Liberation Army, will also test the state’s ability to make its presence felt in traditionally neglected rural areas at a time of financial stress triggered by low oil prices.

There’s also a risk that peace could trigger more bloodshed, as it did following a previous peace process with the FARC in the 1980s when thousands of former guerrillas, labor activists and communist militants were gunned down by right-wing militias, sometimes in collaboration with state agents.

That fear, although less prevalent than in the darker days of Colombia’s half-century conflict, has become more urgent with more than a dozen human rights defenders and land activists in areas dominated by the FARC being killed by unknown assailants since the initial signing ceremony in September.

Santos this week held an emergency meeting with his cabinet and U.N. officials to discuss the murders, taking an opportunity to reinforce his message that peace can’t wait. So far this year, 70 have been killed, according to Bogota-based We Are Defenders, more than in all of 2015 and 2014.

“We couldn’t delay implementation a single minute longer,” Santos said in his speech, alluding to the risk of a ceasefire falling apart if negotiations were allowed to stretch on.

Once signed, Santos will introduce the accord to Congress, where a solid majority in support of peace is expected to ratify it as early as next week. Lawmakers will then embark on the nettlesome task of passing legislation so the guerrillas can begin concentrating in some 20-plus demobilization areas where they will begin turning over their weapons to United Nations-sponsored monitors.