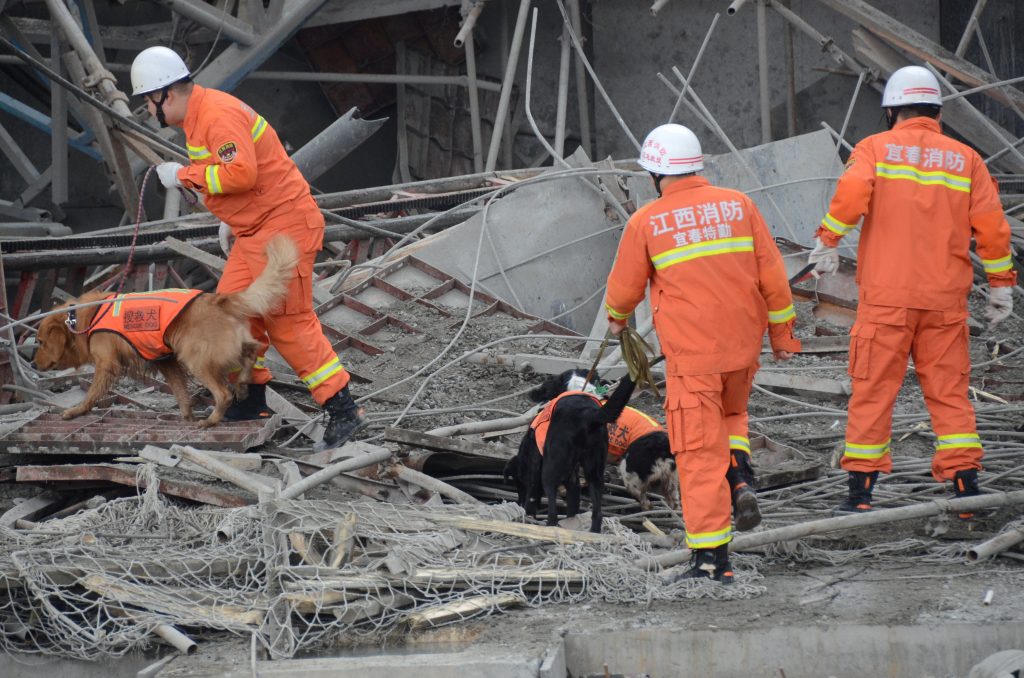 Scaffolding at a construction site in eastern China collapsed into a deadly heap on Thursday, sending iron pipes, steel bars and wooden planks tumbling down on about 70 workers in the country’s worst work-safety accident in over two years.

At least 67 people were killed by the collapse of the work platform at a power plant cooling tower that was under construction, state media reported. Two others were injured and one worker was missing.

The cooling tower was being built in the city of Fengcheng in Jiangxi province when the scaffolding tumbled down at about 7:30 a.m., an official with the local Work Safety Administration who would only give his surname, Yuan, said by telephone.

The reported death toll suggested that nearly all the construction workers at the cooling tower perished. Close to 70 people were working at the site when the scaffolding gave out, according to local media reports.

About 500 rescue workers, including paramilitary police officers, were digging through the debris with their hands, according to state broadcaster CCTV. It showed debris strewn across the floor of the cavernous, 545-foot-high concrete cooling tower, in the middle of which stood an unfinished structure.

Rescue dogs were seeking to locate survivors or the bodies of victims, while backhoes shifted wreckage to the margins of the massive round tower.

Chinese President Xi Jinping urged local governments to learn from the accident and hold those responsible accountable. He said that in the wake of recent work accidents, the State Council, China’s Cabinet, should carry out thorough inspections of work sites to reduce risks.

China has suffered a series of major industrial accidents over recent months blamed on corruption, disregard for safety and pressure to boost production amid a slowing economy.

The head of a logistics company was recently handed a suspended death sentence over a massive explosion at an illegal chemical warehouse in the northern port of Tianjin last year that killed 173 people, most of them firefighters and police officers.

In June 2015, 442 people were killed in the capsize on the Yangtze River of a modified cruise ship that was blamed on poor decisions made by the captain and crew, while 81 people were killed in December when an enormous, man-made mountain of soil and waste collapsed on nearly three dozen buildings in the southern manufacturing center of Shenzhen.