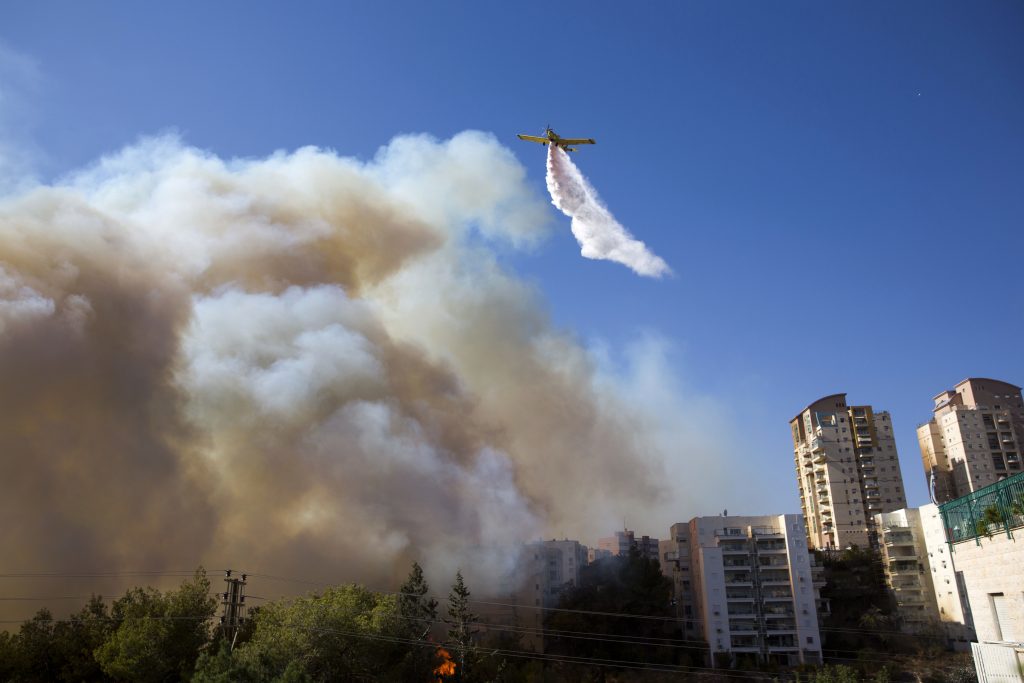 After battling hundreds of blazes in forests and open areas, Israeli firefighters were called in to fight a major fire in a city – Haifa, where hundreds of residents of more than half a dozen neighborhoods in the center of Mount Carmel were being evacuated from their homes. The fire broke out Thursday morning and quickly spread, due to the extremely dry conditions and high winds.

In an interview on Channel Two, Haifa Mayor Yona Yahav urged residents “not to spread the fires of hate in the city.” Yahav spoke against spreading rumors that Arabs had been seen setting fires in Jewish neighborhoods of the city, and of alleged planned actions by Jewish residents against Arabs.

However, the impression that the fires were deliberately set as acts of terrorism was reinforced by a report by the NRG news site, which presented dozens of social media posts in Arabic that expressed happiness over the fires. On one forum discussing the proposed law to prevent mosques from broadcasting their call to prayer in the early morning hours, one post said that the Israelis “tried to prevent the mosques from conducting prayers, now they are burning up.” Another post said that “this is our land, and Israel will continue to burn until we return free to it.” A social media tag in Arabic, “Israel is burning,” was trending on Thursday.

Many residents of the Romema and Ramot Sapir neighborhoods were evacuated as firefighters continued to attempt to prevent the fire from spreading. Nine people were being treated for smoke inhalation, and the northeast entries to the city have been shut down. Another blaze was burning closer to the shore, at Shemen Beach – ironically, adjacent to the main Haifa fire station. Yet a third fire was burning near Haifa Stadium. Students were evacuated from Haifa University, and the Technion was set to be evacuated as well. Officials said that the fire in Haifa was “unprecedented,” the biggest fire ever to strike an Israeli city.

Several of the promised firefighting planes from foreign countries arrived in Israel Thursday morning, and officials have wasted no time putting them to work, dousing the blaze in Haifa from the sky. Numerous buildings in the city have burned down already, and a thick cloud of smoke was blanketing many of the areas of the city. Fire officials said that twelve planes were flying over the city, dropping flame retardants on the blazes in an attempt to bring them under control.

Besides Haifa, fires broke out in Nazareth and in Ashdod. In Nazareth, firefighters were battling three different blazes, and a school in Ashdod was evacuated as flames approached it. In Talmon, a fire that was brought under control earlier Thursday has reignited, and several homes were on fire there as well.

Since Wednesday morning, a total of 220 fires had broken out in Israel – far too many to be a “coincidence,” many officials believe. Police officials were quoted by Channel Two as saying that Israel was “experiencing a wave of arson.” Public Security Minister Gilad Erdan said Thursday that “half of the fires are being deliberately set,” and ordered police and Border Guards to patrol open areas and forests in the hope of finding who is setting the fires.

Meanwhile, Turkey joined the list of countries that have offered assistance in helping Israel fight the fires. Prime Minister Binyamin Netanyahu expressed gratitude for the Turkish gesture. Equipment and crew are due to arrive in Israel from Russia, Italy, Greece, Cyprus and Croatia. At least eight planes carrying ten tons of fire-dousing foam are on their way, along with the Russian Beriev Be-200 emergency aircraft, an amphibious plane that can land on a lake or sea and within minutes take in over 12 metric tons of water, which it can then drop on flames.