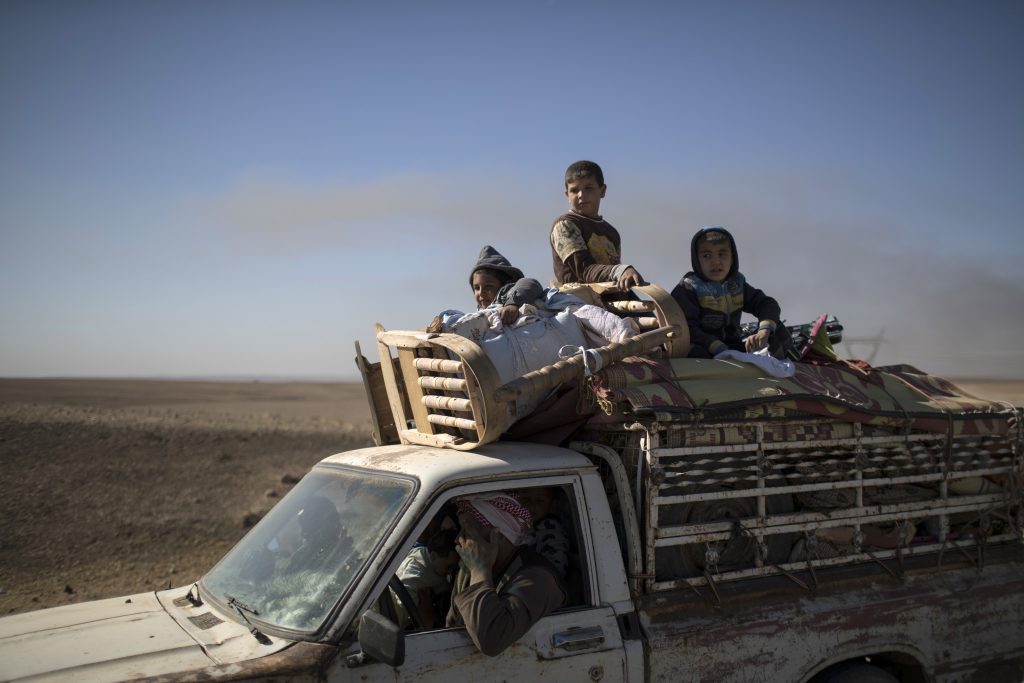 Thousands of Iraqi civilians have fled Tal Afar as Shiite paramilitary groups close in around the Islamic State-held town on the road between Mosul and Raqqa, the main cities of the terrorist group’s self-styled caliphate in Iraq and Syria.

The exodus from Tal Afar, 40 miles west of Mosul, is worrying humanitarian organizations, as some of the civilians are heading into insurgent territory, where aid cannot be sent to them, provincial officials said.

About 3,000 families have left the town, with about half heading southwest, towards Syria, and half northward, close to Kurdish-held territory, said Nuraldin Qablan, a Tal Afar representative on the Nineveh provincial council, now based in the Kurdish capital Erbil.

“We ask Kurdish authorities to open a safe passage for them,” he told Reuters.

The offensive started on Oct. 17 with air and ground support from a U.S.-led coalition. It is turning into the most complex campaign in Iraq since the 2003 invasion that toppled Saddam Hussein and empowered the nation’s Shiite majority.

Those fleeing Tal Afar are Sunnis, who are in a majority in Nineveh province in and around Mosul. Tal Afar also had a Shiite community, which fled in 2014 when the Sunnis of Islamic State swept through the region.

Turkey is alarmed that Iran could extend its power through proxy groups to an area close to Turkey and Syria, where Ankara is backing rebels opposed to the Russian and Iranian-backed Syrian President Bashar al-Assad.

“People are fleeing due to the Hashid’s advance, there are great fears among the civilians,” said Qablan.

Iraqi Prime Minister Haider al-Abadi tried to allay fears of ethnic and sectarian killings in Tal Afar, saying any force sent to recapture it would reflect the city’s diversity.

A prominent leader of the Popular Mobilization units said Shiite forces had linked up with Peshmerga fighters west of Mosul and completed the encirclement of the city and Tal Afar.

Abu Mahdi al-Mohandes said they had reached a junction where the Kurdish forces were deployed in Sinjar, close to Syria and west of Mosul and Tal Afar.

Islamic State still controls the road between Mosul and Tal Afar, he said in comments on the Popular Mobilization website. “This is what we are dealing with now,” Mohandes said, implying the militias would try to separate Mosul from Tal Afar.

Mosul is already ringed to the north, south and east by Iraqi government and Peshmerga forces. Iraq’s U.S.-trained Counter Terrorism Service unit breached Islamic State defenses in east Mosul at the end of October and is fighting to expand its foothold there.

The Iraqi military estimates there are 5,000 to 6,000 insurgents in Mosul facing a 100,000-strong coalition of Iraqi government units, Kurdish Peshmerga and Shiite militias.

Mosul’s capture is seen as crucial towards dismantling the caliphate, and Islamic State leader Abu Bakr al-Baghdadi, believed to have withdrawn to a remote area near the Syrian border, has told his fighters there can be no retreat.

A Mosul resident said airstrikes had intensified in western parts of the city. The strikes targeted an industrial area where Islamic State is thought to be making booby traps and car bombs.

The terrorists are dug in among more than a million civilians as a tactic to hamper airstrikes. They are moving around the city through tunnels, driving suicide car bombs into advancing troops and hitting them with sniper and mortar fire.

Iraqi authorities have not released overall casualty estimates, but the United Nations said on Saturday that growing numbers of wounded are overwhelming aid groups.

More than 68,000 people are registered as displaced by the fighting, moving from villages and towns around the city to government-held areas, according to U.N. estimates.

In some cases, men of fighting age were separated from those groups and summarily killed, residents and rights groups said.

“These victories would not have occurred if it weren’t for the cooperation of civilians with the security forces,” Abadi told a press conference in Baghdad, confirming the role of informers inside the city.

Earlier this month, the bodies of at least 20 people killed by Islamic State were hung up across the city – five crucified at a traffic junction – to warn residents against cooperating with the Iraqi military.

A taxi driver said he saw a group of women wailing under a traffic signal where the body of a young man was on display, before they cut him down, put him into the back of their car and drove away. One was crying “My son, my son!”