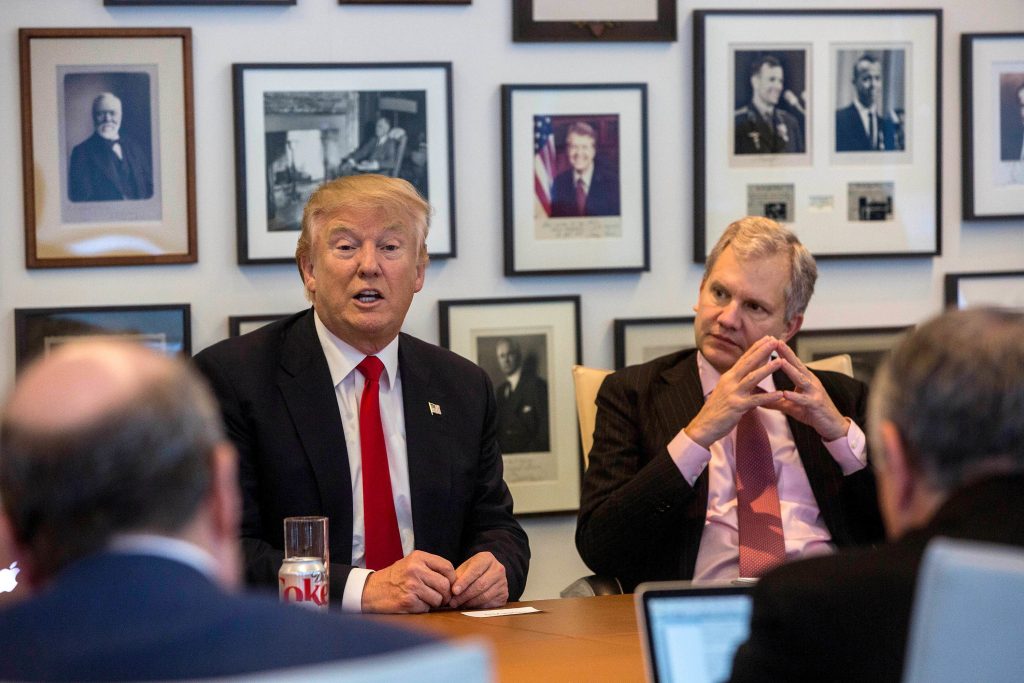 After a campaign filled with Donald Trump’s denunciations of “Crooked Hillary” Clinton, the president-elect declared Tuesday that “I don’t want to hurt the Clintons; I really don’t,” and a top adviser said he had no interest in pursuing further investigations.

Trump also said he saw no potential conflicts of interest between his new job and his worldwide businesses, and he disavowed praise and support from extremist “alt-right” groups.

The president-elect’s remarks in an interview with The New York Times were tweeted out by Times reporters.

Trump reversed his campaign trail vow to put Clinton “in jail” and seek a special prosecutor, saying he wanted to move on to his agenda of creating jobs, repealing President Barack Obama’s health care law and cracking down on people entering the country illegally. His comments were a firm suggestion to Republicans who control both houses of Congress to do the same and abandon years of probes into the former secretary of state.

“She went through a lot and suffered greatly in many ways,” Trump said, according to the Times. Going after her, he added, is “just not something that I feel very strongly about.” He predicted his supporters would not be disappointed because the Trump administration would “save our country” in other ways.

But there was some teeth-gnashing in conservative circles.

If Trump’s appointees do not follow through on his pledge to investigate Clinton for what he claimed were criminal violations, “it would be a betrayal of his promise to the American people to ‘drain the swamp’ of out-of-control corruption in Washington,” said the group Judicial Watch.

In the interview, Trump also:

– Disavowed white nationalist sympathizers who celebrated his election during a conference in Washington over the weekend. He told the Times, “I disavow and condemn them.”

– Said he saw no problems in working out any potential conflicts of interest between his companies and his White House post.

“In theory I could run my business perfectly and then run the country perfectly. There’s never been a case like this,” he said. But he also said he was “phasing that out now” and passing business operations on to his grown children.

– Said he thinks there’s “some connectivity” between humans and climate change, a reversal from his campaign trail declaration that man-made climate change is a hoax.

– Said that federal anti-nepotism laws would not prevent him from giving his son-in-law, Jared Kushner, a White House job. Nevertheless, Trump said he would want to avoid the appearance of a conflict, and may instead make Kushner a special envoy to broker peace in the Middle East. In its article about the interview, The Times quoted Trump as saying that Kushner “could be very helpful” in securing peace between the Israelis and Palestinians.

“I would love to be able to be the one that made peace with Israel and the Palestinians,” said Trump. Kushner “would be very good at it,” and “he knows the region.”

Trump said he believes a Mideast peace deal is possible.

“A lot of people tell me, really great people tell me that it’s impossible — you can’t do it,” said the president-elect. “I disagree; I think you can make peace.”

“I have reason to believe I can do it.”

The wide-ranging interview came after Trump adviser Kellyanne Conway suggested that what he said on the campaign trail may well depart from what he does as president. She said on MSNBC that Trump is “thinking of many different things as he prepares to become the president of the United States, and things that sound like the campaign aren’t among them.”

It wasn’t immediately clear whether Conway was referring only to congressional investigations, or additionally to the Justice Department. FBI Director James Comey has declared on two occasions there is no evidence warranting charges over her use of a private email account. Justice Department investigations are historically conducted without the influence or input of the White House.

He was leaving late in the day for Florida for the Thanksgiving weekend.

Trump’s reversal on further investigations of the Clintons raised questions about the gulf between his fiery campaign promises and what he intends to do as the nation’s 45th president.

Trump fueled chants of “Lock Her Up!” at campaign rallies across the country throughout his campaign and even told her face-to-face during a debate that she’d “be in jail” if he won the election. He vowed in particular to use his presidential power to appoint a special prosecutor to prosecute his Democratic rival for both her reliance on a private email server as secretary of state and what he called pay-for-play schemes involving the Clinton Foundation.

Conway suggested Trump’s new posture is aimed at Republicans in Congress who have relentlessly investigated the former secretary of state, including whether classified information passed through her private email server and how she acted in connection with the raid on the U.S. compound in Benghazi that killed four Americans.

Trump has been promising to unite the country around his presidency, saying repeatedly he will be president of “all Americans.” Not everyone is buying it – protests continue across the country – but the billionaire has been hosting a politically diverse parade of officials at his golf course in New Jersey as he’s tried to fill out his Cabinet. The visitors have included Mitt Romney, the 2012 GOP presidential candidate who called Trump unfit for office. Trump called him “a loser” who “choked.”