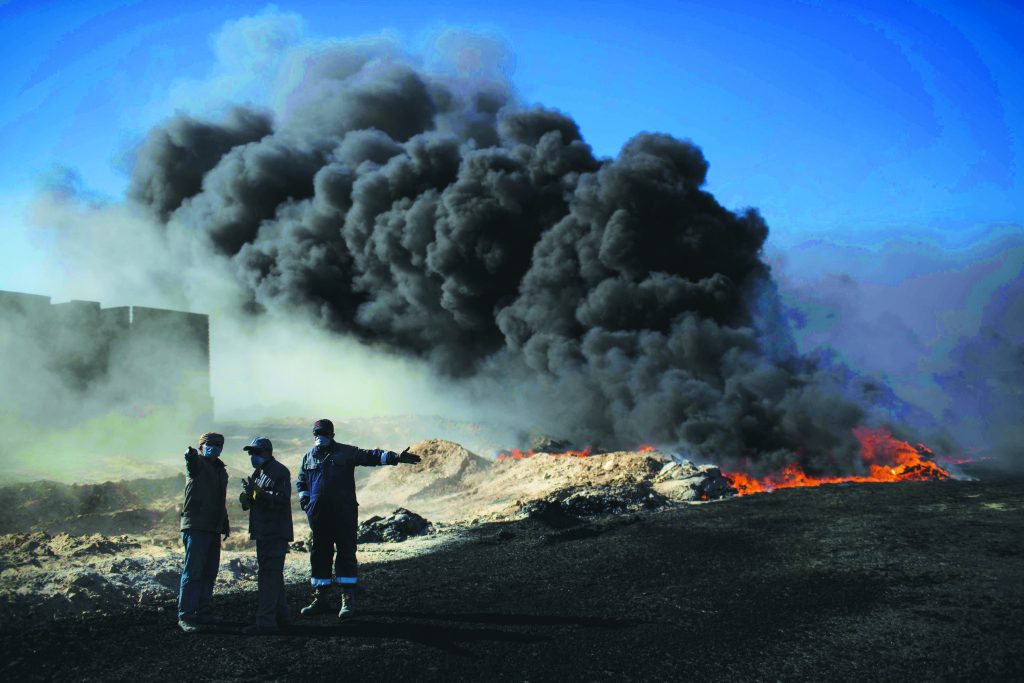 For months, residents of the Iraqi town of Qayara have lived under a dark cloud of toxic fumes released by oil well fires lit by retreating Islamic State terrorists.

But in recent days, oil workers and firefighters have extinguished the blazes closest to the populated center. The move has returned a small measure of order to Qayara, where complaints about government neglect have simmered since last summer, when the terrorists torched the oil wells as the Iraqi army drove them out.

The work is far from complete, but it could be a first step in easing some of the bitterness, anger and social fissures among people who desperately need government services and reconciliation after waves of retaliatory violence that followed the defeat of the extremists.

“The atmosphere is good. The wells are almost fully under control. They extinguished most. Some of them are still ablaze, but we see the morning, we can see the sun,” shop owner Mohannad Seoud Ahmad Matar said Tuesday. “Ten days ago, this sky was completely dark. You couldn’t distinguish day from night.”

Eight burning wells have been extinguished in recent weeks, said Oil Ministry spokesman Assem Jihad, adding that most were located near homes. The area’s 54 wells once pumped nearly 10,000 barrels a day before IS took the fields in their June 2014 onslaught when they seized a third of Iraq’s territory.

Jihad could not say how many were still burning, but from the edge of the town, at least five separate sites could be seen.

The work has taken so long because of security concerns: Terrorists initially still had fired mortars occasionally into the area, and it also had to be cleared of booby traps and unexploded ordnance left behind by IS fighters.

“The work accelerated since the security situation improved,” Jihad said. “But it’s still unclear how long it will take to finish, as there are still fires in wells and scattered oil pools.”

Droplets of oil fell from the toxic clouds on the town south of Mosul, leaving a sooty residue on clothing, houses, crops and even livestock.

In one oil field on Qayara’s outskirts, blackened bulldozers pushed dirt over the burning ground at several sites to try to smother the flames. With each push of the shovel, however, black crude flowed in a new stream, making the task seem futile.

Workers without masks wrapped their faces in scarves as protection from the smoke. Rays of sunlight that cut through thick clouds reflected off glass-like melted sand. Near one well, oil flowed downward from its source — a river of pollution portending a costly cleanup.

“it’s hot, it’s boiling, a very high temperature,” said Hussein Saleh Jibouri, a worker standing on a moonscape where black and white clouds obscured the sun and a stream of oil flowed into a valley. Some of the oil oozed into trenches to divert it from the Tigris River and inhabited areas.

Last week, the U.N. warned that the toxic smoke, which also was coming from a nearby sulfur gas factory, will have mid- and long-term effects on the health and livelihood of residents, as well as the environment. More than 1,500 people have sought medical treatment for respiratory problems.

“People usually came to our health center seeking treatment for symptoms like fever, coughing, respiratory problems, diarrhea and asthma complications,” said Dr. Tayseer Alkarim, an oncologist from the France-based group called WAHA. The NGO has been in Qayara since September to help support the only hospital in the area with medicine, doctors and nurses during the crisis.

“Now that the main oil fire is not burning anymore, the number of patients is down. So it’s an improvement from when we first came – then there was no medication or health care here.”