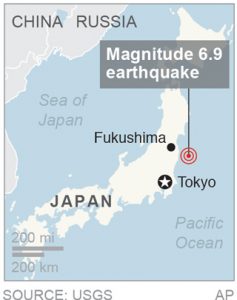 An earthquake with a preliminary magnitude of 7.3 hit northern Japan on Tuesday, the Japan Meteorological Agency said, generating a tsunami that hit the nation’s northern Pacific coast.

A 60-cm (2-foot) tsunami had been observed at Fukushima’s Onahama Port, and a 90-cm (3-foot) tsunami at Soma soon after, public broadcaster NHK said. The region is the same that was devastated by a tsunami following a massive earthquake in 2011.

A tsunami warning of up to 3 meters (10 feet) has been issued.

Tokyo Electric Power Co, known as Tepco, said on its website that no damage from the quake has been confirmed at any of its power plants, although there have been blackouts in some areas. Tepco’s Fukushima Daiichi nuclear plant caused Japan’s worst nuclear disaster when it was knocked out by the 2011 tsunami.

The March 11, 2011, quake was magnitude 9, the strongest quake in Japan on record. The massive tsunami it triggered caused world’s worst nuclear crisis since Chernobyl a quarter of a century earlier.

An Iwaki city fire dept official said there was smoke or fire at Kureha’s research centre in a petrochemical complex in Iwaki city at 6:17 a.m., but it was extinguished at 6:40 a.m. Other details were not clear, he said, adding that no other major damage in the city has been reported at the moment.

One hotel in Ofunato, badly hit by the 2011 quake, told guests to stay in the facility, which is on high ground.

The U.S. Geological Survey initially put Tuesday’s quake at a magnitude of 7.3, but downgraded it to 6.9.

All nuclear plants on the coast threatened by the tsunami are shutdown in the wake of the Fukushima disaster. Only two reactors are operating in Japan, both in the southwest of the country. Even when in shutdown nuclear plants need cooling systems operating to keep spent fuel cool.