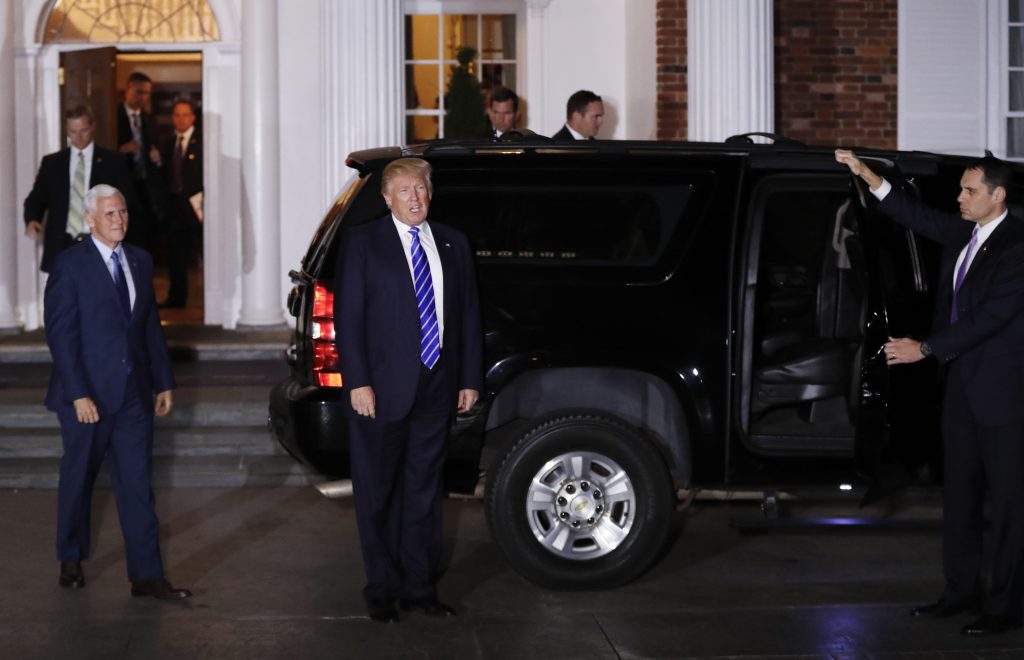 President-elect Donald Trump is welcoming a parade of officials at the white-pillared clubhouse of his New Jersey golf club this weekend as he weighs who will be in line for roles in the new administration.

Setting a rancorous year aside, the pugnacious billionaire put on a smiling show of goodwill Saturday with former rival Mitt Romney. But Trump did not reveal or indicate whether the 2012 Republican nominee could be in line for a cabinet post.

He also met with education activists Michelle Rhee and Betsy DeVos, as well as retired Marine Gen. James Mattis, considered a contender to lead the Pentagon.

Trump said he may announce some of his picks on Sunday.

Both Romney and Trump were positive about their sit-down, a marked shift in tone after a year in which Romney attacked Trump as a “con man” and Trump labeled him a “loser.” But the two have started to mend fences since Trump’s victory over Democrat Hillary Clinton.

Trump’s initial decisions suggest a more aggressive military involvement in counterterror strategy and a greater emphasis on Islam’s role in stoking extremism. Sessions, who is best known for his hard line immigration views, has questioned whether terrorist suspects should benefit from the rights available in U.S. courts. Pompeo has said Muslim leaders are “potentially complicit” in attacks if they do not denounce violence carried out in the name of Islam.

Pompeo’s nomination to lead the CIA also opens the prospect of the U.S. resuming torture of detainees. Trump has backed harsh interrogation techniques that President Barack Obama and Congress have banned, saying the U.S. “should go tougher than waterboarding,” which simulates drowning. In 2014, Pompeo criticized Obama for “ending our interrogation program” and said intelligence officials “are not torturers, they are patriots.”

Sessions and Pompeo would both require Senate confirmation; Flynn would not.